A.G. Industries has just invented the Anti-Gravity Belt. When you put this amazing new product around your waist and turn it on, you will be lifted off the ground as high as three feet! How will consumers react to this innovative product? Different classes of consumers will adopt this product at different times throughout the lifecycle of the new product. This adoption process follows a recognizable pattern and is known as the product adoption lifecycle.

The product adoption lifecycle describes the way a new product progresses through its lifespan, from the time it is first introduced to the marketplace until it is no longer available. New products are initially adopted by 'innovators' who represent 2.5% of the market. The next class of consumers who will adopt the product are the 'early adopters' who make up 13.5% of the market. They are followed first by the 'early majority,' and then by the 'late majority,' who each represent 34% of the market. As the product enters its final stage of the product adoption lifecycle, it is adopted by 'laggards,' who make up the final 16% of the market. Now that you know about the five different classes of adopters, let's talk a little more about each of these five groups of consumers. 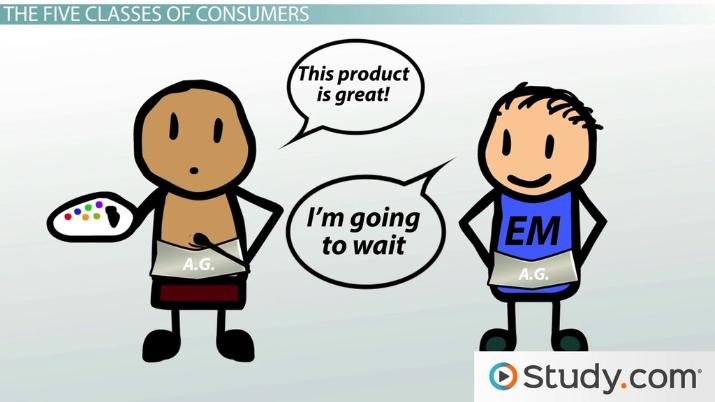 Coming up next: Product Life Cycles: Development, Design and Beyond

The Five Classes of Consumers

Innovators - Venturesome; although they make up a very small part of the total market, innovators play a very important role. They are interested in anything new, and are quick to adopt new and innovative products. Innovators knew about the Anti-Gravity Belt months before it was introduced and paid a high price to be among the first to have this new product.

Early adopters - Young and restless; early adopters are opinion leaders. They pay attention to what the innovators have discovered and find a practical use for the innovation. They then communicate to their followers the usefulness of the new product. They play a very important role by influencing the attitude and changing the behavior of the later adopters. An early adopter who is a house painter learned about the Anti-Gravity Belt from an innovator and bought one to help him paint ceilings. He told all his colleagues how much easier and faster he could paint high places with his new Anti-Gravity Belt.

How Marketers Use the Product Adoption Lifecycle

In order for companies who introduce new products to be successful, they must understand how the five classes of consumers adopt their innovations. Some products are quick to pass through the adoption lifecycle and some take decades, but they all are adopted through the same process.

Companies must first find the innovators of their new product, and direct their promotional message at them. As the innovation gains momentum and is accepted by the early adopters, marketers must understand that this group of adopters will determine if their new product is a success or a failure. The early adopters must find a practical use for the product and communicate the benefits to the later adopters in order for the product to progress to the early majority. As the later stages adopt the innovation, marketers must understand that price will play a more important role in buying decisions and must convince buyers that their product will have value to them.

In summary, when a new product is introduced to the marketplace, five recognizable groups of consumers will adopt the innovation at different times and for different reasons. The five types of consumers are:

Innovators - Venturesome; innovators are the first to adopt a new product. They are willing to pay a high price to be the first to have something new.

Late majority - Skeptics; the late majority will not adopt a new product until it has already been accepted by a majority of consumers.

Laggards - Traditionalists; laggards will only adopt a new product if they feel like they have no other choice.

Following this lesson, you will be able to:

Laggard in Marketing: Overview & Examples | What is a Laggard?

How a New Product is Adopted by Consumers

B2B vs. B2C: How Business Marketing Differs from Consumer Marketing

Goals of Promotion and the Marketing Mix