In this lesson, we're going to explore the three major influences on early medieval art: Christianity, the classical world of Rome and the pagan North. We'll talk about the contributions of each and see how they come together in some works of art.
Create an account

A Meeting of Worlds

Welcome! My name is Matthew, and I'm a monk and an artist who lived in Europe in the early Medieval period. Today I'm going to talk to you about the three major influences on early Medieval art: Christianity, the classical world of Rome and the pagan North. To help me, I'm calling in a couple friends: Marcus, who is a Roman, and Osmund, who is an Anglo-Saxon. Together, we'll explain how our worlds met and our traditions meshed to form the unique art of the early Medieval world. 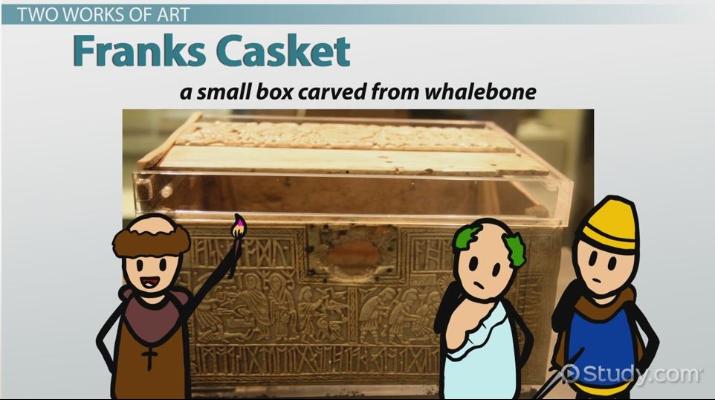 First off, early Medieval art is distinctly Christian. Its subject matter nearly always depicts religious figures and scenes. Just take a look at a couple of these works of art. The first is a page from the Book of Kells, which is an illuminated manuscript of the Gospels that was written and decorated by hand by monks, like me, about 800 CE. This page shows Jesus Christ enthroned as a king and a teacher of the word of God. He is surrounded by saints and angels as well as Christian symbols, like the cross and the peacock (a symbol of eternal life).

Our second work is an ivory panel carved with relief sculptures that depict the miracles of St. Remi, including the raising of a young girl from the dead and the baptism of Clovis, who was a Fifth Century Frankish king.

Can you see how Christianity dominates the subject matter of this art? Often, the Christian faith even determined the forms of early Medieval art. Illuminated manuscripts are a good example of that. They turned the Bible into exquisite works of art, and they are often covered with precious metals, jewels and carved ivory. Early Medieval artists also created a wide range of liturgical vessels, like chalices and patens (small plates), used in Christian worship as well as High Cross sculptures that still dot the Irish landscape and, of course, decorations for many churches that often took the forms of elaborate mosaics and fresco paintings.

Now, I'm going to turn our discussion over to Marcus the Roman, who will tell you more about the classical influences on Christian art.

Thanks, Matthew. Indeed, we classical Romans contributed all sorts of things to early Medieval art. For one thing, we gave it many of its forms. Relief sculptures, frescoes, mosaics and freestanding sculptural forms all came from us. We provided architectural forms for churches, too. The basilica, which was a common church form in the early Medieval period, was originally a Roman building that we used for judicial proceedings and other public gatherings. Christians borrowed architectural details, like columns and arches, from us, too and used and adapted them freely in their churches and other buildings. We even provided the language of early Medieval art and worship. All those Scriptures in those illuminated manuscripts are written in Latin.

The Holy Roman Emperor, Charlemagne, who ruled a good chunk of Europe in the late Eighth and early Ninth Centuries, was especially keen on reviving classical Roman forms and styles. He built his palace complex after the Roman model, complete with a Roman-style forum, theater, senate and even bathes. His chapel was Roman in style and decoration with an octagonal plan and features like arches, columns, mosaics and classical moldings. Charlemagne was so taken with Roman art that he even commissioned an equestrian statue of himself so he could be memorialized like Roman emperors, who were often captured realistically seated on horseback. Finally, Charlemagne was dedicated to preserving culture, and his scholars did their best to transcribe classical and Christian texts, often in Latin illuminated manuscripts. The figures in these texts exhibit more realism than manuscripts created in other areas, again adopting the Roman traditions of shading and perspective to make figures seem more 3-dimensional.

Now it's my turn! I'm Osmund the Anglo-Saxon, and my culture on the British Isles made some important contributions to early Medieval art, too. Take another look at that page from the Book of Kells. Do you see all the intricate patterns in the frames and on the figures' clothing? They come from us. We Anglo-Saxons and our neighbors, especially the Celts, developed these intricate patterns in our metalwork. We love making things complex and eye-catching, and our patterns often include interlacing knotwork, serpentine (twisting and turning) ornaments and stylized animals. These all transferred right over to early Medieval art, especially in the illuminated manuscripts and the High Cross sculptures of Ireland.

Before we end, let's take a look at a couple works of art that show how these Christian, classical and Northern influences all come together. First, we have the Franks casket, a small box carved from whalebone. The artist who created it in the Eighth Century CE deliberately blended Christian scenes, like the adoration of the magi, with depictions of Roman myths, like that of Romulus and Remus, and traditional Germanic stories. He also combined Northern runes with Latin letters.

Our second example is the Book of Durrow, an illuminated manuscript created in the Seventh Century CE. Its pages clearly show its Christian focus, as it contains the Gospels, but it also has a Roman influence in its Latin language and a Northern contribution in its intricate knotwork and animal motifs.

The classical world of Rome also made an important contribution to early medieval art. Many artistic forms, like relief sculptures, frescoes, mosaics and freestanding sculptures, came from Roman traditions as did architectural forms, like the basilica, and details, like columns and arches. Even the Latin language used in Christian Scripture and worship was a Roman contribution. Charlemagne was especially interested in reviving classical Roman forms, styles and culture.

The cultures of the pagan North, including the Anglo-Saxons and the Celts, added their intricate patterns and designs to early Medieval art. Their knotwork, serpentine ornamentation and animal motifs, which originated in metalwork, show up frequently in illuminated manuscripts and High Cross sculptures.

Finally, we examined two works of art that show how all of these influences come together: the Franks casket and the Book of Durrow. We hope you've learned something valuable about early Medieval art in this lesson. This is Matthew the monk, Marcus the Roman and Osmund the Anglo-Saxon thanking you for your attention and wishing you a good day.

After going over this lesson's details, you could have the knowledge required to:

The Influence of Metalwork on Early Medieval Painting & Sculpture