One of the most common types of analogies are classification analogies, which compare terms according to categories. In this lesson, we'll look at how to identify and solve them. Updated: 11/11/2020
Create an account

To help someone understand the definition of a thing, you can, of course, simply cite the definition. But sometimes people understand comparisons much better. Analogies are a useful method for understanding a relationship between different terms. 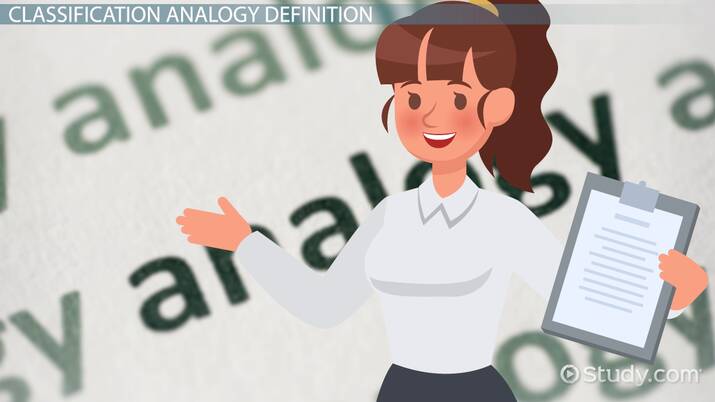 Coming up next: Part to Whole Analogies: Definition & Types

Like any other analogy, following a logical process is the key to being able to solve a classification analogy. First things first: look at the completed side of the analogy. Attempt to understand the relationship between those terms. As is true with all analogies, if you can describe that relationship in a sentence, you will be in a much better position to solve the entire analogy. The more detail you can put into describing the relationship the better, but know that the other side of the analogy may not be exactly the same type of relationship.

From there, determine what part of the missing analogy is not present. There will be something missing, either a category (group), or member. It should coordinate with the completed part of the analogy; in other words, if you think of each part as numbered (1:2::3:4), the 1 and 3 parts will be the same (either a member or a group), and the 2 and 4 parts with be the same. Put another way, _____:Bird::Tuna:Fish, the blank and Tuna are member parts, while Bird and Fish are group parts.

Now let's look at how to solve classification analogies. We'll start with a member missing, then we'll try a group missing.

First, look at the completed part of the analogy. Cells tend to be the smallest part of life studied in biology. Now which part is missing? The member side of equation. In that case, what is the smallest part that is studied in Chemistry? If you guessed atoms, you're right!

Let's move on to a classification analogy that is missing the group.

Again, start with establishing the relationship on the known side of the analogy. Numbers are the building blocks of math. So what field has notes as a building block? Music!

All right, let's take a moment to review what we've learned in this lesson. Classification analogies are a type of analogy that compare terms according to what group they belong. To solve classification analogies problems, first identify the relationship between the terms on the completed side of the analogy. From there, find out what part of the analogy is missing, whether it's a group or just a member. If you can describe that relationship in a sentence, you will be in a much better position to solve the entire analogy. Finally, answer the analogy by trying to find the most appropriate term that fits the relationship.

Analogy Types & Examples | What is an Analogy?

Using Structural Analysis to Determine the Meaning of Words

Understanding Words By Their Relationships

How to Interpret Generalizations of a Passage

What is an Almanac? - Definition & History