Amy has taught and tutored college-level English; she has a master's degree from Colorado State University in rhetoric and composition.

One of the many things that movies and TV get wrong about teaching is that in real life, teachers don't scrawl giant messages like 'See me!' and 'A++' in red pen on students' papers. Instead, we circle or underline passages and write encouraging notes to help students improve their writing: 'Cliché! Let's find another way to say this!' or 'This doesn't make sense!'

Three of the many writing traps we teachers urge our students to avoid are clichés, paradoxes, and equivocations. An overused phrase, or cliché, isn't as effective as a fresh one, just as the illogical or contradictory language of paradoxes and equivocations can be confusing and undermine an essay's overall argument.

While English teachers everywhere would want you to avoid illogical ideas or worn-out expressions in your essays, sometimes authors of poetry and fiction use these types of writing to their advantage. For example, a novelist might show a person is particularly boring or annoying because she only talks in clichés. 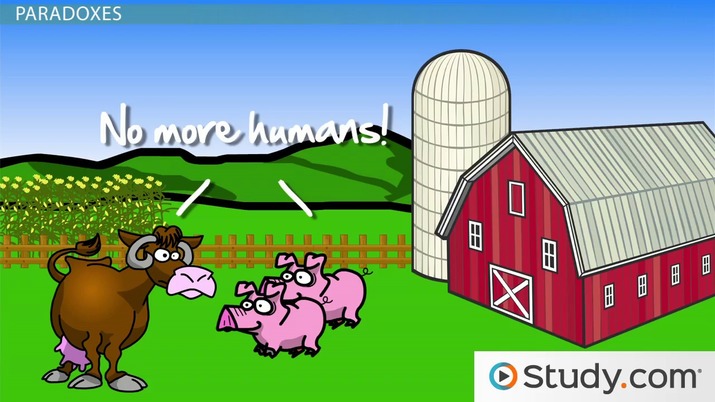 Coming up next: Similes in Literature: Definition and Examples

Clichés are elements of a literary work, from descriptions to plot points, which have lost their impact through overuse. You don't have to work hard to think of a cliché. Just recall any phrase often said about love or how the villain gives away his entire plan to the hero right before that very plan is thwarted. We know clichés because we've seen them a lot.

When a poet writes how a woman has hair like silk or skin like porcelain, we tend to think the poet isn't very creative or original. Haven't we heard that one a million times before? Same goes for overly familiar plots and characters. We readers can become frustrated when we feel like something is predictable.

Even Shakespeare acknowledged poetic clichés back in the Elizabethan era. Here are selected lines from one of his poems, a sonnet first published in 1609:

My mistress' eyes are nothing like the sun;
Coral is far more red, than her lips red...
I love to hear her speak, yet well I know
That music hath a far more pleasing sound.
And yet by heaven, I think my love as rare,
As any she belied with false compare.

The speaker starts out, in the nicest way possible, admitting that his mistress's eyes don't shine like the sun, nor are her lips red like coral. He also admits that music often sounds nicer than her voice. These are well worn clichés (even back then), and Shakespeare knows he can't use them. He even calls them 'false' comparisons when made by other poets. Instead, he acknowledges the clichés as uninventive and still manages to flatter her as only a great writer can.

Another writing pitfall teachers would urge you to avoid are paradoxes. A paradox is a contradiction that at first glance appears to make sense, but which, upon further reflection, is seen as illogical.

One example of a paradox is from George Orwell's Animal Farm (1945): 'All animals are equal, but some animals are more equal than others.'

Sure, all animals can be equal, but how can they be more equal? In this case, the paradox serves the plot of the novel. Animal Farm begins when the animals of Manor Farm rise up against their human masters and decide to form a new society based on equality. When the pigs grow in power over the other animals, they defend their privilege with the contradictory slogan, 'All animals are equal, but some animals are more equal than others.' While the paradoxical argument wouldn't work in an essay, it powerfully underscores the message Orwell is trying to get across.

Probably the most well-known paradox from literature is a 'catch-22', from the novel of the same name by Joseph Heller. In Catch-22, a military doctor sees a lot of pilots who are mentally unfit to fly planes in a war. When asked why these pilots aren't grounded, he says that if a pilot asks to be grounded, the pilot is seen as mentally competent, because he is sane enough to ask to be grounded in the first place.

The term 'catch-22' is often used more generally to describe a specific type of paradox where a person can't avoid a problem due to constraints that often caused the problem. One common example is how you can't get a job unless you have work experience, but you can't get work experience without a job.

Another type of illogical thinking that will get you in trouble with your English teacher is the use of an equivocation, the misleading use of a word or a string of words, often using alternate meanings. Equivocations usually occur as strings of sentences that, like a game of telephone, get further and further from the truth of the original statement.

One type of equivocation is referred to as 'better than nothing,' which relies on the shifting meaning of the word nothing. Here is an example:

Not many people would agree that cabbage is better than ice cream, but equating the different meanings of the word nothing makes for a very illogical argument.

The Queen said, 'The rule is, jam to-morrow and jam yesterday - but never jam to-day,'
'It must come sometimes to 'jam to-day',' Alice objected.
'No, it can't,' said the Queen. 'It's jam every other day: to-day isn't any other day, you know.'
'I don't understand you,' said Alice. 'It's dreadfully confusing!'

The White Queen says Alice can have jam 'every other day,' but since 'to-day' is not 'every other day' then there is never jam. 'Never jam today' or 'jam tomorrow' is sometimes used to describe unfulfilled political promises by very posh-sounding economists, especially around taxation. However, I think we've all experienced being told 'later' and find that 'later' can be pushed back indefinitely.

English teachers urge their students to avoid clichés, paradoxes, and equivocations in their essays, because they rely on faulty logic or stale comparisons. In literature, however, clichés, paradoxes, and equivocations can be used inventively by authors, especially in poetry and fiction. A cliché is a literary element that has lost its impact because it has been used so many times before. A paradox is a contradiction which often at first glance appears to make sense. Finally, an equivocation is the use of faulty logic where one meaning of a word is confused with an alternate meaning.

You have been asked by your local newspaper to write a review of your favorite movie. Your article, which should be at least 300 words, should include at least one cliché, one paradox, and one equivocation. After writing your article, underline each example of a cliché, paradox, and equivocation included. Then, consider what the effect these devices have on the audience, thinking about how the tone of the overall article may change if these devices were not included.

What is Symbolism in Literature? - Definition, Types & Examples