Earth has numerous climates, which relocalized patterns of meteorological conditions, and no two places have the same climate, although there are similarities. Learn about the five major climates in climate classification systems and the characteristics of each classified climate based on their global distribution. Updated: 09/27/2021
Create an account

Earth Has Many Climates

No two places on Earth will have exactly the same climate, which is the overall pattern of meteorological conditions, such as temperature, humidity, air pressure, wind and precipitation. If this sounds a lot like weather, it's because climate is basically the long-term weather patterns of an area. While weather is a more day-to-day view of these variables, the climate of an area is these variables over a long period of time.

Though no location on Earth will have exactly the same climate as another, many do have very similar climatic characteristics. In fact, these characteristics were first classified in 1884 by a Russian-German climatologist named Wladimir Köppen. Named after its founder, the Köppen Climate Classification system categorizes Earth's climates into five major groups based on the native vegetation present. He based his classification system on plants because he felt that they are the best representative of the local temperature, precipitation and other variables that contribute to climate. 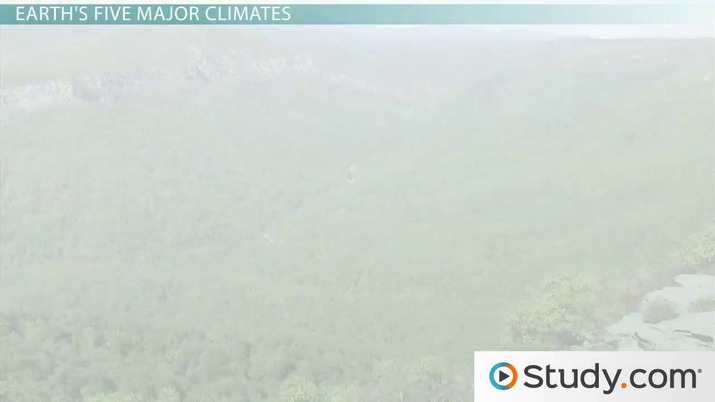 Coming up next: Natural Factors That Determine a Region's Climate

Though vegetation helps us classify the major climate types on Earth, we tend to describe them in terms of temperature and humidity. The classifications start at the equator and work their way outward, all the way to the Polar Regions. And to make it easy, the classifications are just letters of the alphabet. The first is A, which is along the equator, then B, C, D and finally E at the Polar Regions.

Group A, our first climate classification, is also known as 'humid tropical.' This is what you would expect at the equator - a warm, wet climate. Temperatures here stay pretty warm all year round (summer is the only season here!), and we also find the world's rainforests in this region, like the Amazon (you could even think of Group A for Amazon).

Group B is the next climate classification, one step away from the equator both north and south. This is also known as the 'dry' group because there is little moisture in the air here. Not surprisingly, we find the world's great deserts in this region, like the Sahara in Africa and the Great Victoria in Australia, so you could even think of Group B as the 'barren' group. Like Group A, temperatures also stay fairly constant in this region, with little seasonal change throughout the year.

Group C is our next classification, now two steps away from the equator. This group is also known as the 'humid middle latitude with mild winters' region. So, think of Group C for 'cold' since these regions do have winters (unlike Groups A and B). It's called humid because there's moisture in the air, middle latitude because it is about mid-way between the equator and the polar region (either north or south) and mild winters because while it may get cold and snowy, they are still fairly tolerable conditions. These areas have wonderful seasonal changes and occur in places like the central U.S., southern Europe and central South America.

Group D is our second to last classification, so we're getting pretty close to the poles now. You can think of these regions as Group D for 'darn cold!' because the winters are much more severe than in Group C. This group is also known as the 'humid middle latitude with severe winters' region. While closer to the poles, we're still in somewhat middle latitudes here, and the air is still moist, but man, these winters really are cold! Think of places like northern Canada and Siberia and you'll likely understand why these get the 'severe winter' classification.

Our final group is Group E, the polar group. Think 'E' for 'end of the line.' You can't go any farther than the poles! Like Group A, there's no seasonal change here but on quite the opposite end of the spectrum. As you might expect, this region is very cold all year round! Both the Arctic and the Antarctic regions of Earth are part of this climate classification.

You can probably imagine that each of these major groups can be further broken down into more specific classifications. While the major classifications broadly describe the temperature and precipitation of a climatic region, the subdivisions get really specific about certain temperature ranges and the amounts of rainfall that occur during the year. In fact, there are 14 different sub-classifications for Earth's various climates used to describe this information!

Earth is a wonderfully dynamic place. Each location is unique in both its daily and long-term weather patterns. The long-term weather patterns of an area are known as its climate. Climates are determined by variables like temperature, humidity, air pressure and wind. However, they are best expressed by the vegetation that grows here since plants are fairly specific in the living conditions they can thrive in.

From this school of thought, Wladimir Köppen created a climate classification system for Earth based on the native vegetation present, which we now call the Köppen Climate Classification. This system divides Earth's climatic regions into five groups, named A, B, C, D and E. We start with A at the equator and move through the alphabet until we reach E at the Polar Regions.

The major groups are divided based on temperature and humidity. Group A is found at the equator, so it should not be surprising that this is also known as the humid tropical group. Here we find yearlong summers and warm, wet areas like rainforests (like the Amazon). Group B is one step from the equator both north and south and is known as the dry group (think 'barren' lands). This region contains the world's great deserts because even though the temperatures may be similar to Group A, the precipitation is quite the opposite!

Group C is the group described as humid middle latitudes with mild winters because the air is much wetter than Group B, the region falls mid-way in latitude between the equator and the poles and because winters are cold but certainly tolerable (so think 'C' for 'cold' region). It's in Group D that we have the humid middle latitudes with severe winters region ('D' stands for 'darn cold!'). Like Group C, the air is relatively moist and we're still in a middle latitude range, but the winters are pretty unbearable. We find Siberia and Northern Canada under this classification.

Finally, we have Group E, the polar group. This is literally the end of the line! Just like its name suggests, this region contains both the north and south poles. Not only is the location of these regions opposite to Group A, but the climate is also dramatically different. Instead of endless summer, this area experiences endless winter. Bring your jacket if you plan to visit this region because it's about as cold as it gets on Earth!

Factors that Affect the Rate of Weathering

What is Geography? | Types & Examples