This lesson provides a basic definition of a closed system from thermodynamics. Examples are included to provide students with illustrations of closed systems that are encountered within chemistry.
Create an account

Definition of a Closed System

You have probably put soft drinks in a cooler under ice to keep them cold. When the lid of the cooler is closed, nothing can get in or out, and the insulated walls appear to keep all of the contents nice and frosty. However, if enough time passes, the ice does eventually melt into water. This is an excellent example of a closed system. What is a system, and, more to the point, what is a closed system? How are closed systems used in chemistry?

The concept of a system comes from thermodynamics, a branch of physics that studies the transfer of energy between objects and their surroundings. A system within thermodynamics is defined as part of the physical universe. The system could be a car engine, a mass of air in the atmosphere, or even a soft drink can. Systems are separated from the rest of the physical universe (or the surroundings) by a boundary that can real (such as the walls of a cooler) or imaginary, used to focus on a specific part of a complicated situation, such as the combustion cylinder within an engine. 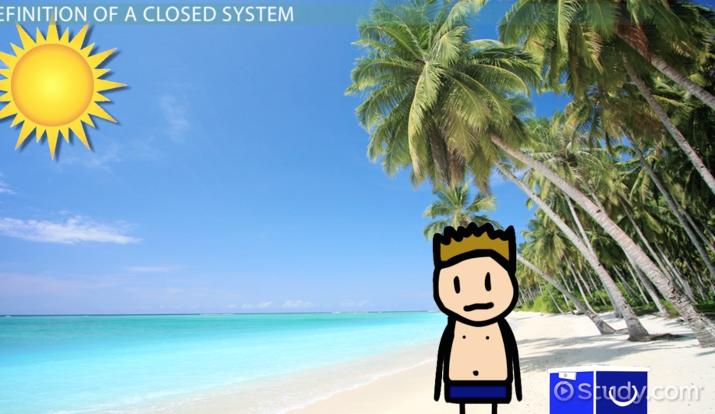 Examples of Closed Systems in Chemistry

Closed systems in chemistry are extremely useful for conducting chemical reactions, and rearranging atoms within matter to give new combinations of atoms. They are used in the laboratory as well as chemical industries such as the manufacture of medicines. The reactions occur in a special vessel known as a chemical reactor that has been sealed to prevent any matter from entering. The sealed reactor is now a closed system allowing for the careful control of the flow of energy across the walls of the reactor through heating or cooling.

Another important application of closed systems in chemistry is when measurements of the energy connected with chemical reactions need to be measured in a laboratory. The measurement of energy, also known as calorimetry, is conducted with a sealed, insulated vessel that is called a calorimeter. The sealed calorimeter, acting as a closed system in much the same way as a chemical reactor, contains thermometers that monitor changes in temperature when a reaction occurs. Based on the change in temperature, the energy of the chemical reaction is easily calculated. Calorimeters appear in a wide variety of forms from the so-called 'bomb' calorimeters used to determine the energy content of foods to simple coffee cup calorimeters that many students use in science labs.

Closed systems are defined by thermodynamics as systems that allow only energy to cross their boundary. Closed systems are used in chemistry to conduct reactions under controlled conditions in order to eliminate the accidental introduction of matter. Closed systems are also used in calorimetry, a technique that measures the energy associated with a chemical reaction.

Types of Energy | What is Energy?

What is a Metallic Bond? - Definition, Properties & Examples

What is a Calorimeter? - Definition, Uses & Equation

Changes in Heat and Energy Diagrams