The closing argument is the last thing the jury will hear and serves to point out the key themes for them to remember. Learn the outline of a closing argument, examine different argument themes, and look at various examples. Updated: 10/14/2021
Create an account

What is a Closing Argument?

Have you ever seen a courtroom television drama play out? If so, then you've probably seen one or two depictions of the dramatic closing arguments that lawyers deliver at the conclusion of a trial. These scenes are usually powerful monologues accompanied by significantly loud and dramatic music to make them memorable. 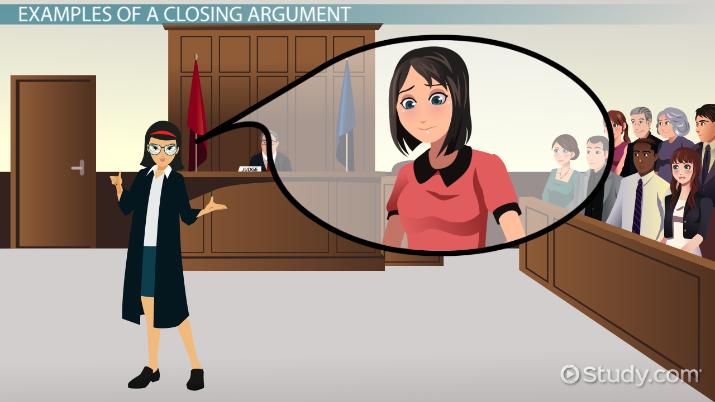 There are literally endless themes that you can use when making an argument. This is because there are so many different facts and circumstances in each case. Moreover, it depends upon whether the case is a criminal case, where the consequences of the case is a prison term and/or a fine, or a civil case, where the penalty consists of monetary damages. In other words, in a civil case, you are suing someone to get money. Each type of case will require very different types of themes.

In a criminal case, you could possibly use the following themes:

In a civil case, the themes are different because there is no criminal aspect to the case. Therefore, the themes are more widespread, depending upon the circumstances of the crime. Civil cases could use the following types of themes:

Imagine that the case involves Bob, who is on trial for the murder of his neighbor in a random drive-by shooting. The closing argument might go like this: 'In the O.J. Simpson case, the judge said, if the glove doesn't fit, you must acquit. Well, those words ring true to the case you just heard.

Bob is just your average guy who found himself in the wrong place at the wrong time. He is a married man with two kids and a beautiful wife. He loves his family and putting in a hard day of work. He grew up poor, but has done everything in his power to maintain his middle-class lifestyle and stay there. He is in the local fire department and even does weekend volunteer work at the church. He clearly is not the type of person you would think of when you think of murder. Also, Bob was nowhere near the crime scene the night of the crime. The other side has tried its best to make you think Bob was there, and has made an attempt to show you some kind of evidence, but you will see that with Bob, there is just no way to make the evidence fit the crime. So in those famous words, if the evidence doesn't fit, you must acquit.'

Next, let's look at a civil example. Imagine that Jim is a physician who is on trial for leaving a sponge inside of Mary after performing a surgery. The case is medical malpractice. The closing argument could go like this: 'Everyone thinks of Grey's Anatomy and E.R. when they go to the hospital -- the drama, the smiles and the happy endings. But in Mary's case, her hospital visit was anything but a happy ending. Mary went to the hospital for a routine day surgery and never left the hospital until one month later. Mary sustained multiple injuries and was in a coma, due to the actions of the doctor. The evidence you just heard showed how the doctor arrogantly ignored the proper medical procedure in order to hurry up and go home in time for the big game that night. He simply ignored his patient and went on his way, leaving her to endure agonizing pain and suffering. Ladies and gentlemen, this is an easy case and you have the ability to make this right for Mary and her family, to bring smiles and a happy ending to her pain.'

Closing arguments are critical components of cases in courts. They are the final statement an attorney makes to the jury or judge, when presenting a trial. There are several different points to follow during this process, including: starting with an interesting statement that gets to the heart of the matter, incorporating a theme, and discussing the facts that favors your side of the case. Some of the themes that lawyers can use are: mistaken identity, insufficient evidence and police error. It is important to commence a case with a strong closing argument in order to communicate your case and make sure the jury understands your perspective.

Termination of Easements | How to Remove an Easement from Property