Learn about the respiratory system of cnidarians, the organisms in the phylum Cnidaria. Marvel at how jellyfish, coral, sea anemones, and other members of this phylum can breathe without respiratory organs, and how they gain oxygen from the water. Updated: 11/02/2022
Create an account

Breathing underwater is impossible for us, so how do underwater creatures do it? Let's look at how the cnidarians take in oxygen even in water.

Cnidarians are some of the most beautiful creatures on Earth. Members of the phylum Cnidaria include coral, sea anemones, jellyfish, and other similar aquatic creatures like sea fans and hydras. Cnidarians are grouped based on the presence of a special type of stinging cell called cnidocytes, which are used for defense and sometimes for capturing food. While almost all live in saltwater environments, there are a few species that can be found in freshwater. 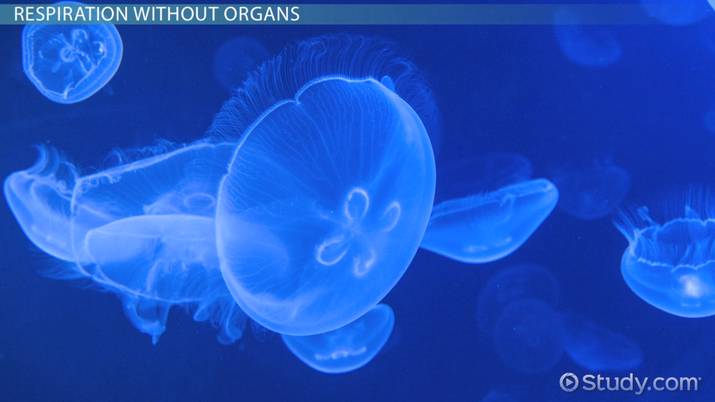 Try it now
Back
Coming up next: Endotoxins: Definition & Examples

Have you ever looked at a jellyfish and wondered where its lungs were? Given their bodies are virtually transparent, you would think that if jellyfish had lungs, we should be able to see them! As it turns out, jellyfish and other cnidarians don't have lungs or any other type of respiratory organ, so it makes sense then that we aren't able to see any obvious lungs when we look at them.

In terms of respiration, one of the biggest problems cnidarians can face is ending up in an area where the water is stagnant, or not circulating much. In these conditions, many species will die as it is hard for them to obtain the amount of oxygen they need when the surrounding water is not constantly refreshing itself.

Unlike other cnidarians, many species of coral often have symbiotic algae that live within their body structures. These symbionts share food with the coral, in exchange for the coral providing them with shelter. In the case of these types of corals, the algae often produce large amounts of oxygen, and, like in humans, too high of a concentration of oxygen can be a bad thing for cells. To combat the high oxygen concentrations, the coral produce antioxidant chemicals to help negate some of the oxygen around them.

Cnidarians are aquatic animals that contain stinging cells called cnidocytes. Respiratory systems are the body system responsible for taking in needed gases and removing waste gases. While cnidarians do not have lungs or other respiratory organs, they do use body cells to take in oxygen and expel waste gases. This can be a problem in areas with stagnant water, as the lack of circulation decreases the available oxygen.

Coral can sometimes experience an excess of oxygen around them due to oxygen production in their symbiotic algae. Coral are able to produce antioxidants to combat the high oxygen levels, which can become poisonous to them.

Cnidaria Types & Examples | What Are the Classes of Cnidaria?

Cnidaria Types & Examples | What Are the Classes of Cnidaria?