Codon recognition is tRNA's ability to match codons with the appropriate amino acids. Learn about this important part of the translation process for cells, understand its role in polypeptide assembly and protein production, and explore how tRNA and anticodons interpret the genetic code. Updated: 08/15/2021
Create an account

Translation is the process of converting the genetic information in the mRNA strand to the form of a protein. The basic unit of this genetic information is a codon. Earlier, we described a codon as a sequence of three nucleotide bases that specifies a particular amino acid. Codon recognition describes the process of matching codons to the correct amino acids. Codons are read down the length of the mRNA strand and translated into an appropriate polypeptide chain.

But when we talk about 'reading' the codons, what does that actually mean? Who is reading the sequence of mRNA codons? How are the codons being interpreted as instructions for amino acids? And who is responsible for bringing those amino acids together in the correct order specified by the genetic code? In this lesson, we're going to talk about how codons are recognized with the help of a new type of RNA. We'll study the molecular mechanics involved, and we'll practice using these molecules to make our own polypeptides. 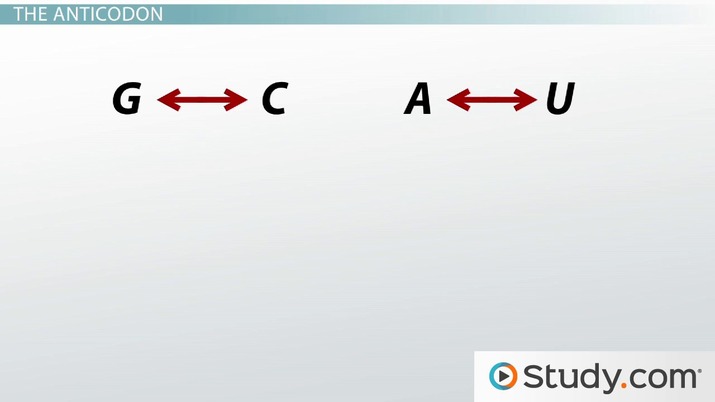 Coming up next: The Role of Ribosomes and Peptide Bonds in Genetic Translation

For example, let's say that I took a summer vacation in France and that I didn't know how to speak any French. But if I brought along my cousin, who knows both French and English, then I would have an interpreter to help me communicate. If I wanted to buy some cheese from a grocer, I could just tell my cousin, 'I want to buy some cheese.' My cousin would use her translational powers to convert my English sentence into a French one and say, 'Je veux acheter du fromage.'

In the case of genetic translation, we have a molecule that acts as an interpreter between codons and amino acids. It's a special type of RNA called transfer RNA, or tRNA for short. Transfer RNA is the type of RNA that interprets the mRNA code during translation.

When a cell is ready to have its genetic code translated into polypeptides, it first has to be prepared with all the essential amino acids. Remember, there are 20 different amino acids involved in making our proteins. Proteins can only be made correctly when the amino acids are assembled in the right order. The job of tRNA is to match up the amino acids with the correct codons in the mRNA strand.

That sounds simple enough, but how does tRNA go about matching the codons to the correct amino acids? How does it know when it's found a codon and an amino acid that are supposed to go together? Like all RNAs, tRNA is a single strand of nucleotide bases. But a tRNA is short - only about 80 nucleotides long - and it folds up on itself so that some parts are actually double-stranded. It twists into a funny shape that sort of looks like a four-leaf clover, or a T-shape. That's convenient, because it helps to remember that tRNA is shaped like a T.

At one end of the T is the attachment site for a certain amino acid. At the other end is a set of three nucleotides that match the codon that specifies the same amino acid. Note that these nucleotides on the tRNA do not make up a codon. They are, in fact, the exact opposite - an anticodon. The anticodon is a perfect complementary match to a codon. So, if the codon for serine is AGC, then the anticodon for serine is UCG. The tRNA that contains the anticodon UCG will also be the tRNA that attaches to a serine amino acid.

Okay, maybe I should back up for just a second. How did I get the anticodon for the codon AGC? Well, it's really simple; it's just like how we matched the complementary bases when we made copies of DNA in DNA replication. We also matched complementary bases when we transcribed DNA to mRNA. In translation, we're using two different kinds of RNA: mRNA and tRNA. So, we're only using the letters A, G, C, and U. G and C always pair together, and A and U always pair together. Just remember that G and C are both consonants, and A and U are both vowels.

We already knew about codon recognition before we got into all this stuff about tRNA and anticodons. But now we've begun to see the mechanics that are involved at the molecular level. So, let's go ahead and expand our definition of codon recognition. It's the ability of tRNA to match a codon to the appropriate anticodon and, therefore, the correct amino acid. tRNA recognizes the codon by using its own complementary anticodon. It's just like a lock and key; you know you have the right key when it fits into the lock.

The attachment site for the amino acid is also sitting on the tRNA. These bind together in a similar way. Since both the amino acid and the mRNA codon bind to the tRNA, then they can be brought together as an appropriate match. Just to be sure we've got everything clear, let's try an example of genetic translation. We've done it before, but this time we'll bring tRNA and the anticodons into the picture. Then we'll really get an understanding of how codon recognition works.

We'll begin with the following mRNA strand: A U G U A U C A C U A A. We'll draw a line in between each set of three bases. That's what scientists do. So, we get a total of 4 codons: AUG, UAU, CAC, and UAA. The AUG codon we know is the start codon, and it codes for methionine. So, first, we need a tRNA that matches with methionine on one end and contains the correct anticodon at the other end. The anticodon for AUG is UAC. Here's a tRNA with the anticodon UAC, and it's bringing in a methionine attached to its other end. Codon recognition happens when tRNA pairs with the mRNA inside the ribosome. And now we've gotten started with methionine.

Our last codon is UAA, which is one of the three stop codons. So, we don't need any more tRNAs or amino acids. We're done! We stop making the polypeptide, and we finish out with a chain of 3 amino acids: methionine, tyrosine, and histidine.

Then, the tRNAs carry their amino acids toward the mRNA strand. They pair onto the mRNA by way of an anticodon on the opposite side of the molecule. Each anticodon on tRNA matches up with a codon on the mRNA. In this way, amino acids are assembled in the correct order dictated by the mRNA code. The ability of tRNA to match codons with appropriate amino acids is codon recognition. Good codon recognition is essential to the correct assembly of polypeptides, which, in turn, leads to the production of the right proteins.

Nucleotide Examples, Function, Bonds & Molecular Structure | What is a Nucleotide in DNA?

The Role of Ribosomes and Peptide Bonds in Genetic Translation