Belle has a son named Judah, who is one-and-a-half years old. She loves watching him grow and change every day. When he was first born, he used to just stare at her blankly, but now he interacts with her in ways that make it clear that he sort of understands what's going on around him.

Human development is the process of growth and change that people go through during their lifetimes. There are many types of development. As Judah grows taller, he is physically developing. As he becomes able to stand and walk, he is demonstrating motor development. When Judah learns how to deal with feeling scared or lonely, he's developing emotionally. And when he learns how to make Belle laugh by making funny faces, he's going through social development.

One of the types of development that changes rapidly in the first two years of life is cognitive development, or growth and change in knowledge and thought processes. For example, a newborn baby doesn't understand what numbers are, but by age two, many children can count to five or even 10. Their knowledge and understanding of things has grown. Let's look closer at cognitive development in the first two years of life. 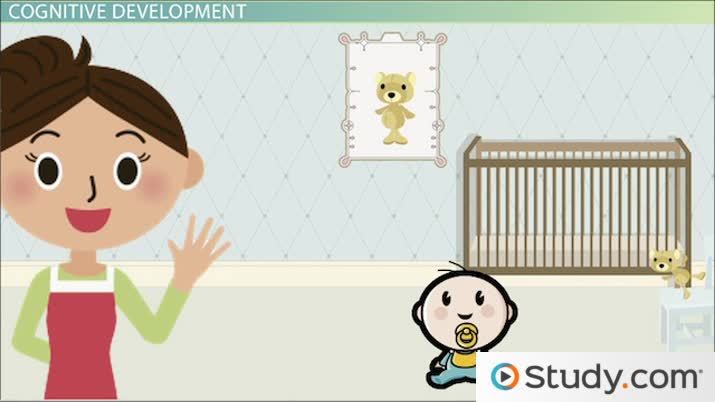 Coming up next: Infant Creativity and Intelligence

1. Reflexes: At the very beginning of the baby's life, he understands the environment only through reflexes, like sucking. Belle can remember how during the first month of his life Judah only stared up at her blankly. He had certain reflexes, like sucking when she put a bottle in his mouth, blinking when a light shone in his eyes, or grasping her finger when she put it in his palm. But Judah didn't really seem to understand anything about the world around him.

2. Primary circular reactions: When the baby is between one and four months old, he will discover new sensations and will begin to repeat the ones that he finds pleasurable. This stage is called 'circular' because the child is repeating the behavior, like going around in a circle. For example, one day Judah had his thumb near his mouth and began to suck on it. That first time, it was purely a reflex; he did not plan on sucking his thumb. But he found that he liked it, so he started doing it more often.

3. Secondary circular reactions: At between four and eight months old, the baby begins a new circular pattern: he acts upon his environment and then repeats an action to get a reaction. For example, one day Judah threw his toy in the air. Belle laughed at that, and so Judah began throwing his toy in the air over and over, hoping to make his mother laugh each time.

4. Coordination of reactions: Sometime between eight and twelve months, the baby will begin to act intentionally to get a reaction and to demonstrate that they understand the functions of objects. Remember that Judah discovered that he would get a reaction if he threw his toy up in the air. The first time he did it, it wasn't to get a reaction; he accidentally discovered that throwing his toy gets a reaction. But now, Judah is starting to understand that certain things have specific functions and that his actions will get the objects to work. He figures out that if he shakes his rattle, it will make noise. He has learned that the rattle's function is to make noise and that if he shakes it, he can get it to work.

5. Tertiary circular reactions: When a baby is between a year and a year-and-a-half, he will start to work in a systematic way to get reactions. It's like a trial-and-error phase to see what happens when he does certain things. For example, Judah has started making different noises to get Belle's attention; he's exploring to see what works best: shouting, crying, cooing, and so on.

From staring blankly at his mother to pantomiming eating when he wants her to know that he's hungry, Judah has come a long way in the past year and a half! But perhaps the biggest cognitive gain during the sensorimotor stage is that of object permanence, or understanding that objects continue to exist even when they can't be seen. Judah loves playing peek-a-boo with Belle. She holds a blanket up in front of herself and then drops it and says, 'peek-a-boo!' Every time she does that, Judah laughs.

But when he was a baby and she would hide behind a blanket, Judah would start to cry. When he couldn't see his mother, he believes that she ceased to exist. If she left the room or he couldn't see her, he didn't understand that she was still alive somewhere, just out of his line of vision. Now, though, Judah understands that his mother is still his mom and is still alive and well, even when he can't see her. Peek-a-boo is a fun game, not a scary one, because he knows that, even if Belle is hiding, she's still there.

Upon finishing this lesson, you might be prepared to: