Vericia has a masters in criminal justice.

Theories are a good starting point for understanding criminal behavior because they are backed up and supported by scientific research that can prove or disprove certain explanations of criminal behavior. They also provide us with a good knowledge base for such things as best practices in working with at-risk populations, rehabilitative programs, therapy, and even the passage of laws. So now that you have a basic understanding of what theories are, let's delve into a certain kind of theory and talk more about cognitive theories of criminal behavior 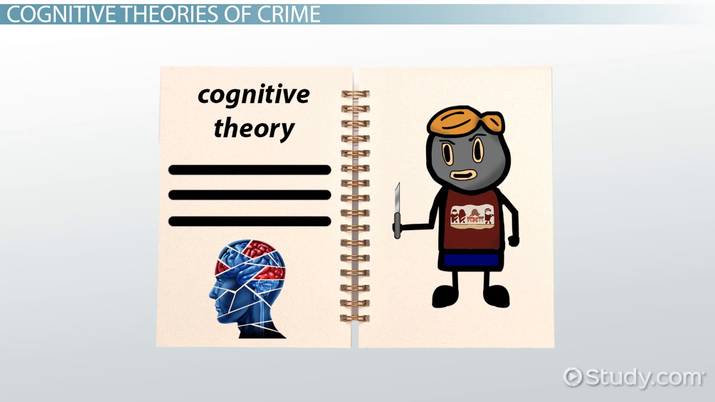 Coming up next: What Is General Deterrence? - Definition, Theory & Examples

In our desperation to understand why people commit crimes in the first place, psychologists and sociologists often study, analyze, and develop explanations of why these behaviors exist. So please remember that the cognitive theory is one of many psychological theories of criminal behavior. Cognitive theories of crime explain criminal behavior as a defect in moral thinking, thought processes, and mental development. Cognitive theories also help us to understand how an individual's personality and intelligence level are linked to delinquency. These theories are pretty broad but mainly hone in on the factors I've just outlined.

Cognitive theories focus on how we perceive the world around us, how we think, and the factors that influence our mental development (family upbringing, parental modeling, personality, intelligence). These theories help to explain how we develop morally in our thought process.

Here's a great example, a young male child who was raised in a home where his mother was verbally and physically abused by his father is likely to have a skewed idea of what a healthy relationship is. He's more likely to be an abusive partner himself. His perception of women and relationships are likely to be negatively impacted and shaped by his upbringing and the poor parental modeling received from the male figure in the household. Of course, the same young boy can grow up to be the total opposite of his father in his personal relationships as well: nothing is 100%.

So, do personality and intelligence really have anything to do with delinquent behavior? To answer this question, we need to pick apart each trait; let's start with personality. When you think of the word personality, what comes to mind? Is it the way a person behaves? Or maybe their attitude? Well, it's actually a little of both. Personality can be defined as those individual traits that make up one's character, attitude, and distinctive behaviors.

Our personalities are, in large part, shaped by our thoughts and how we perceive ourselves and the world around us. But, they're also shaped by things like parental guidance and modeling. For example, a person who is confident, friendly, makes friends easily, and initiates conversations with people she doesn't know, is more than likely a person who has had lots of positive experiences with others, including within her own household as a child.

Our thoughts and perceptions of ourselves, as well as those around us, can dictate the traits that make up our personalities. And it is our personalities that affect the way we behave and treat others. Now do you see the connection? There have been plenty of studies and research to support the belief that most criminals seem to share some of the same anti-social personality traits such as constant lying, self-involvement or arrogance, lack of empathy for others, and frequently blaming others for their behaviors.

Now let's move on to the intelligence link. According to some studies, there is a link between low IQ and delinquency. This could be refuted, depending on who you speak to and which studies you read. Between the years of 1928 and 1929, psychiatric tests measuring intelligence were given to 1,690 offenders living in Wisconsin jails and prisons. The finding was that 50.51% of offenders were of normal intelligence, while the remaining 50 percent were of lower intelligence.

When doing the research, you'll find that many studies base intelligence on factors like one time offender vs. repeat offenders and intelligence based on the type of crime committed. Another defect in most of these studies is that they almost always focus on offenders who've committed street crimes, neglecting white collar criminals who are generally well-educated professionals.

To wrap it all up, cognitive theories of criminal behavior seek to explain crime causation by focusing on an individual's thought processes, as they relate to people, values, and the world around them. Cognitive theories are diverse but tend to focus more on how our thoughts influence our personality and how our personality influences our actions. Given the fact it is a broad theory type, it provides a more well-rounded view of criminality. Though cognitive theories focus more on internal contributing factors, they also believe external factors play a role in criminal behavior, which is why this theory continues to be one of the most popular among social service and medical professionals today.

The Social Learning Theory of Crime

What Is a Polygraph Test? - History, Reliability & Accuracy