Artists in the early 20th century popularized techniques of combining various objects and materials through collage and assemblage instead of painting. Learn these techniques' relationship to cubism and political movements through examples of famous artists. Updated: 11/09/2021
Create an account

You may be wondering why collage deserves a place in the study of fine art. After all, how could a craft with its own devoted hobby aisle deserve any respectable reputation in the art world?

It's true that craft collaging and scrapbooking were popular hobbies long before artists even considered the intellectual or philosophical aspects of these practices. That all changed in the beginning of the 20th century when politically motivated and culturally engaged artists took up collage and assemblage as alternatives to painting.

Collaging refers to the construction of a work of art out of paper items, such as photographs, newspaper, ribbon, magazines, books, etc. It differs from assemblage, which combines objects usually not made of paper, found objects like insect wings, coins, or utensils.

Before the availability of pre-packaged kits in the designated craft store aisle, innovative artists like Marcel Duchamp and Pablo Picasso took up collage as a way to express themselves. They discovered that by assembling together found objects, or materials from a recognizable origin reworked in a composition but remaining identifiable, from disparate origins provided them with a mode to critique their contemporary situation. 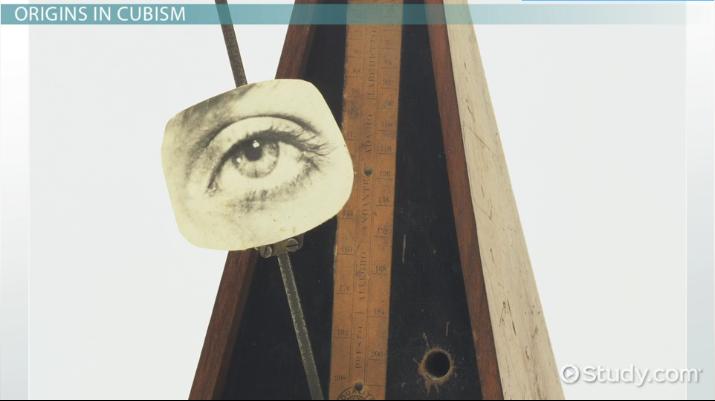 Coming up next: The Social & Artistic Nature of the Harlem Renaissance

Pablo Picasso, a Spanish painter, and Georges Braque, a French artist, were colleagues who, together, made a huge impact on the art scene in the first few decades of the 20th century. Working in Paris, they originated a revolution in the art world through their innovative style that became known as Cubism, an abstract style of art that rejected the representational depiction of real objects toward an emphasis on geometric form and emotive color.

In the same way that these artists rejected the representation of real objects in painting, they latched onto collage as a form that allowed them to bring to light how material objects were both commercial and manufactured products.

The collage offered a medium in which to critique the materialism of commercially produced goods and defamiliarize the objects by presenting them in a new combination (in an art frame), in a new setting (in an art gallery).

The artwork of Picasso and Braque both feature the same kinds of objects (art instruments) and similar color palette (muted tones and browns). As the Cubists explored the techniques of collage and assemblage, you can see how their subject matter stayed the same while their methods changed. By using found objects and carving wood, combining spoons and metal mesh with upholstery fabric, they pushed the boundaries of what was acceptably considered art.

Dada was an avant-garde art movement that originated in Switzerland around 1916 in reaction to the First World War. Dada is just gibberish, a nonsense word chosen as a critique of the irrationality of modern civilization. Dada artists used absurdity as an anti-aesthetic, rejecting the notion of the practiced artist. Assemblage as a medium is motivated by political leanings, reflected in the spirit of the times. Dada artists embraced the art of assemblage for its ability to defamiliarize everyday objects.

An artistic technique that arose at around the same time as Dada, defamiliarization was a term coined by Russian art theorist Viktor Shklovsky to identify the method of pulling a familiar object or idea out of context to raise awareness of its mundanity. For example, the Dada artist Meret Oppenheim lined a teacup with animal fur using juxtaposition to make both objects strange. Juxtaposition and defamiliarization were already a strategy in Dada painting, but with assemblage, the tactic rose to new levels of sophistication.

The tactic of defamiliarization reached a pinnacle with Marcel Duchamp's creation of the readymade, which refers to the presentation of an everyday object placed out of context on a pedestal as a unique work of art. The most famous example of a readymade can be found in Duchamp's Fountain, a urinal removed from its familiar context of the bathroom stall and put on display in the privileged environment of the sanitized art gallery. Duchamp brought new meaning to the use of found objects. Unlike assemblage, which requires a degree of technique and skill, the readymade was simply an everyday object relocated and made strange by placing it in a new context.

While the art forms of collage and assemblage predate the avant-garde movements of Cubism and Dada, early 20th century artists innovated the practices of combining found objects and collecting strips of magazine and newspaper. Cubist and Dada artists used collage and assemblage to draw attention to the dimensions of canvas, much like abstract painting emphasized flatness.

Picasso, Braque, and other Cubist artists pioneered these forms, pushing the boundaries of what could be considered as high art. They developed the style of Cubism as a rejection of representational art, moving away from the depiction of recognizable objects in paint on canvases to the combination of found objects in 3-dimensional space.

Dada artists juxtaposed everyday objects to make them strange, drawing attention to the absurdity of life in an overly rationalized 20th-century civilization.

Duchamp shocked the art world with his readymades, found objects placed on display in a method of defamiliarization, showing how a seemingly familiar thing could be perceived from an outside perspective, made strange. His Fountain turned a filthy urinal into a work of art.

After learning everything possible from this lesson, find out how prepared you are to:

What is a Self-Portrait? - Definition, Artists & Examples