Collectivism is a political, economic, or cultural system that privileges the needs of groups and communities over individuals. See some examples of collectivism, and test your understanding with a brief quiz.
Create an account

Collectivism refers to a society, a culture, or an economy that values groups over individual interests. Collectivism is often understood in contrast to individualism, which privileges the individual interests over the group. Community is not valued as highly in very individualistic societies. Collectivism, on the other hand, is a stance that argues for the importance of group identities and allegiance over individual values. It stresses joint decision-making and group goals. In this way of thinking, your particular needs and interests are not any more important than the needs or interests of anyone else.

Let's talk about some different types of collectivist scenarios. 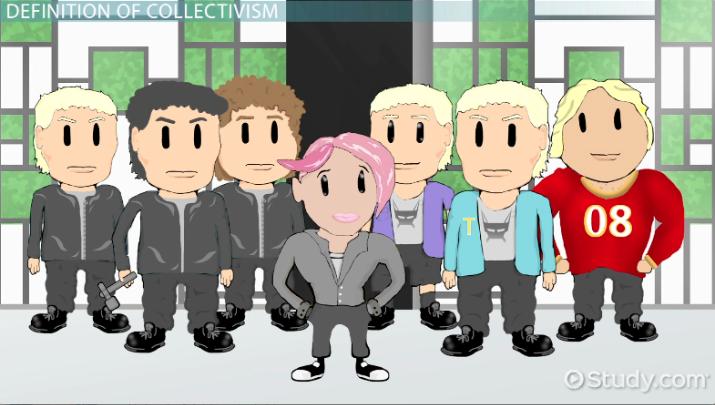 If we're talking about the economy, collectivism refers to a system in which the distribution of goods and services is controlled by the government or the state, or by groups of individuals. In this kind of economic system, the means of production (the materials, buildings, and machines used to make things) are not owned by private individuals. This is the opposite of capitalism, where enterprise is owned by private individuals.

A socialist economy is an example of an economic system that is collectivist in nature. The means of production are owned by the state or collectively by workers, and the point of producing goods is not necessarily to make a profit but to produce for the benefit of society. Socialist economic systems seek to make sure that the needs of people come before the needs of profit, making it different from capitalism's more individualistic focus. For example, joint ownership of farms was a common practice in the former Soviet Union. Farmers would own land collectively and benefit from pooling their labor and resources. In more extreme examples of collectivism, private property is eliminated entirely.

In politics, collectivism is found in a system such as a representative democracy. In this system, citizens vote for their leader, and after the votes are counted, you are expected to accept this leader, even if it wasn't the leader you voted for. Because here we're privileging the collective, or the majority of voters, this collective voice matters more than the voice of one individual. In this way, more individualistic cultures like the U.S. do have some collectivist tendencies.

Collectivism can also exist independently from political and economic systems. A good example of this is culture. Collectivism in cultural terms refers to a culture that privileges family and community over individuals. For example, children in collectivist societies are likely to take care of elderly parents if they fall ill and will change their own plans in the event of a family emergency.

Collectivist institutions are things like your local police or fire department. Each member of a society is expected to contribute some of their own money, in the form of taxes, to maintain these institutions for the good of the community. That way, if there's a fire in your home, for example, the fire department, which you help pay for through your taxes, will come and put out the fire, which also ensures that your neighbors won't burn down either.

Collectivism refers to a political, economic, or cultural system that values groups or communities over individuals. Collectivism is often understood in contrast to individualism, which privileges the individual interests over the group. In a collectivist political system, the needs of the majority are recognized as more important than those of the individual. Examples include a socialist economy, in which the means of production are owned by the state or collectively by workers, and the point of producing goods is not necessarily to make a profit but to produce for the benefit of society. The means of production are the materials, buildings, and machines used to make things. This is contrast to a capitalist system, in which enterprise is owned by private individuals.

Another example of political collectivism is representative democracy, which is when citizens vote for their leader and are expected to accept the voted-in leader, even if it wasn't the leader they voted for. Collectivist institutions are things that include the police and fire departments. Collectivism in cultural terms refers to a culture that privileges family and community over individuals. Collectivist cultures value family and community over the individual. Everyone is expected to care about the greater good. This is prevalent in countries like India, Japan, and China.

What Is Professionalism in Communication? - Definition & Skills

The Mind-Body Problem in Philosophy