You may or may not be aware of this, but in America, we generally don't consider ourselves 'British'. Nope, we call ourselves 'Americans.' Know why that is?

While we were part of the British Empire for quite some time, in 1776, the 13 colonies joined together and declared independence. I'm guessing you've heard this story. What came next was the Revolutionary War, the American fight for independence from Britain that lasted until 1783. When it was all said and done, the 13 colonies were now states, united under one national government.

But how did that happen? How'd we get from 13 separate colonies to 13 united colonies? Well, as the colonies prepared for independence, they realized that they had something very important to do first. They needed to form a government, and the governments they created throughout the Revolutionary War defined the new nation that emerged. 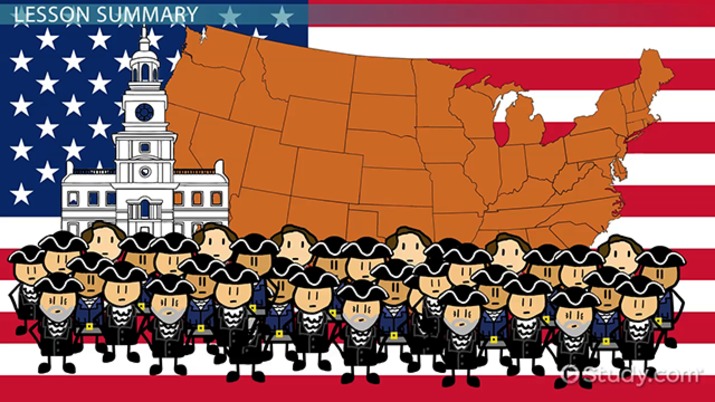 Coming up next: Influential Documents for the U.S. Constitution

The first real attempt by the American colonists to create their own government was the First Continental Congress, a convention of delegates from the colonies that met in 1774. There were 56 delegates who showed up at the Congress' headquarters in Philadelphia, and this was a pretty unique event. Up until this point, the 13 colonies really were 13 different colonies, so this was the first time that they really came together as one unit. Georgia was the only colony that did not participate, mostly because it needed British troops to help it fight Native-American insurgencies in the south.

The point of the First Continental Congress was to organize a trade boycott against Britain in protest of new taxes. They thought this protest would be stronger if they worked together. It was at this first convention that the first real debates about independence emerged, although the delegates were pretty split on the idea. After a little more than a month, the First Continental Congress adjourned, agreeing to meet up again if the Crown didn't address their concerns, and the precedent of colonial government was set.

So, as you can probably guess, King George III didn't take the demands of the colonists very seriously. Actually, he got pretty mad at them. So in 1775, the delegates came back together in Philadelphia and formed the Second Continental Congress.

However, this convention had very different goals. By this point, shots had already been fired between British troops and local militia, so the Revolutionary War was getting underway. But, somebody needed to organize troops and resources. After all, local militia weren't going to defeat the British Empire unless they were organized. What they needed was a government.

From 1775 to 1781, the Second Continental Congress served as the government of the rebelling colonies. One of its first actions in 1775 was to formally organize all of these militias into a single Continental Army. It appointed Virginian Congressman George Washington as the commanding general. Then, in 1776, the Congress unanimously passed the Declaration of Independence, formally severing the colonies from the British Empire.

Throughout the Revolutionary War, the Continental Congress acted as the government of the former colonies, now states, even though it didn't actually have any legal authority. It did things like create ambassadors to deal with foreign nations, made treaties and borrowed loans from friendlier powers like France, printed money, and controlled the army. But like I said, it didn't really have any official authority, so it couldn't force the states to pay taxes. It couldn't actually force the states to do anything, so the amount of resources that each state voluntarily sent the Congress was inconsistent at best. But, it worked well enough that the Continental Army was able to push through the war.

Congress of the Confederation

The limited power of the Second Continental Congress made it obvious that if the former colonies were going to become a new nation, they needed a more official government. So, the delegates drafted a legal document to formally create a nation and a government (in essence, a constitution) called the Articles of Confederation.

This document officially turned the colonies into a confederation of states under a single government: the Congress of the Confederation. The articles were formally ratified by the states in 1781, and from 1781 to 1789 this Congress was the national government. This Congress was not only responsible for finishing the Revolutionary War, but also for setting up a more permanent government, which was no easy feat. This meant creating departments of finance, war, foreign affairs, etc.

We all know that we have a federal government, and a constitution, and that we live in the United States. But, it wasn't always this way.

Right before the Revolutionary War began, the colonists formed the First Continental Congress, a delegation of representatives from each colony to organize protests against the British Crown. As war broke out in the colonies, the delegates met again and formed the Second Continental Congress in 1775 to organize a single army to fight the British and formally declare independence. This Congress was the first government over all 13 former colonies.

However, it didn't have any real authority and was replaced in 1781 when the delegates wrote the Articles of Confederation. This made the colonies into a confederation of states under a single government, the Congress of the Confederation. This Congress had more power than the last and not only won the war but also started setting up a permanent government. Finally, in 1787, the United States Constitution created the United States of America and a federal government to oversee it. But thanks to those three congresses, we in America aren't calling ourselves British anymore.

Revolutionary War was the American fight for independence from Britain that lasted until 1783.

First Continental Congress was the convention of delegates from the colonies that met in 1774.

Declaration of Independence formally severed the colonies from the British Empire.

Articles of Confederation is a legal document to formally create a nation and a government.

Explore the lesson on Revolutionary War-era colonial governments, then:

The U.S. & France in the Revolutionary War: Lesson for Kids

The Spread of Democratic Ideals During the Revolutionary War

Loyalists vs. Patriots in the American Revolution