In ''Things Fall Apart'' by Chinua Achebe, the issue of colonialism is front and center for us to examine. In this lesson, we'll look at whether colonialism had a positive or negative impact on the Igbo culture and the novel's protagonist, Okonkwo.
Create an account

It Takes a Toll

In Things Fall Apart by Chinua Achebe, we are compelled to consider how the title is a reflection of the effect of colonialism on the novel's protagonist, Okonkwo. He fights a losing battle to prevent missionaries from taking control of his community. He struggles throughout the novel to keep from becoming lazy like his father and works frantically to keep the culture of his tribe intact. 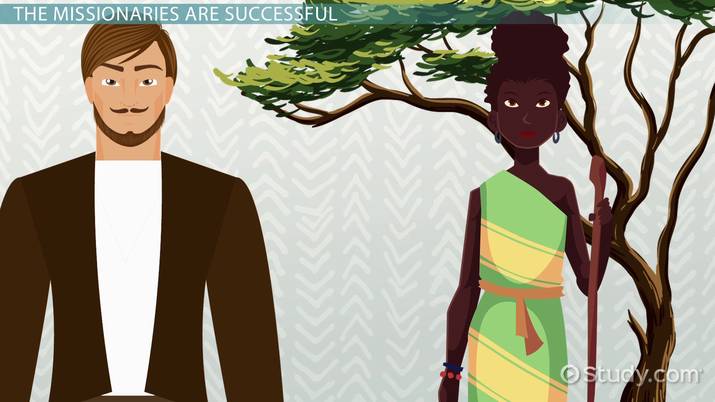 Coming up next: The Locusts in Things Fall Apart

In order for cultural change to take place, the colonizers must begin by introducing their religion. They attempt to allay fears by coming on a platform of peace, but their ultimate goal is to fundamentally change the beliefs of the tribe.

While the quote is a symbolic representation, it accurately reflects the arrival of the intruders who have every intention to take over the Igbo by introducing monotheistic religion and undermining the things that had previously been valued. We see Okonkwo and his son torn apart because Okonkwo cannot accept that his son has forsaken his tribe for Christianity. The tribe is in trouble, and Okonkwo knows there is nothing he can do to stop the death of all he holds dear, as is reflected in the following passage:

The white man is very clever. He came quietly and peaceably with his religion. We were amused at his foolishness and allowed him to stay. Now he has won our brothers, and our clan can no longer act like one. He has put a knife on the things that held us together and we have fallen apart.

The Missionaries Are Successful

The missionaries gain a foothold in Umofia, and it doesn't take long before they have converted most of the tribe to Christianity. This results in the customs and practices of the Igbo tribe being thrown away, and this causes Okonkwo great distress. The missionaries essentially force the tribe to convert to Christianity, and do so by telling them that their beliefs were based on untruths.

While Okonkwo is in exile, he is told of the annihilation of the nearby Abame by the white men. A white man had come to the village on a bicycle or 'iron horse' as the villagers called it. People were afraid, and the elders consulted the Oracle. They were told the white man would destroy them and that more were heading their way. They killed the white man and placed the bicycle on their sacred tree.

Soon, more white men came to the village. When they saw the bicycle on the tree they left, but soon many more came into the village when the people were gathered at the market, and the white men killed them all.

We have heard stories about white men who made the powerful guns and the strong drinks and took slaves away across the seas, but no one thought the stories were true.

The missionaries are successful in stripping the Igbo of its customs, rituals, and beliefs. While it is true that the missionaries' goal was to bring religion to the clan, they also sought to bring what they saw as civilization. They helped take away inhumane practices such as ritualized sacrifices and violence. It brought an elevation in the economic structure, but more importantly it also brought the opportunity for more knowledge.

In the end, the white perspective ended up taking over the Igbo worldview and cultural perspective. In some ways, this might be seen as a good thing, especially regarding topics that were seen as taboo in the old society. Before the whites came to the village, children born as twins or those with diseases were sent to their death in the evil forest. Once the Christian attitudes were instilled, Igbo practices changed and children were saved.

One Man Against Many

Okonwko feels strongly that the white man must be fought, no matter the cost. He is disturbed because they don't speak his language, they don't follow his customs, and they don't see the world as he does. He is determined to fight them in any way he can. Unfortunately, he is over-matched and alone in his fight.

There is a moment when it looks like Umofia will take a stand against what is happening, but messengers try to break it up.

The white man whose power you know too well has ordered this meeting to stop.

Okonwko is so disgusted and angry that rather than follow their orders, he draws his machete and slices their heads off. Okonwko knew that the others would not go to war against the white intruders because they let the other messengers go. His distress over this realization is palpable.

For Okonwko, this was the straw that broke the camel's back. He could no longer stand by and watch as the intruders decimated the tribe he loved, people he had spent his life with, and his way of life. He knew that he could no longer live alongside the white conquerors with their different customs, different religion, and different attitudes that had taken everything from him.

Obierika found him after he had hanged himself. He was saddened by what Okonwko had been forced to do. He tells the district commissioner exactly how he feels:

That man was one of the greatest men in Umuofia. You drove him to kill himself; and now he will be buried like a dog…

In Things Fall Apart by Chinua Achebe, we are given an opportunity to witness the effects of colonialism on a tribe of indigenous people. When the white missionaries first come to the village, they are kind, loving, and peaceful. However, we soon realize that their goal is to decimate the cultural beliefs and customs of the tribe and replace them with the ways of the white world. Okonkwo is devastated by their intentions and does whatever he can to keep them from taking over. In the end we, like Okonkwo, realize that it is a losing battle.

The Role of Women in Things Fall Apart

Okonkwo as a Tragic Hero in Things Fall Apart

The Village of Umuofia in Things Fall Apart