What gives color to objects? How do light waves interact with materials to produce red and green or white and black? In this lesson, learn how white light is composed of all colors and how absorption and reflection influence our color perception. Updated: 12/13/2019
Create an account

What makes a plant green? What gives a male cardinal his bright red feathers? Why is an orange, well, orange? All of the colors in the visible light spectrum are characterized by different frequencies. Green-colored light lives between 540 and 610 Terahertz. For red, the frequencies are a bit lower. For violet, they are higher. But what determines the color of an object? How do the frequencies get divided out between red, green, and violet objects? To answer these questions, we first need to look into the mysteries of white light. 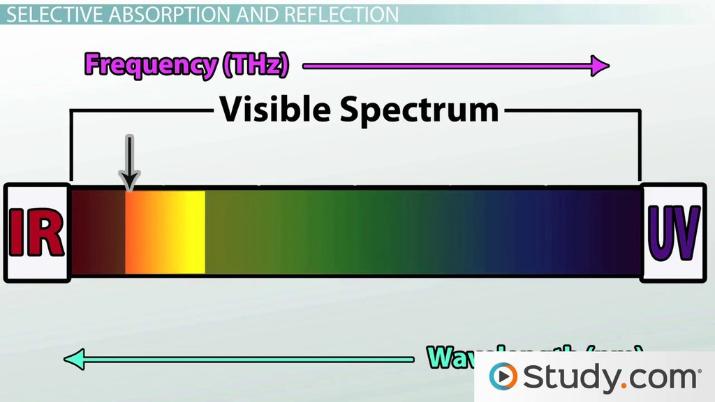 White Light and the Color Spectrum

If you pass a beam of white light through a prism, you will see the light split into the colors of the rainbow. There's red, orange, yellow, green, blue, and violet all spread out. You can also see a rainbow when sunlight passes through a crystal decoration or even the peephole in your front door. Sunlight and other white lights are actually made of many different frequencies. The sun emits infrared and ultraviolet waves in addition to the full spectrum of visible light. We don't see the infrared and UV waves, but we do see the full range of visible color, all bundled together in the form of white light. White light is the combination of many different frequencies of visible light from all parts of the visible spectrum. The only way we can see these frequencies as separate colors is to separate them into a rainbow.

So if sunlight is white light, and sunlight reflects off of objects like plants and birds and oranges, then why don't we see those objects as white? It turns out that the different color frequencies are absorbed and reflected differently in every different object. Let's learn more about selective absorption and how it relates to color.

Let's say you've got a nice ripe orange in your hand. You walk outside, and the sunlight beams down on the orange from above. The sunlight is white light, so it contains all the different frequencies in the visible light spectrum. Many different waves of light beam down on the orange, each wave a different frequency. When a light wave strikes any object, it can do one of three things: it can be transmitted, it can be absorbed, or it can be reflected. We know that none of the light waves are transmitted through the orange. If they were, then the orange would appear transparent. Since we can't see through oranges, that means they are opaque, and that means all the light must be reflected or absorbed.

So what is different about the orange light? Instead of being absorbed into the orange like the other colors, orange light is reflected by the skin of the fruit. In reality there are a range of frequencies for the color orange. Some waves are more reddish-orange and some are more yellowish. But all those frequencies are reflected together, giving the orange the appearance of being orange. The appearance of color is due to the selective absorption of light waves. Orange wasn't the only color to be beamed down on the fruit. But it WAS the only color to be reflected. Selective absorption describes the tendency of an object to absorb some frequencies of light more than others. An object that appears a certain color reflects the light frequency that corresponds to that color, and it absorbs all the other frequencies in the visible light spectrum. An orange absorbs all of the frequencies but orange. A banana absorbs all of the frequencies except for yellow.

Selective absorption occurs in just about everything that has color. It happens because of the specific properties of the molecules that make up objects. The molecules in red paint are slightly different from the molecules in blue paint. The molecules in red feathers are different from the molecules in blue feathers. In fact, most living things use special chemicals called pigments to make their bodies appear a certain color. A pigment is a chemical that alters the color of a light wave by selectively absorbing one or more light frequencies. The feathers of a male cardinal are made red by special organic pigments called carotenoids. Birds get carotenoids from the plant materials they eat. They can make red, yellow, or orange colors in their feathers this way. Another pigment they use is melanin, the same pigment that colors human skin. Melanin is used to make the blacks, browns, and tans in the feathers of birds and the hair of mammals. Structures that are totally black absorb all of the frequencies of light. In the case of white structures, there ARE no pigments. So white feathers and white hair appear that way because ALL frequencies of white light are reflected from their surfaces.

One very important biological pigment is the plant pigment chlorophyll. Chlorophyll is what gives plants their green color. More importantly, it's what allows them to absorb the sun's energy and make food through the process of photosynthesis. Chlorophyll is found mostly in the leaves and stems of plants. It absorbs a huge amount of energy from white sunlight. It absorbs the waves in the red frequencies, and the blue, and the violet, orange, and yellow frequencies. But it doesn't do a great job of absorbing light in the green frequencies. So the green frequencies are reflected instead! And that's why plants look green.

The common theme here is that color is not something that exists in objects. We perceive things to be a certain color because of the way our eyes sense the various frequencies of light reflected off of them. Objects that appear red do not contain the color red. They only contain the molecules that affect the visible light waves so that only red is reflected. Therefore, color is the perception of a visible light wave's frequency.

White light is a combination of all the frequencies of visible light. When white light strikes an object, each individual frequency of light is transmitted, reflected, or absorbed, depending on the properties of the surface molecules. If all frequencies are absorbed by the object, then it appears black. If all frequencies are reflected, then it appears white. Selective absorption describes how some frequencies of light are absorbed while others are reflected. This results in the appearance of color. Pigments are natural or man-made chemicals that give color to objects through selective absorption. While we often describe objects as 'being' a certain color, the truth is that color is only our perception of the light frequencies reflected off of objects.

After watching this lesson, you should be ready to:

The Speed of Light: Distance & Light-Years

Law of Reflection Lesson for Kids

How Does Light Travel? - Lesson for Kids

Galileo, the Telescope & the Church