Comets are fascinating objects found in outer space! In this lesson, explore how comets are created and how they travel. Find out what people thought about comets long ago, and learn about famous comets. Updated: 02/07/2020
Create an account

What Is a Comet?

A comet is a big ball of particles, including rocks, ice and dust. This big ball containing most of the material is called a nucleus. Comets are found traveling throughout space. When they come close to the sun, the particles in the comet heat up. This makes the comet appear bright and almost as if it has a tail. Comets can be seen from Earth, some with powerful telescopes and some without any visual assistance at all. 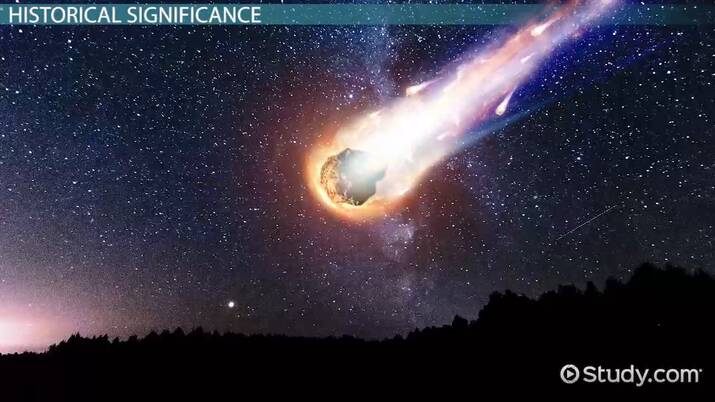 Coming up next: Facts About Saturn: Lesson for Kids

How Do Comets Travel?

Comets travel in a path called an orbit. This means that they travel around the sun. Unlike the orbit of planets, a comet's orbit is not always perfectly round. They are light and therefore can be tossed around thanks to the pull of gravity of planets they may be close to. Some comets have a short orbit, where they travel completely around the sun in a short amount of time. Other comets take hundreds of years to complete their orbit. Interestingly, the tail of a comet is always pointed away from the sun throughout its orbit.

Comets have been viewed throughout history. Many famous paintings and drawings depict people viewing comets traveling close to the earth. Now we have scientific advances that help us understand what comets are and what they're made of. But imagine seeing an unfamiliar object in the sky and not having any idea what it was or if it was heading straight toward the earth! Many people believed that comets signaled danger or doom. These balls of ice and rock created fear and terror in many over the years!

Halley's Comet is perhaps the most famous comet currently identified. It was named after Sir Edmund Halley. It can be seen on Earth approximately every 75 years. It was last visible in 1986, so ask your parents if they remember hearing about this famous comet. Scientists expect it to be seen again in the year 2061. Comet Hyakutake was discovered in 1996 by a Japanese astronomer who was only using binoculars to look into the night sky. It's likely that this comet had not come close to Earth for many thousands of years, and it will most likely not travel close to the earth again for many thousands of years to come.

Okay, let's review what we've learned. We learned about comets in this lesson, which are big balls of particles, including rocks, ice, and dust that travel through space and that travel around the sun (the act of traveling around the sun being called orbit). We also learned that comets have a nucleus, which is a big ball of ice, rock, and dust, and the tail, which always points away from the sun and is visible as the comet heats up. Historically, people were very afraid of comets until scientists learned more about them. Halley's Comet and Comet Hyakutake are two very famous comets.