The Spanish Committee on Public Accounts functions much like the Internal Revenue Service in the United States. Explore this important oversight organization and discover its history, functions, and responsibilities in today's world. Updated: 10/25/2021
Create an account

In math class, the teacher probably told you time and time again to check your work. While you can often catch a few mistakes, sometimes it's better to let a friend or classmate check your work so that they may catch something you've missed. Well, in Spain, the Committee on Public Accounts is charged with checking the financial work of all companies, organizations, and people in Spain. Think of it like the Spanish IRS. In this lesson, we'll explore the Committee on Public Accounts, its history, and its functions today. 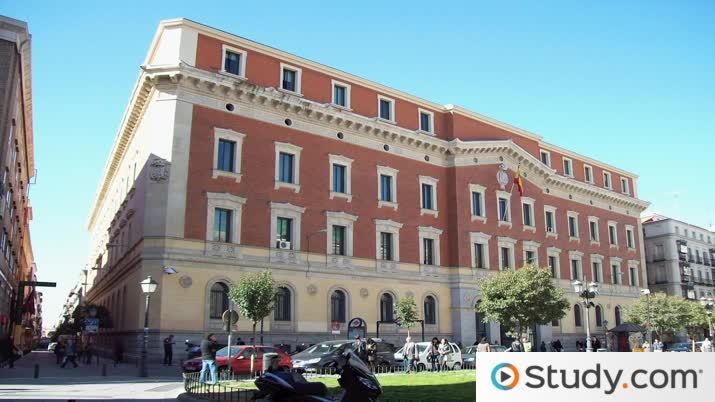 Coming up next: The Federal Republic of Germany: An Overview

Centralized financial watchdog organizations are a relatively recent phenomenon in most western countries, including Spain. It was not until the 19th century that something resembling today's Committee on Public Accounts was first formalized. The short-lived 1812 constitution created the accounting office, which was charged with scrutinizing all accounts containing or using public funds.

Though the government created by the 1812 constitution was soon overthrown, the central government's commitment to financial oversight sustained and later in the century, the Spanish government created the High Court of Auditors. This organization sustained in various forms, through the 19th and into the 20th century. It was often changed and manipulated according to the political regime in control of Spain at the time.

For example, during the short-lived republic of the 1930s, the Court of Auditors was an independent auditing organization, while during the dictatorship of General Francisco Franco, it was reformed to report directly to the head of state. The Committee on Public Accounts reached its current manifestation after Spain was declared a constitutional monarchy and a new constitution was written in 1978.

The Committee on Public Accounts is the supreme audit body of all economic activity in Spain's public sector. The Committee is entirely independent from Spain's executive and it reports directly to the Spanish Parliament, the Cortes. The Committee's most important function is ensuring that public funds are spent wisely and prudently by all government organizations and those organizations and companies with which the Spanish government has contracts.

This mandate extends into nearly all areas of public funding, from massive infrastructure projects to student loans. In addition, the Committee on Public Accounts is required to audit the finances of official political groups and parties in Spain. The Committee is charged with documenting all money the political groups handle, whether it's receiving campaign contributions, buying election advertisements, or paying its employees. Finally, the Committee is also charged with determining liability if it finds any accounting irregularities or finds evidence of a major crime, like embezzlement or misappropriation of public funding.

After all, businesses can be quite complicated; holding companies can own other holding companies who can be owned by even other companies or individuals who may not even be in the same country. When the committee finds an issue, it tracks down the culprit so the Spanish courts know who they should or shouldn't prosecute.

The Committee on Public Accounts is the supreme auditing body of all economic activity in Spain's public sector. It deals with all issues from things as small as government student loans to those as large as multimillion dollar contracts with big corporations. Today's Committee is entirely independent from Spain's executive and reports directly to the Spanish Parliament, the Cortes.

The Committee actively investigates all areas where public funding is spent and ensures that it is being spent wisely, appropriately, and within the parameters laid out in Spanish law. If irregularities or major crimes are discovered, the Committee is further charged with figuring out exactly who or what organization is at fault for the irregularities.

By working through this lesson, you might accomplish these goals: