When writing multiple choice questions, some educators make mistakes that can actually benefit the test-taker. Watch this lesson to find out about some common flaws that show up on multiple choice tests and how they can help you do well.
Create an account

Tyler is a behavioral theorist. He believes:

A) Psychologists should focus on people's feelings

B) Psychologists should focus on people's thoughts

If you've ever taken a multiple choice test, or test consisting of questions whose answers you choose from several options, you know that they can be very hard. But some questions, like the one we just looked at, can be figured out in a simple way. 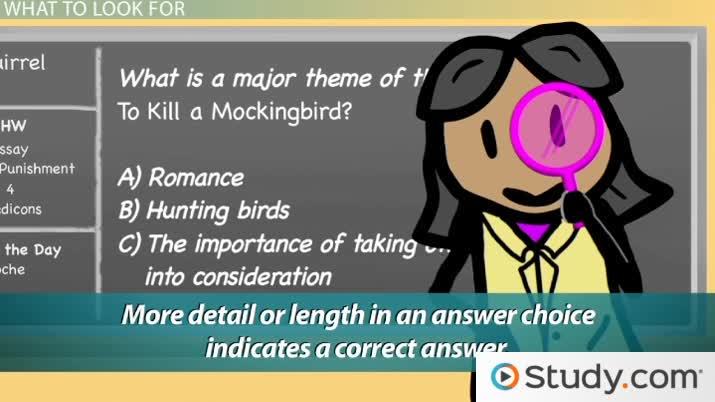 Coming up next: Flashcards - AP Psychology: History and Development of Modern Psychology

What to Look For

Gene has a hard time concentrating in school, and he fidgets and moves around a lot. Which psychological disorder might he have?

So, we know that there are certain mistakes test writers make that can benefit test-takers. But what are the common flaws that might show up on a multiple choice test?

Off-topic answer choices could be from a completely different content area, like having a math problem on an English test, or more likely they'll be from the same content area but a different segment of that content, like having Lincoln as a choice in a Revolutionary question. Both Lincoln and the American Revolution are part of American history, but they are from different parts of American history, and therefore, we can eliminate the answer choice about Lincoln.

Let's say that I ask what is a major theme of the book To Kill a Mockingbird. All of the answer choices are one or two words, like 'romance' or 'hunting birds.' But one answer is longer and more detailed, like 'the importance of taking others' viewpoints into consideration.' Even without reading the book, it's probably clear that the longer, more detailed answer is the correct one. Often, more detail or length in an answer choice indicates a correct answer.

We've already seen this one: remember Tyler, the behavioral theorist who believes that psychologists should study people's behaviors? By having two similar words (behavioral and behaviors) in the question and answer choice, it's like a big red, flashing light letting people know that this is the right answer.

A) Always the one with the higher interest rate

B) Always the one with the lower balance

C) It depends on several factors

Besides the flaws we've already looked out for, test writers also sometimes use qualifiers and absolutes, which can give a clue as to the right answer. A qualifier is a word that says that something is not universally true. It qualifies a statement and therefore is called a qualifier. Qualifiers are words like often, sometimes, perhaps, may, generally, some, seldom, usually, ordinarily, and others like them.

Absolutes are often wrong and qualifiers are often right in multiple choice tests. Look back at the question we asked about Annie's credit card balances. Can you see the absolutes? Both answer choices A and B have the absolute word 'always' in them. That's a big hint that the answer isn't right. After all, everyone is different, and there are usually exceptions to the rule.

Understanding the Center of Mass & Center of Gravity

What is a Curriculum Model?

The Importance of Assessment in Education