During middle or secondary years, it's common for teens to go through various social and emotional challenges. Explore the typical issues commonly faced during this time, including problems with peers, authority, and family, and how counselors can help teens with them. Updated: 09/29/2021
Create an account

When I look back on my school years, I remember middle school as being one of the hardest times emotionally. My parents had just gotten a divorce and my two best friends stopped being friends with me, leaving me feeling that I wasn't good enough. In hindsight, I wished I had talked with my school counselor about what I was going through. That is, after all, why she was there - to offer a listening ear and help me deal with challenging events.

There were students who talked frequently with our counselor. They received compassion, support and direction from her and enjoyed keeping her updated on events in their lives.

Middle and high school years are often tumultuous times for people. Problems like family situations, friend difficulties, academic trouble, and challenging dating scenarios are commonplace for teens. It is important for school counselors to have an idea of what teens typically go through. 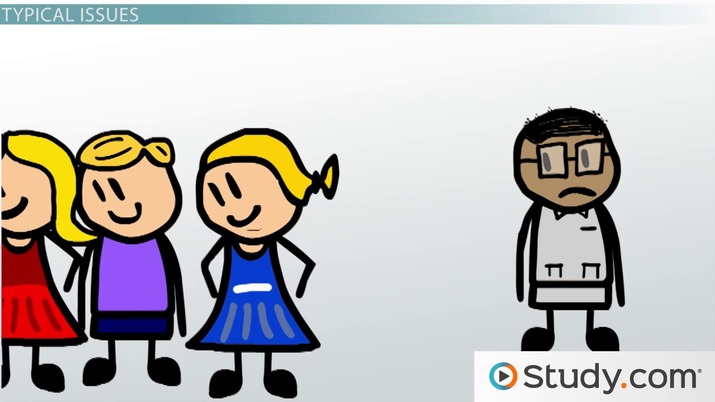 Try it now
Back
Coming up next: Counseling in Colleges and Universities

While there are countless types of problems that can arise during this time of life, here we have a list of some of the most common issues that teens deal with:

16-year-old Penny is often upset with her friend Sasha. Sometimes Sasha is rude to her; sometimes she seems to be flirting with Penny's boyfriend. Penny complains to her other friends frequently about what Sasha is doing. One of her friends tells Sasha everything she hears, which only causes Sasha to act more rudely towards Penny.

As many of us know, problems between peers are common in middle and high school. Like so many adolescents dealing with peer issues, Penny would benefit from having an outside figure to discuss situations with, help her seek positive treatment, and show her how to be kind to others when needed.

Seventh grader Ian tends to misbehave frequently in class. When his teachers try to punish him, they send him to the principal, but that doesn't seem to have much of an impact on him. Ian also does not listen to his parents when it is not convenient for him. He doesn't like being told what to do and believes that he should be in charge of his own life.

Like Rena, countless middle and high school students are unhappy, anxious, and distracted by challenges in their romantic relationships. If Rena had a counselor to see, she could sort through her situation with an objective party and be supported in doing what is healthy for her.

Tenth grader Simon is accustomed to being unpopular and picked on. Since middle school, he has been teased and never invited to weekend parties. Simon suffers from insecurity due to feeling socially inadequate. He refuses to ask a girl to a dance when the opportunities arise, he doesn't like starting conversations with his peers, and he keeps to himself for fear of being rejected. Simon could be helped by a counselor who will address his self-esteem and teach him social skills for making new friends.

Frank is a seventh grader who has been hoping for the past two years that his divorced parents would get back together. This year he became depressed when his mother announced that she was engaged to the man she had been dating. Frank is now fully grieving his parent's divorce, and he feels angry that another man will be 'taking his father's place.'

His mother knows about the strain her new marriage is putting on Frank, and it has caused her to feel depressed and anxious. This only makes Frank feel worse, now with a feeling of intense guilt for bringing on his mother's unhappiness. A counselor could help Frank to vent his feelings, look at his situation differently, and feel supported in the beginning of the marriage.

Adam is a senior who started drinking in eighth grade. He started doing drugs a couple years later. Adam spends his time with a group of students who party every weekend, and sometimes he doesn't come home until the next day. His behavior is causing him to fail classes and lack motivation for planning his future.

There are times when he notices he has a problem, but since he doesn't have anyone he feels comfortable sharing with, he usually just ignores his concerns. His home life is rocky because his father is abusive toward his mother, and it only increases his desire to drink and stay away. Adam would greatly benefit from having a counselor who can help him process his emotions and find practical guidance for becoming sober.

15-year-old Sarah has been severely depressed ever since her older sister was killed in a car accident the year before. Her sister was her best friend and the only family she felt close to after her parents divorced a few years prior. She often has trouble getting out of bed in the morning and she has lost interest in her friends and school activities. Sarah hasn't told anyone yet, but the truth is that she has been seriously considering ending her life.

A therapist would be very important for Sarah. He or she could look for suicidal signs, show Sarah she is not alone, and guide her in finding reasons to live. While these are common issues that teens go through, not all school counselors feel thoroughly prepared for severe cases or those that need consistent and long-term attention. In those cases, school counselors make referrals to certain counselors who work outside of the school.

Let's review. Middle and high school are known as pivotal times in a person's development and can be the starting point for potential life issues. There are several issues that are common to teens and with which school counselors should be familiar. These include Problems with Peers, Issues with Authority, Romantic Relationship Challenges, Social Inadequacy, Family Events, Alcohol and Drugs, and Suicide. When school counselors do not feel equipped to handle a specific situation due to its severity or duration, he or she will refer the student to an outside counselor.

Learning about the topics highlighted in this video could enhance your ability to: