In economics, pitfalls can lead to incorrect conclusions, which may be used to make poor economic decisions and policies. Learn about common logic pitfalls in economics, including causation vs. correlation, bias, loaded terminology, and other fallacies. Updated: 10/09/2021
Create an account

In a word, no. What you've just seen here is an example of a logical fallacy that economists often encounter. Again, when you look at the numbers, it makes sense. However, the reason that you see more people in swimsuits during times of increased ice cream sales has nothing to do with the ice cream. In fact, it has everything to do with the time of year people buy ice cream. In the summer, people spend time in swimsuits and people eat ice cream. They do both because the weather is hot. The hot weather causes increased ice cream consumption as well as more people to wear swimsuits.

As a result, we call this sort of relationship causation, because one action clearly causes the other. The relationship between ice cream sales and swimsuit sightings is, instead, a correlation, which means the compared items mirror each other but may not have anything to do with actual causality. 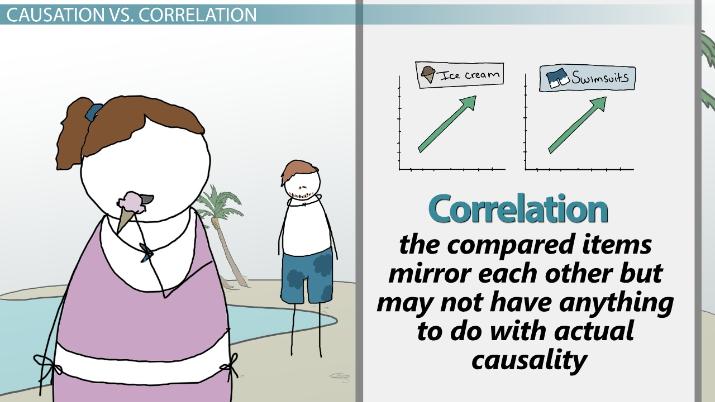 Okay, that was an easy one. However, economists still have to contend with other logical issues. Much of an economist's work depends on the accurate collection and portrayal of data. That said, it is not always that easy. People sometimes introduce bias, whether knowingly or unknowingly, that can change the data set. A bias occurs when the model in question is somehow shaped by what the economist wants to find.

For example, if I'm trying to model at what temperature water freezes and want to prove that water can't freeze, bias would be blatant if I kept the water boiling and just assumed that cold water doesn't freeze. It's a bit more subtle if I put it in the refrigerator and just assume that if water freezes, then it must freeze in the fridge.

But it's not always through overt design that biases are introduced. One of the biggest fallacies faced by economists is the use of loaded terminology, or words that carry a meaning beyond their mere definition. This is most often used by politicians to get an emotional response, especially when talking about things like 'our jobs,' 'our money,' or 'our healthcare,' but it can be abused by the innocent as well.

For example, if I asked if you had a comfortable lifestyle, you may consider that as shelter, a warm bed, and enough money after all your bills are paid to get pizza and beer on Friday night. However, what if your idea of comfortable involved a large mansion, a private pool, and a butler? Both use the same word but have a world of difference in meaning.

Other stumbling blocks exist as well. Closely related to the difference between causation and correlation is the idea of post hoc ergo propter hoc, a Latin phrase that roughly means since something came first, it caused something else afterwards.

As you might imagine, politicians love this one as well. Imagine a politician saying that his time in office brought new jobs to his district despite the fact that he spends all his time focusing on getting a TV deal for his crazy family, and you'll get post hoc ergo propter hoc.

I want to talk about one last fallacy, and that's the fallacy of composition. This idea states that if a part of something has one outcome, so, too, will the whole. For this one, the best example I could think of actually comes from high school chemistry class. Sodium, in its purest form, explodes when it hits water. Chlorine has been used for 100 years as a chemical weapon. Separately, you're not going to have a good day if you encounter either. When the two are combined to form table salt, chances are you've already eaten some today. According to the fallacy of composition, salt is dangerous.

Thankfully for fries everywhere, this is just another logical fallacy. In economics, this could pop up when someone assumes that their own economic behavior that has a positive outcome can be universalized so that if everyone does it, a positive outcome will still result. Without getting into the nitty-gritty of this, logically, that isn't always the case.

In this lesson, we examined numerous logical fallacies faced by economists. We started with causation and correlation and learned that just because something happens at the same time as something else doesn't mean that the two are related. Then we discussed bias and loaded terminology and how these could be used to drastically alter data. We also discussed post hoc ergo propter hoc, a fallacy used to disprove something causing something else just because it is older. Finally, we learned about the fallacy of composition and how just because part of something has a reaction doesn't mean that the whole will have the same outcome.

By completing this lesson and transcript, you could become better-prepared to:

What Is the Economic Man? - Concept, Assumptions & Constraints

The Fallacy of Composition in Economics: Definition & Examples

What is Relative Price? - Definition & Formula

Trade-Off Examples & Types | What is a Trade-Off Economics?

Shifts in the Production Possibilities Curve