Tawnya has a master's degree in early childhood education and teaches all subjects at an elementary school.

To understand literature, it may be helpful to compare and contrast characters, settings, and events found in the stories. Consider the Venn diagram in this lesson to review Louis Sachar's novel, ''Holes.'' Updated: 01/05/2022
Create an account

A Venn diagram is a graphic organizer (like the one you're looking at here) used to show similarities and differences.

Let's look at a novel by Louis Sachar called Holes to find examples of comparing and contrasting when you read. 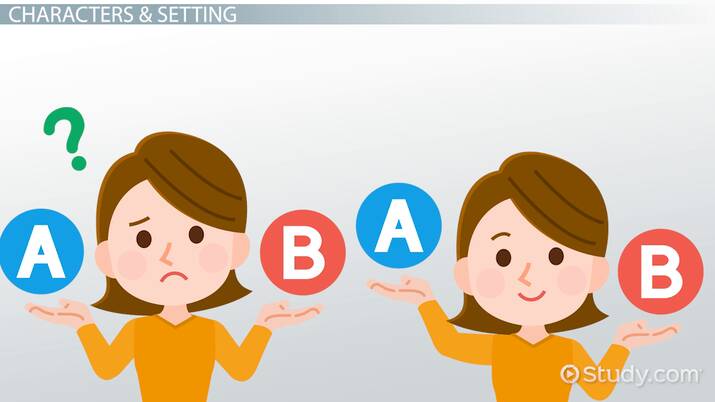 Coming up next: What is Structure in Writing and How Does it Affect Meaning?

Before we begin, let's check out a brief summary of Holes.

Stanley Yelnats believes he is under a curse, which started with his no-good-dirty-rotten-pig-stealing-great-great-grandfather. Stanley gets into trouble for something he claims he didn't do, and goes to a boy's detention center called Camp Green Lake to serve his punishment. The boys at the camp dig holes five feet wide by five feet deep every day to build character.

Soon, Stanley thinks there is more than just digging going on. He thinks the Warden is looking for something. But what? Stanley is determined to figure out what could be hidden in a dried up lake.

Now that you know a little bit about the story, let's dig in to compare and contrast the setting.

When Stanley first arrives at Camp Green Lake, it's kind of funny because there's no lake! It has been dried up for over 100 years. The land is barren and it's extremely hot outside. He sees a bunch of holes and close to the Warden's cabin there's a hammock hanging between the only two trees there.

As the story unfolds, we learn that over 100 years ago Camp Green Lake was different. The lake was filled with crystal clear, blue water. Surrounding the lake, you would see peach trees. It was a small town with only one school.

Time to dig in further and see how the two main characters are alike and different. Stanley and Zero are both campers at Camp Green Lake. After a while, they realize there's more than that they have in common! Check out this Venn diagram to compare and contrast these characters.

By looking at the inner part of the circles, you see what the boys have in common. The outer circles describe their character traits that are different. It's important to choose meaningful details. This way comparing and contrasting will help you get a deeper understanding of the story.

One of the final parts we can compare and contrast is events. Stanley's first hole:

Can you look through the lists and find anything similar? Different?

Hats off to excellent digging for details that compare and contrast!

All right, let's take a moment to review what we've learned. When you compare you look for parts of a story that are the same. To contrast you look for parts that are different. And, finally, you can use a Venn diagram to help you visualize these similarities and differences. You can definitely read Louis Sachar's Holes and try these different things and make your own Venn diagram, but you should now be able to use these tools on just about any book or passage that you read. Good luck!

Explaining Relationships & Interactions in a Text: Lesson for Kids

Analyzing Multiple Accounts of the Same Event or Topic: Lesson for Kids

Comparing & Contrasting Characters in a Story

How to Determine the Number of Main Ideas in a Text

How to Compare Information in a Text: Lesson for Kids

Providing Reasons in an Opinion Piece: Lesson for Kids

How to Compare & Contrast Stories by One Author: Lesson for Kids