Kelley has been teaching middle school for six years and has a master's degree in educational administration.

When we compare things in math, we may say that something is equal to, greater than or less than something else. In this lesson, you will learn how to compare fractions with like denominators. Updated: 05/26/2020
Create an account

A fraction is a number that shows the parts of a whole. Fractions also represent numbers that are less than 1.

This model represents the fraction 1/4:

Here, one out of a total of four squares is shaded.

Fractions are composed of two numbers: the numerator and denominator.

The numerator is the top number. It represents how many parts have been selected out of the total number of parts. In this case, 1 is the numerator because only one square has been shaded.

The denominator is the bottom number. It represents the whole, or total amount. Here, the number 4 is the denominator because the model is made up of a total of four squares.

Let's write a fraction for this model:

Since two of the eight parts have been shaded, the fraction is 2/8 . 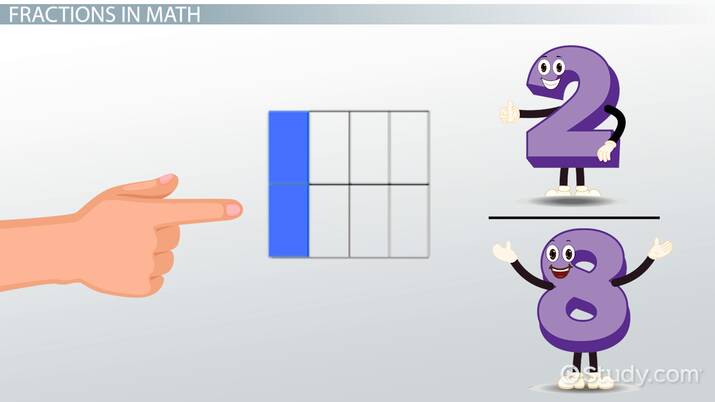 Coming up next: How to Read & Write Decimals to the Hundredths Place: Lesson for Kids

For example, 3/8 and 6/8 have like denominators because they both have a denominator of 8.

Let's look at an example. Say your friend asks you if you want 3/5 of a pizza or 2/5 of a cake. You probably want the bigger piece, right?

When comparing fractions, we usually use symbols to show if a fraction is less than, or greater than, or equal to another fraction.

Let's review. A fraction is a number that shows the parts of a whole. Fractions represent numbers that are less than 1. In a fraction, the numerator is the top number, which represents how many parts have been selected out of the total number of parts. The denominator is the bottom number, which represents the whole, or total amount. Like denominators have the exact same bottom number, which makes them easy to compare. When comparing fractions, we usually use symbols to show if a fraction is less than, greater than, or equal to another fraction.

Comparing Fractions With Like & Unlike Denominators: Lesson for Kids

Comparing Fractions with Unlike Denominators

How to Measure & Compare Liquid Volume: Lesson for Kids

Fractions As Parts of a Whole: Lesson for Kids

The Relationship Between Multiplication & Division

How to Find Equivalent Fractions on a Number Line

How to Estimate Liquid Volume: Lesson for Kids

How to Measure & Compare Weights: Lesson for Kids

Equivalences Among Metric Units of Measurement: Lesson for Kids

What is a Benchmark Fraction on a Number Line?

How to Decompose Fractions: Lesson for Kids