Explore how comparative politics is used to compare differences between various countries' governments to better understand those societies. Review more about comparative politics and see how structure, function, and political culture are compared. Updated: 11/04/2021
Create an account

What Is Comparative Politics?

Since the time of Aristotle, we have tried to compare different governments. For the Greeks, it was about trying to find some form of ideal government. For us, it is often about telling others why they don't have the ideal form of government. After all, Winston Churchill said that democracy was the worst form of government, that is …except for all the others.

But how do we compare the governments of different countries in a truly systematic way? Sure, we can say that the U.S. has a president and the UK has a prime minister, but how can we go deeper than that? Better yet, what can we find out about the people who framed a government when we dig deeper?

Political scientists can compare governments with respect to everything from the size of their legislative bodies to the absence of wigs in a court of law. For most practical purposes, however, we can broadly classify governments by using three frameworks that compare the structure, function, and political culture of each system. 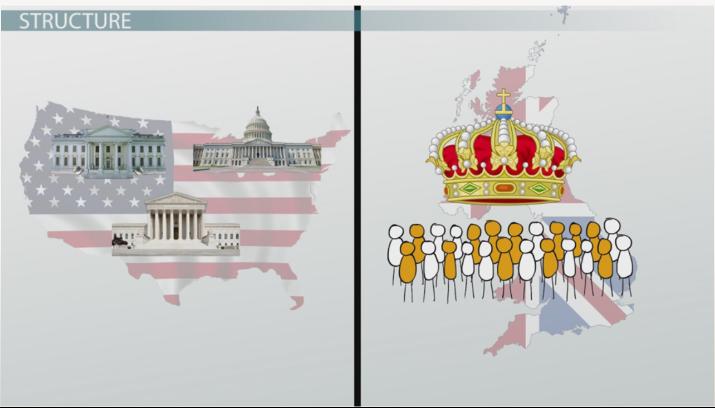 By looking at the structure of each government, we are really looking at the bones of that political body and refers to the actual setup of a given system. In the U.S., we have three branches of government. Why? For the founding fathers, stability was very important and the thought of having one branch overrule the others or even two branches overruling the third was out of the question. Shocking that our founding fathers would have preferred compromise, but the government was never meant to be efficient.

On the other hand, the British have never had an issue with stability. As a result, power comes from the monarch, who has granted it to the Parliament. Yes, there is a question as to what would happen if the monarch ever said No to Parliament, but it is akin to asking what would happen if the U.S. president ordered the Marines to invade Congress. In the British mind, it's simply too far-fetched to cause concern.

If the structure of the government is the bones, the function is the muscles, tendons, and ligaments that cause a government to move and refers to any special ways of doing things. Here, too, countries differ. In the U.S., the government is supposed to operate in a completely different sphere than religion. In the UK, prominent bishops are part of the House of Lords. In Iran, certain religious minorities are guaranteed seats in the Parliament of the Islamic state.

Chances are that you are friends with someone who sees the political world differently than you do. You may even be married to them, in which case you get to either make jokes about canceling each other's votes every four years or someone ends up on the couch. The point is that in the United States political views are just another aspect of someone's life, no different than religious views, job, education, or anything else. Sure, we may tend to associate more with someone with similar views for other reasons, but it is rare to completely ignore someone for their beliefs, with social media rants excepted, of course.

This importance of politics in daily life is best described as political culture and is the heart and soul of a country's political system, expressing its true emotion, and informs as to how passionate a people is about the political process within a government. However, in Italy, political parties are so ingrained in the culture that they have their own sports leagues. That's right, your political beliefs are so central that they help guide who you hang out with. The exact reverse is true in Lebanon, where you vote solely based on your religious and ethnic identification.

Again, the reasons for this are deeply rooted. In the United States, politics has only in the last few decades began to be anything we talk about outside of an election cycle. On the other hand, Italian politics is deeply divisive in a country that was assembled together from several smaller states less than 150 years ago. Finally, with respect to Lebanon, the country's political system was originally set up with respect to ethnicity and religion, with no mind made towards actual political question. Those issues were meant to be resolved outside of the political arena.

Once you have finished studying this lesson, see to it that you can identify the three frameworks by which governments are classified.

The Distribution of Power in Government

Political Systems & Structure of the U.S. vs. Great Britain

The Relationship Between Reliability & Validity

What is Politics? | Examples of Politics?