Impressionism dominated the 19th century, but it was followed by Post-impressionism which was a sort of evolution of the artistic style. Learn the primary themes in each, and note the differences of art and style between Impressionist and Post-Impressionist works. Updated: 11/07/2021
Create an account

We've all heard of evolution, right? Fish become lizards, lizards become monkeys, and monkeys become humans. Of course, some people may debate on how much difference there is between those last two. Ever been in the teacher's lounge when someone brings snacks? Evolved may not be the best word to describe it. Anyway, although animals evolve into something new, there are still similarities that are never lost.

Why do lizards have four limbs, just like we do? Because we share some ancient evolutionary ancestor. Well, this same basic idea is true of art as well. Old styles transition into new styles, but you can always find traces of the styles that came before. At few times is this clearer than at the very end of the 19th century, when the style of impressionism was being slowly replaced with a new movement called post-impressionism. See, even the name shows what I'm talking about. It's moved beyond impressionism, but clearly could not have existed without its artistic ancestor. 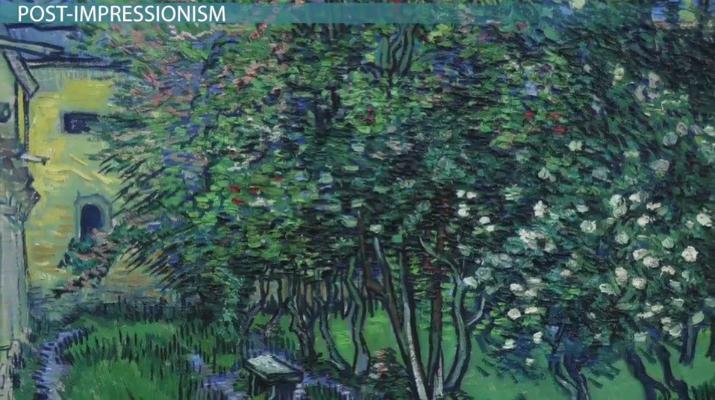 Coming up next: Autobiographical Elements of Post-Impressionist Art

Let's start off with a brief recap on our artistic ancestor here. Impressionism was a 19th-century artistic style that focused on the ability of art to capture a moment passing through time. That last part is important. While several artistic movements tried to present a single moment in time, most of them did this by freezing a moment in time. Through a study of the effects of light, and thick layers of oil paint often applied in rough brushstrokes, the impressionists showed that moment as it passed through time. Not frozen, just a fleeting experience. This meant that impressionists focused on scenes of daily life which they could witness and experience.

It also led to a new way of thinking about art, especially painting. While most previous artistic movements were all about the subject of a painting, impressionists encouraged viewers to focus on the canvas itself. They wanted people to examine both the subject of the painting and the painting itself, forcing the viewer to acknowledge that art can only present a moment, not create one.

So, that was the Impressionist movement in a nutshell. Now that we know what to look for, we can try and find the traces of impressionism in other movements. As impressionism started going out of style, artists evolved and pushed the accepted convention of the movement into something new. We call this next era post-impressionism, but really this was not just one style of art. Impressionism gave birth to expressionism, pointillism, neo-impressionism, symbolism, cloisonnism, synthetism, and more. Each of these styles was unique, but shared common traits. Post-Impressionist movements focused on line and color instead of light but continued to force the viewer to focus on the canvas and explore the ways that our eyes perceived the world around us.

One of the most concrete focuses of the post-impressionists was their focus on color. These artists were interested in the way that our brains perceived color to help us understand an object or scene. Look at this painting, Mont Sainte-Victoire by Paul Cézanne:

What do we see? Color! Wide, flat patches that break up a scene into basic colors and explore how these patches related to create a complete image. Post-impressionists broke up complex images into simple arrangements of lines and colors and let your minds turn that into something more. Impressionists did something very similar but through studying the effects of light and by blurring lines between colors. So, the post-impressionists had unique styles, but were pretty clearly building upon the ideas of the impressionists.

Another great example of this is A Sunday Afternoon on the Island of La Grande Jatte, painted around 1884 by Georges Seurat.

Now, from this view, we can tell pretty clearly what this scene is. But the closer you get, the more difficult that becomes. Just like how impressionist paintings can only be understood from a distance, this painting is incomprehensible if you stand too close.

But the reason is different. Seurat didn't paint in broad strokes, but in thousands of tiny, individual dots. These dots are not the complex shades and hues we see but basic, simple colors. For example, look at the trees. From a distance, we see leaves, shadows, etc. But if you stand right next to the painting, you'll see yellow, blue, and bright green dots. Once the dots are too far away to see, our minds mix these basic colors into various, complex shades of green, when really they are just different patterns of these basic colors. Crazy, right? Now, this may not necessarily look like an impressionist painting, but you can tell that they are related. Post-impressionism has simply evolved to accommodate changing tastes and ideas about art.

At the very end of the 19th century, art evolved, creating something that was new, but still connected to older styles. The original style was impressionism, which strove to capture the feeling of a fleeting moment through the use of light, rough brushstrokes, and blended colors. The several styles to evolve out of this are collectively known as post-impressionism, which focused on the use of color and line to explore how the mind perceives the world.

So, rather than blurring colors and focusing on light, post-impressionists broke scenes into the most basic components of line and color. Post-impressionist painting, just like impressionist work, can only be understood from a distance, forcing the viewer to focus on the physical canvas as much as the subject. So, similar goals but different ways of achieving them, making these styles unique, but still clearly related. Sometimes art, like nature, just needs to evolve.

Which of these characteristics of Seurat's A Sunday Afternoon on the Island of La Grande Jatte was NOT a trait that is also found in impressionism?

The Impact of Printmaking on 19th-Century Art

The Impact of World Wars I & II on the Arts