During the Restoration of the 19th century, liberalism and socialism competed for influence in Europe. Learn about these two ideologies and explore examples of how they influenced the economic, social, and political movements of the time. Updated: 10/04/2021
Create an account

Some opposites in this world just don't mix: oil will almost never combine with vinegar, and it's darn near impossible to get two positively charged magnets to touch each other. In the 19th century, there were two competing political and economic philosophies equally as opposed to one another as two positive magnets: liberalism and socialism. In this lesson, we will learn exactly what these two competing philosophies were and see how they clashed with one another in the 19th century. 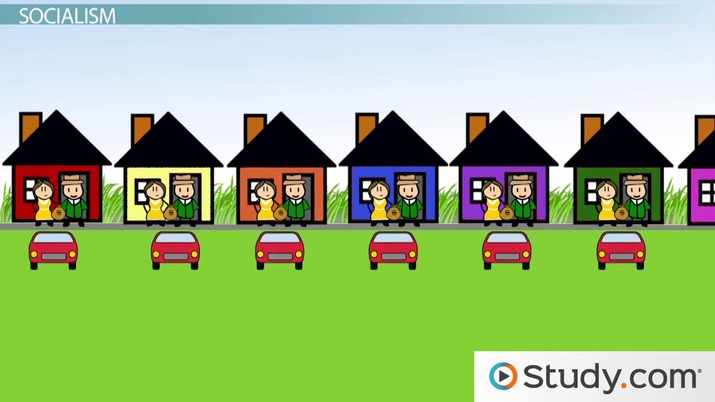 Coming up next: Political Restoration and Reform in Europe

'Liberalism' today is almost a dirty word in American politics, and it's often associated with Democrats. It might come as a shock, then, that 19th-century liberalism contained all of the ideas that 21st-century Republicans champion! Indeed, 19th-century liberals trusted in the virtues of the free market and believed that, if left to its own devices, the market would largely regulate itself. Additionally, property and property rights were considered incredibly important by liberals. Many of the economic concepts 19th-century liberals believed in were first formulated by the 18th-century English philosopher and economist Adam Smith.

Hand-in-hand with this belief in economic freedom was liberalism's belief in greater political freedoms for the population. Among these were various things we today consider commonplace: universal voting rights, the right to due process of law, and freedom of religion, speech, and the press. Though we may enjoy all of these rights today, few if any of these things were standard under the monarchies of the 19th century.

Liberals often radically stated that sovereignty resided not in the state but in the individual, implicitly attacking the legitimacy of European monarchies. By extension, liberals believed personal freedoms were more important and more essential than the power of the government. According to liberals, the government received its power only through a group of people consenting to be governed by the government's laws. This idea was considered dangerous at the time - it undermined the traditional power structure of the monarchies where power was based at the top in the king and not in the people.

Liberalism's chief rival, socialism, was the product of 19th-century philosophers like Karl Marx and Friedrich Engels. Whereas liberalism largely focused on the rights of individuals, socialism had a more collectivist mindset. Through focusing on the betterment of society as a whole and not just the predicament of individuals, socialism hoped to correct social inequality and other effects of the Industrial Revolution.

Socialism hoped to do this through reversing the property rights liberals so highly prized; rather than ensuring the right of the individual to own personal property, socialists believed that all property should be owned by the state. This idea was meant to confront the rampant exploitation of workers witnessed during the Industrial Revolution. Workers during the Industrial Revolution worked long hours (often 60 hours a week or more) and were paid little. According to socialists, capitalist factory owners could do this because they owned the factories, property, and resources in which the workers - the vast majority of the population - worked. The solution to this was simply to wrest control over the means of production away from the capitalists.

According to socialists, once the state had taken control of property, it was the duty of the state, as entrusted by the people, to distribute the resources of the state equally amongst the populace. Each person would receive adequate compensation according to their need, which would allow each worker to live and work free from worry about monetary concerns and instead focus on their work.

In order to fully understand how liberalism and socialism worked in the 19th-century world, let's take a look at a few examples of these two ideologies in action. In the 19th century, liberalism was a hotly debated topic. Most liberals were businessmen and other professionals who had a keen interest in freeing the economy of the restrictions and duties traditionally imposed by European monarchies. Several laws were passed in Great Britain and elsewhere that made free trade easier and gave greater rights to individuals.

For example, various reform bills were passed in the mid-19th century that were both socially progressive and deregulated the economy. In 1833, Great Britain abolished slavery, and several acts were passed that restricted a worker to a 10-hour a day shift and made 13 the minimum working age. At the same time, reform bills removed tariffs and other measures that hampered the economy. As a result, Great Britain emerged from the 19th century both as a hub of economic opportunity and a relatively socially progressive nation.

Socialism had a slower start than liberalism, largely because socialism was only formulated by men like Karl Marx in the mid-19th century. However, though socialist ideas would have their greatest impact in the 20th century in places like Russia and Eastern Europe, this did not stop European socialists from meeting to discuss socialist ideas in the 19th century.

Indeed, in 1864 Marx and other like-minded intellectuals and workers' groups met at the First International Workingmen's Association in London. Leaders there discussed the plight of the working class and plans and ideas for becoming politically active. Afterward, socialist parties cropped up across Europe, including in Germany, where it was encouraged by Marx himself. These parties, although small at first, pressured governments into acknowledging and addressing the needs and concerns of the working class.

Socialism in Europe also became revolutionary, because many 19th-century socialists believed the only way to successfully implement socialism would be through violent upheaval of the existing order. This is best displayed in the case of the 1871 Paris Commune. Shortly after France was humiliated by Prussia in the Franco-Prussian War, a coup d'état by French socialists and anarchists installed a communist-style government in Paris in March. The Commune itself is not important - it achieved little of substance and was itself overthrown in May - but it is indicative of the radical means socialists increasingly felt were necessary.

Liberalism and socialism were both important parts of 19th-century political philosophy and are still important ideas that influence current political debate. They are also both incredibly different.

Liberalism champions the individual, especially his right to own property. Liberalism fought against the economic restraints and tariffs monarchies had traditionally placed on goods, preferring a free, international market instead. Liberals tend to be businessmen and professionals who would profit from greater economic freedom.

Socialists, on the other hand, abhorred the economic exploitation capitalists practiced upon their workers. Rather than freeing the economy of its restraints, socialism sought to fundamentally alter the economy by removing the right to personal ownership and placing total control of property and goods in the hands of the state - a frightening prospect for classical liberals.

Liberalism, Radicalism, and Republicanism in the 1800s

Europe After Napoleon: Restoration & the Balance of Power

The French Wars of Religion: Catholics vs. the Huguenots