Writing. It is everywhere and serves many functions in our society. However, the written word must follow specific guidelines in order to be effective communication. One such guideline is word order, which simply refers to the order words must fall in a sentence. Imagine that you are reading an article and you come across this sentence: 'Important for is to order written effective be word communication.' Does this make any sense at all? Of course not! This is because the word order is completely messed up. Reorder the words and you can clearly understand the message: 'Word order is important for written communication to be effective.'

One important aspect within word order deals with subject-verb agreement, which means the subject and main verb must always agree based on number. Remember that the subject is the main person or object doing the action, and the verb is the main action or state of being. For example, 'The boy runs to the street corner every morning.' The subject is the 'boy' and the verb is 'runs.' The singular subject 'boy' must be followed by the singular form of the verb, which in this case is 'runs.' Don't get confused and think the singular form is 'run,' since 'runs' ends in the letter 's.' The singular form of 'run' is actually 'runs' because it agrees with singular subjects.

When sentences remain simple, it is usually easy to recognize and fix disagreement between subjects and verbs. You can usually just say the sentence out loud and check to see what naturally comes off your tongue. However, our language is full of many complex sentences, which may make subject-verb agreement more difficult to establish. Let's look at some common problems with subject-verb agreement. 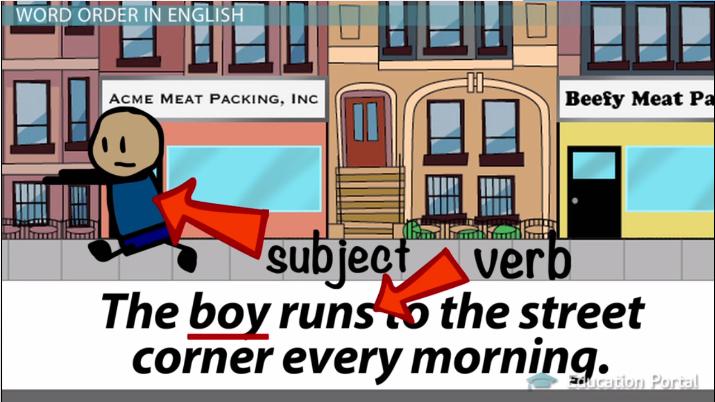 Coming up next: Conjunctions: Coordinating & Correlative

Look at this question: 'What is Katie doing?' What is the subject? 'Katie' is the main person in this sentence. What is the action? The action is actually the verb phrase 'is doing.' The subject, Katie, comes in between these two verbs. You still have to make sure the subject agrees with the verb. Would you say 'Katie is doing' or 'Katie are doing?' 'Katie' is a singular subject, and you would use the first version since 'is' is the singular form of 'to be.'

Here is another example: 'Up the mountain climbs the lion.' What is the subject? The 'lion' is doing the action in the sentence. What is the action? The lion 'climbs.' In this sentence, the subject is coming after the verb, but you still need to make them agree. The lion is singular and so uses the singular form 'climbs.' If the subject was changed to plural, like in 'Up the mountain climb the lions,' then the verb changes to the plural form 'climb.' The important thing to remember with inverted word order is to always find the subject and make the verb agree.

For compound subjects, you must note the connecting word in order to determine the proper way to make the verb agree. For example, in our sentence, our two subjects are connected with the word 'and.' This means we have a plural subject and therefore need the plural form 'run.' With a compound subject connected by the word 'and,' this means both people are doing the action, and so you need to use the plural form of the verb.

The key to compound subjects is the connecting word. If subjects are connected with word 'and,' then use the plural form of the verb. If connected with 'or' or 'nor,' use the noun closest to the verb to establish subject-verb agreement.

To review, word order, which is the order words must fall within a sentence, is essential for communication. One problem that occurs with word order is ensuring each sentence has subject-verb agreement, which means the subject of the sentence agrees in number with the verb.

To ensure you have subject-verb agreement, beware of inverted word order. This occurs when the subject comes after the verb or in between two verbs. No matter where the subject is, the verb must still agree in number.

Last, don't be fooled by interrupting phrases. Any words that come between the subject and the verb should not be considered when determining agreement. Identify the true subject and ignore the interrupted phrase.

Keep these tips in mind and you'll be sure to always have true subject-verb agreement.

After completing the lesson, you should have the ability to:

How to Identify Errors in Comparison, Correlation & Parallelism

How to Identify Errors in Coordination & Subordination

What Are Collective Nouns?

How to Write a Poem: Lesson for Kids

What is a Dependent Clause? - Definition & Examples

How to Write Logical Sentences and Avoid Faulty Comparisons