Theorist Auguste Comte was one of the founders of the study of sociology who offered classic arguments for how global society has evolved over time. Learn about Comte and examine the three stages of society that he identified, including the theological, metaphysical, and scientific stages, as well as his theory of positivism and how it affected the study of sociology. Updated: 08/25/2021
Create an account

When you look up at the night sky, you can see both stars and planets. What do you think the planets are? This probably seems like a weird question - of course you know the planets are big balls of gas or rock that revolve around the sun. But is that the same answer someone would have given a thousand years ago? Do you think the answer might be different a thousand years in the future?

Our understanding of the world reflects how global society has changed over time and how people in general understand our world. Philosophers have been talking about the nature of society for thousands of years, going all the way back to ancient Chinese and Greek philosophers such as Confucius or Plato. This lesson focuses on a much more modern theorist - a sociologist named Auguste Comte.

Comte is famous for being the person who actually came up with the term 'sociology' way back in 1838 to define the study of society. So what did Comte say about how global society has changed over time? 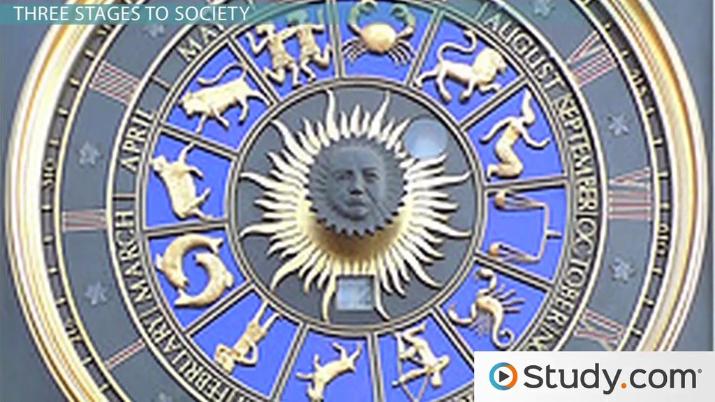 Comte believed that sociology could identify three major stages to the development of global society. The first and earliest stage is called the theological stage. Starting at the very beginning of human beings and social groups, Comte believed that in this stage, people viewed the world and events in that world as a direct expression of the will of various gods. In other words, ancient people believed that everything around them was a sign of active gods influencing their lives.

For example, ancient people actually believed that planets were gods in the sky, looking down on Earth. Even the sun was part of the world of the gods; ancient Greeks believed the sun was one wheel on the massive chariot steered by Apollo. If something bad happened, like a community experienced bad weather or an earthquake, people in the theological stage would explain that event as a god being upset and showing his or her anger to the people. In short, the theological stage meant that people used supernatural or divine explanations to understand society and the world.

Comte's second stage of society is called the metaphysical stage. Comte said that this stage started around the Middle Ages in Europe, or somewhere around the 1300s. In the metaphysical stage of society, people viewed the world and events as natural reflections of human tendencies. People in this stage still believed in divine powers or gods, but they believed that these beings are more abstract and less directly involved in what happens on a daily basis. Instead, problems in the world are due to defects in humanity.

An example of thinking in the metaphysical stage is people who believed that the planets were physical objects in space but that they influenced people's lives via astrology. Do you know what astrological sign you are? I was born in March, so I'm a Pisces. According to astrology, I'm supposed to be both imaginative and secretive. The idea here is that societies in the metaphysical stage still believe in some supernatural or magical aspects of life, but they are also rooted in the concrete parts of life.

If someone is sick, they might attribute that sickness to germs instead of a god being upset. However, metaphysical people still might try potions or spiritual rituals to cure the sickness, just in case! People might also blame the sick person for doing something wrong or somehow deserving to get sick due to some kind of problem in that person's life. You can think of a metaphysical stage as a transition stage between the first stage (theological) and the third and final stage. Let's talk about that last stage.

Comte's final stage for society is called the scientific stage. Just like the name implies, here people view the world and events as explained by scientific principles. In modern society, most people agree that the planets are physical objects made up of gas or rock. People believe that sickness is caused by germs and that medicine is the appropriate cure. If an earthquake happens, most people believe that's because of movement in the tectonic plates, not because a god is upset.

While it's easy for us, people who live in the modern scientific stage, to look back on people in the first two stages and think some of their beliefs are silly, keep two things in mind. First, lots of modern people still believe that one or more gods are active in what happens to our lives, and many people in modern society still believe in astrology. Second, keep in mind that in five hundred or one thousand years from now, people in the future might look back at us and think that our beliefs are silly.

The final important thing to know about Comte's theories in sociology is that he believed the general approach of the field should be one called positivism. For Comte, positivism is the belief that societies have their own scientific principles and laws, just like physics or chemistry. Positivism assumes there are truths about society that can be discovered through scientific studies and that our understanding of society should be based on actual data and evidence.

Comte's positivist philosophy has an important role in shaping modern sociologists because the general perspective today is that theories and ideas in sociology should be based on scientific studies. It's the general belief that true knowledge is only found through science. In short, Comte's idea of positivism is definitely a product of the final stage of society, the scientific stage.

Auguste Comte invented the term 'sociology' to refer to the study of society. Comte suggested that all societies have three basic stages: theological, metaphysical, and scientific. Finally, Comte believed in positivism, the perspective that societies are based on scientific laws and principles, and therefore the best way to study society is to use the scientific method.

After completing this lesson, you should be prepared to:

Max Weber: Verstehen and the Rationalization of Society

The Sociological Theories of Emile Durkheim

Louis Wirth's Urbanism as a Way of Life