Kim has a Ph.D. in Education and has taught math courses at four colleges, in addition to teaching math to K-12 students in a variety of settings.

Concave down is a form of function in a graph which has a mathematical implication. Learn the mathematical explanation of concave down along with its definition and how it is represented on a graph. Updated: 09/13/2021
Create an account

Definition of Concave Down

A function, which is a fancy word for equation, is concave down in some region if it looks like an upside down bowl, or the inside of an umbrella, in that region. The y-values in that region become bigger at a slower and slower rate as you move from left to right on the curve. Using calculus, you would find that the first derivative was decreasing in that interval and the second derivative was less than zero. Check out this image to help you visualize concave down. 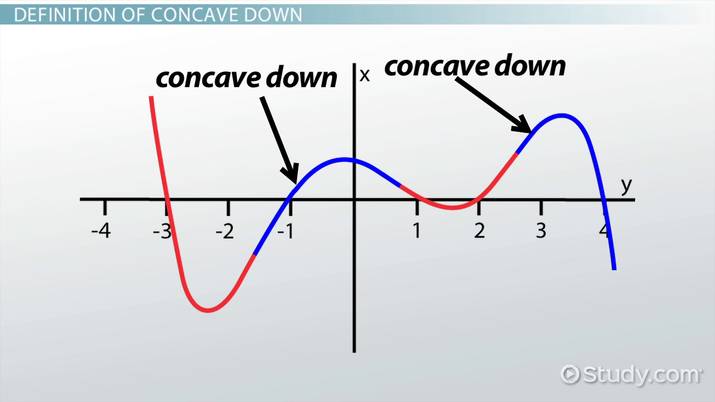 Coming up next: How to Solve a Rational Equation

The blue regions in the graph are concave down, while the red regions are concave up. The concave down sections look like the inside of an umbrella. Rainwater would roll off the top of them.

What Concave Down Means

Imagine that you start a brand new online karate school. After a huge promotion, you have 1,000 virtual students. You're going to get rich!

You quickly find out, however, that students start dropping like flies. Maybe the fact that you don't actually know karate becomes obvious to them. Or maybe the Internet just isn't a great way to teach martial arts. In any case, your karate enrollment drops quickly for a few months until you have no students left.

If you look at the karate student graph, you will see that it is concave down. During the first month (red on the curve), you lose students very slowly - your enrollment is now a little under 1,000. During the second month (purple), slightly more students drop out. You are down to about 900 students. The purple section of the curve looks a little steeper than the red section.

During the third month (pink) your enrollment drops even more. Maybe the word is starting to spread that your course is a scam, or maybe you just got them so excited about karate that they quit your course and sign up at the live class at the local strip mall. The fourth month (orange) and the fifth month (yellow) get even steeper. You can see by the length of the yellow piece of the curve what a big drop you had.

Over time, your decrease in students is getting bigger. You're not only continuing to lose students - you're losing them faster and faster.

If you were to draw a tangent line, which is a line adjacent to the curve (like the dotted line shown in our karate school example), at various points, you would find the slope of the line was decreasing as you moved from left to right. In this example, a tangent line drawn in the red section would be flatter than one in the orange or yellow section. Because the function is decreasing (it curves down as you move to the right), the slope is always negative. A steeper negative slope suggests a 'more negative' number. A slope of -6 is smaller (less quantity) than a slope of -2. So, the slope is decreasing.

The Mathematics Behind Concave Down

Let's take a few moments to review what we've learned about concave down in this lesson. Concavity in a function, which is a fancy word for equation, tells you how the steepness of the curve is changing as x changes. If a curve is concave down, then the slope of a tangent line to the curve is decreasing as x increases. The curve will look like a bowl facing downward, or an umbrella, in that region.

So, following this lesson, you should be able to do the following:

The Relationship Between Continuity & Differentiability

How to Determine Maximum and Minimum Values of a Graph

Average and Instantaneous Rates of Change

How to Find Critical Points of a Function