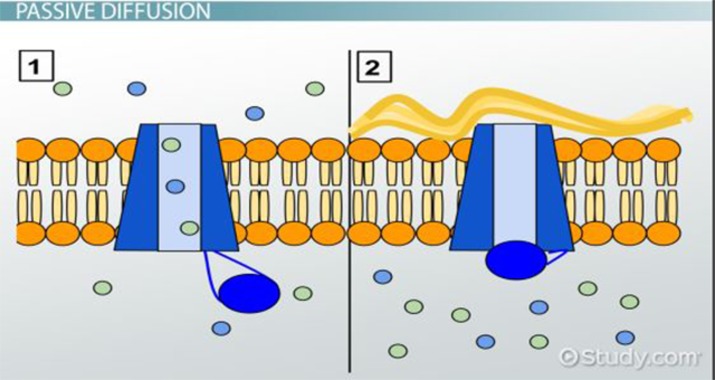 Coming up next: Conjugate Base: Definition & Overview

Solutes moving through solution (liquid or gas) happen by random motion until there are equal numbers of particles in the two areas. Random motion is defined as movement that occurs by chance because there is no order or regular system by which the movements of the particles shift in the solution or gas.

Passive diffusion does not require energy; it happens by random motion. In a solution or gas that has an area of high numbers of particles and an area of low numbers of particles, the particles will diffuse or move from the area of higher to the area of lower concentration. A common example of this is a cup of water that you drop food coloring into. The food coloring is concentrated when dropped into the cup of water; however, after a few seconds pass, the particles become lighter in color as they move to the lower concentration level. Again, this happens without energy so it is known as passive diffusion.

Another type of diffusion that is passive because it does not require energy is facilitative diffusion. This is how particles move across a membrane. This usually refers to a cell membrane, so that is the description we will use. A cell membrane is a barrier that usually cannot be crossed by all particles or ions. Ions are just charged particles, which means they have either a positive charge or a negative change. The particles cannot move freely across the membrane into and out of the cell; they must be assisted by a carrier. This is called facilitation.

This carrier is usually a protein that is able to cross the cell membrane. It has a special shape and usually can carry a small particle or ion across the cell membrane through a specific channel. This process can either happen at any time, or the channel may be opened and closed at different times depending on the cell's needs.

To assist you with this explanation, think of the process of a person having surgery. The person having surgery cannot go into the operating room; they must first be taken into the surgery suite. Also, the surgery door would not always be open to the person - the doors would only be open when they are scheduled for surgery. In addition, patients cannot go into surgery by themselves - the nurse takes the person through the operating room doors. Do you see how this relates to the process of facilitated diffusion? Remember, the protein carries the particle or ion across the membrane through a channel in the cell membrane wall.

The carrier in a cell used for facilitated diffusion is usually a _____.

Exocytosis Examples & Triggers | What is Exocytosis?

Intramolecular Bonding and Identification of Organic and Inorganic Macromolecules