Michelle has taught at the elementary level and has earned a master's degree.

We know the three little bears tried out chairs, beds, and porridge. But let's say they got thirsty after they tried the porridge, so they decided to make some sugar water. To make their sugar water, they created a solution: a combination of two substances. The two parts of this solution are the sugar (which is the solute) and the water (which is the solvent). 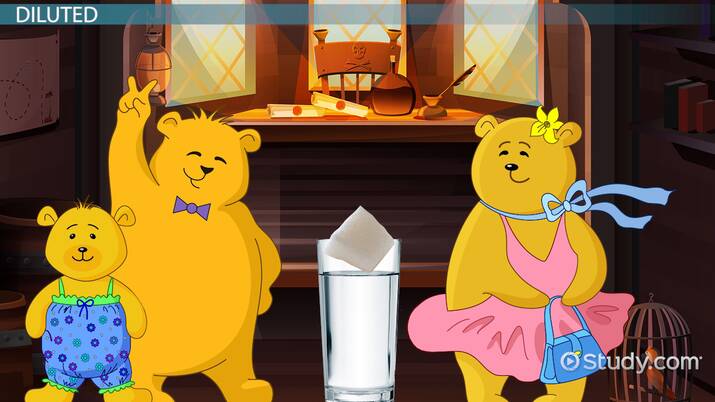 Coming up next: Michael Faraday Lesson for Kids: Biography & Facts

Solutions can be grouped according to how much solute is in a solvent. Let's go back to our bear friends, who each had one cup of water. Mama Bear put one tablespoon of sugar into her water to create a diluted solution. Have you ever not put enough sugar in Kool Aid? It tasted watered down, didn't it?

A diluted solution is when the amount of solute in the solvent is very low. All of the solute will easily dissolve, or completely combine with the solute.

Baby Bear put two tablespoons of sugar in his water. It tasted perfect - just the right amount of sugar. And as Baby Bear looked closer at his solution, he realized all of the sugar had dissolved. This is called a concentrated solution.

In a concentrated solution, the solute has reached its maximum point of dissolving into the solvent. It's not too little or too much; it's just enough. In other words, if a solution has reached its concentration point, any more solute added will not dissolve because there's no more room for it.

Now, Papa Bear had a sweet tooth, so he put four tablespoons of sugar in his water! It tasted very, very sweet. He put so much sugar in his water that not all of it dissolved. When he looked at the bottom of his glass, he noticed that the sugar that didn't dissolve settled to the bottom. No matter how much he stirred his water, that sugar would not dissolve.

When the amount of solute in a solvent is so high that not all of it will dissolve, that solution is saturated. In a saturated solution, the solute that does not dissolve will be visible.

As the three little bears were drinking their sugar water, Uncle Bear stopped by for a visit. He had an even sweeter tooth than Papa! He started off with the same amount of sugar as Papa Bear, but then decided to add just one more tablespoon. Remember, Papa Bear's solution was saturated. By adding that extra tablespoon, Uncle Bear made his solution supersaturated.

Uncle Bear didn't like all of that sugar settling to the bottom of his cup, so he decided to heat up his sugar water on the stove, and that extra sugar finally dissolved.

As the water cooled, the extra sugar crystallized, or changed back into solid form. This happened because as the sugar water was boiling, some of the water evaporated, leaving behind an even higher amount of sugar (solute) than water (solvent). Cooling the water also decreased how much solute could be dissolved. That extra sugar needed somewhere to go, so it turned into crystals.

Okay, let's review what we've learned. There are different types of solutions depending on how much solute is in the solvent. We first learned that:

A supersaturated solution has so much solute that the un-dissolved material will actually crystallize, or change back into solid form. Doesn't that classic folk tale of the three bears make so much more sense now?