Concept attainment is a strategy focused on critical thinking to identify commonalities between different pictures or words. Learn why this strategy works, and see examples of this model in real-world applications. Updated: 11/30/2021
Create an account

What Is Concept Attainment?

Looking at this set of pictures, what theme do you think all the pictures have in common? If you guessed, 'weather,' you are right. The pictures and text associated with the pictures (sunny, rainy and cloudy) all have one thing in common - they are symbols and descriptors of the weather!

That was pretty easy, you may say! Well, that was a very basic and elementary example of concept attainment. Concept Attainment is a teaching strategy created by Jerome Bruner that encourages critical thinking and involves a teacher giving students a group of pictures or words and asking them to decide what the pictures or words have in common. The concept or common theme, therefore, is kept from the students so that they can use their critical thinking skills to figure it out themselves! It really is a fun teaching method and fun for students as well! 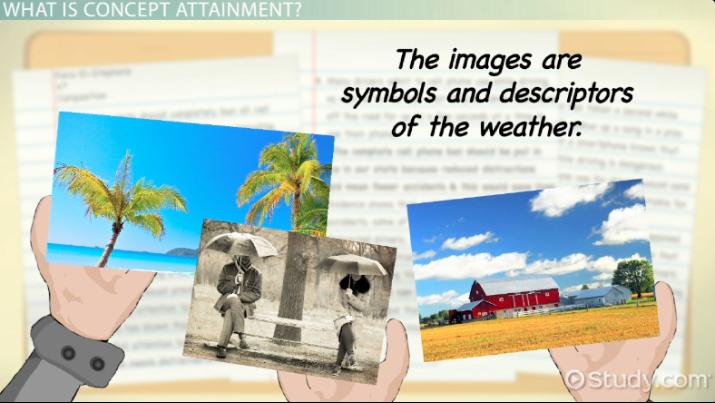 Coming up next: What is Phonics? - Definition & Overview

Why Does Concept Attainment Work?

Jerome Bruner developed the concept under the premise that humans naturally tend to group together things of similar characteristics as a coping strategy to deal with the diversity and complexity in our environments. Political parties, eating habits (vegetarians, vegans, meat-eaters, etc.) and religions (Christian, Catholic, Jewish, Muslim, etc.) are all categories that we group people into, for example. Humans love to group things! That is why this learning strategy is relevant and works so well!

Here's another example of the concept attainment model at work:

He would hold up each card of an animal and say 'yes' when there is a picture of a mammal or 'no' when there is a picture of another type of animal. The students would hopefully realize, sooner, rather than later, that the commonality of the 'yes' animals were that they were all mammals! They would only be able to do this if they knew the common attributes of mammals.

How Families Foster Literacy at Home

The Role of Motivation in Self-Regulated Learning

What is Remedial Education? | Remedial Teaching and Students