In concrete poetry, writers use word patterns and typographical effects to create visual images that express meaning and messages. Explore the definition, the history, and various examples of this form of verse. Updated: 10/21/2021
Create an account

Do you sometimes have trouble expressing yourself simply using words and rules of grammar? If so, perhaps you should consider writing concrete poetry, a form of verse in which words or lines are arranged to create a physical image. This is achieved when the poet uses word spacing, line length, page orientation, or other physical elements of writing (like typography) to reflect or comment on the poem's subject or theme.

Sometimes referred to as visual or pattern poetry, concrete poetry has been around for about as long as we've had writing systems to exploit artistically. In ancient Greece, poets would arrange their works to take the shapes of axes, musical instruments, altars, and various other items, often using them to adorn temples or for other religious purposes. Even some Jewish traditions have their own early pattern poetry known as Shiviti - poetic meditations on ritual practice and the nature of God which frequently took on the form of the menorah.

The practice of visual poetry remained relatively unchanged throughout the Renaissance and into the modern era. However, following an intense interest in the genre in Brazil during the 1950's and 60's, concrete poets have since experimented more with the relationships existing between words and images. Contemporary writers of pattern poetry like to explore the complex ways in which we assign meaning through language and sensation (like eyesight and hearing), frequently leaving the interpretation of the images as subjective as possible. Let's look at some examples to see if you can detect this progression in the art of concrete poetry. 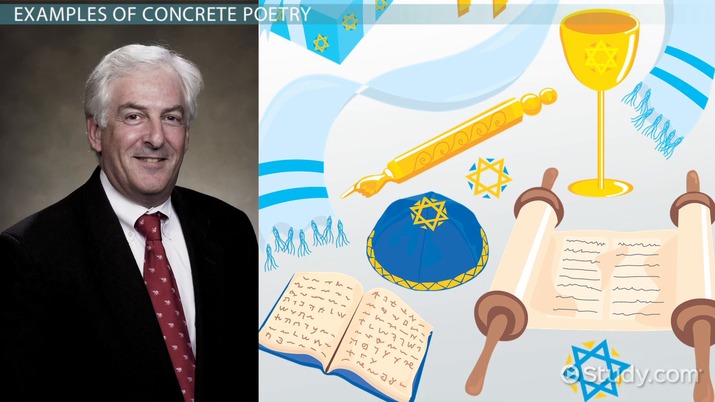 Coming up next: End-Stopped Line in Poetry: Definition & Examples

Following the example of the Greeks and others before them, poets of the Renaissance revived the practice of creating visual poetry representative of its typically religious subject. These altar poems, as they were called, were extremely popular in the 16th and 17th centuries, and many of the most famous examples of concrete poetry from this period - such as George Herbert's aptly named 'The Altar' - are actually works of this type.

Although interest in concrete poetry began to resurge in Brazil during the mid-20th century, Swiss-Bolivian author Eugen Gomringer was at the forefront of the movement. Sometimes called the 'father' of modern concrete poetry, Gomringer was one of the first to begin experimenting with the bounds of human sense-making abilities. With his own unique style of visual poetry, which often involves geometric figures, Gomringer demonstrates how even repeating a single word in a specific pattern can nuance that word's meaning.

Contemporary writers continue to innovate pattern poetry all the time, sometimes even by recalling old traditions. Given that many of his works have the same sorts of meditational focuses, the concrete poems of Hank Lazer have been compared to traditional Hebrew Shiviti. His 'L'chaim', for instance, depicts concepts and rituals involved in the celebration of Passover in a way that is meant to have the viewer's mind centered on the (ideally personal) aspects of this Jewish holiday.

Sometimes called visual or pattern poetry, concrete poetry is a form of verse in which words or lines are arranged to create a physical image. These images are created when a poet uses word spacing, line length, page orientation, or other typographical elements to reflect or comment on the poem's subject or theme through visual representation.

The practice of fashioning concrete poetry has existed since antiquity; however, it has experienced several peaks in popular attention over the millennia. One during the Renaissance prominently featured the altar poem - visual poetry representative of its typically religious subject. The mid-20th century witnessed another resurgence in the genre, spearheaded by Eugen Gomringer, whose works like 'Silencio' have often earned him the title of 'father' of modern concrete poetry.

Concrete poetry is still evolving with works like those of Hank Lazer which recall the Shiviti: a traditional Jewish form of this blend of literary and visual art.

What Is a Haiku? | Examples of Haiku Structure

Bio Poem Format & Examples | What is a Bio Poem?

Surrealism in Literature | Examples and History

The Marriage of Heaven & Hell by William Blake | Summary & Analysis

Allusion Literary Device Overview & Examples | What is an Allusion?

Verb Phrase Overview & Examples | What is a Verb Phrase?

How to Write a Speech