The sound of cannon fire fills the air, and the scent of gunpowder hangs in the breeze. The life of a Confederate soldier during the Civil War was filled with experiences like this, and many more. In this lesson, you will learn all about the lives of Confederate soldiers. Updated: 02/29/2020
Create an account

The horn sounds. You grab your gun as you join the mass of gray uniforms marching toward the battlefield. Suddenly, you see the cannons firing in the distance as you charge toward the Union soldiers. And just like that, you wake up from your dream.

Although this was only a dream for you, for many Americans, it was reality. The Civil War was fought in the United States between the Northern states (the Union) and the Southern states (the Confederacy). During four years, many soldiers died fighting over slavery, money, and the right for states to make their own laws.

Would you have volunteered? 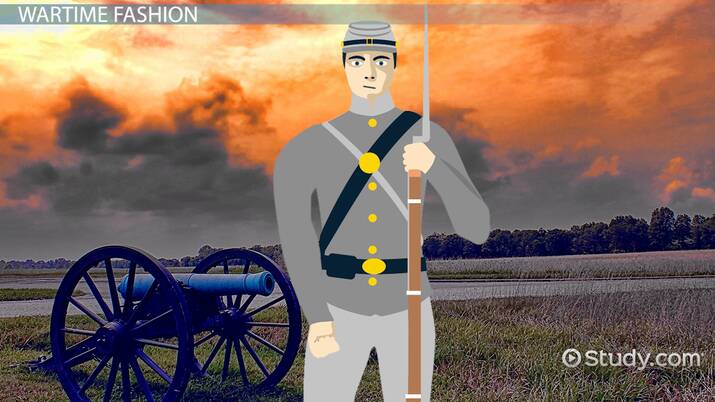 Coming up next: American Civil War Generals Lesson for Kids

Confederate soldiers are best known for their gray uniforms. A soldier's uniform was made of a gray wool coat, hat, pants, and a white shirt. Wool is a very hot material, so running around outside in the heat was like wearing your winter coat on a 100-degree day. Many Confederate soldiers only got their uniforms after another soldier died. And you thought those hand-me-downs from your older siblings were bad!

Confederate soldiers carried a lot with them. Each soldier had a gun along with an ammunition box on his belt. On his back, he would carry a sack with a blanket, canteen, cup, and small pan. Sounds like the only thing they didn't pack was the kitchen sink!

Most of a Confederate soldier's time was spent marching from one place to another and fighting or practicing to fight. In their free time, soldiers wrote letters to their loved ones, played games like checkers, whittled wood, made music, and prayed.

Food was also a problem. Soldiers survived off of dry biscuits called hardtack, coffee, salt pork, cornmeal, and fruits and vegetables they collected as they marched. By the end of the war, many soldiers were starving.

If you could survive the lack of money and food, you still might end up captured or dead. During the Civil War, soldiers who survived a battle could be captured by the Union and put in prison camps. Additionally, living outside with a lot of people meant getting sick was always a possibility. Throughout the war, around 95,000 Confederate soldiers died in battles, while around 200,000 died from disease or while in prison camps.

Facts About The South During the Civil War: Lesson for Kids

Friar Laurence in Romeo and Juliet: Soliloquy & Letter to Romeo

What Is the Chemical Equation for Cellular Respiration?