Lesson Transcript
Instructor: Ashley Bishop
On the surface, the conflict between Antigone and Creon appears to be that of protagonist versus antagonist, but there is more to this literary face-off than meets the eye. Updated: 01/22/2021
Create an account

In the Greek tragic tradition, there is typically a hero, also known as a protagonist, and a villain, also known as an antagonist. In Sophocles' Antigone, those roles are fulfilled by Antigone and Creon, respectively. After all, Antigone sacrifices herself to fulfill her moral duty to her family and the gods, and Creon stubbornly rejects Antigone's religious convictions as a rationale for disobeying his orders. This seems simple enough, right?

Let's explore the conflict between these two characters and the extent to which each one upholds the classical definitions of protagonist and antagonist. 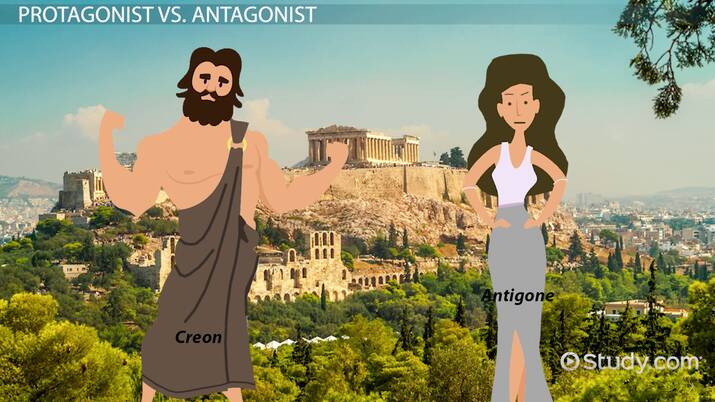 Coming up next: Who Is the Tragic Hero in Antigone?

Aristotle's ancient text Poetics describes the six pillars of Greek tragedy. Among them, Aristotle places character second in line behind the plot. In the Aristotelean tradition, character is defined by the delineation of virtue. A protagonist, or hero, is held in high esteem. His or her actions and words portray a person of high moral standard. The antagonist, or villain, is portrayed in the opposite manner, usually motivated by immoral impulses such as greed, jealousy, or arrogance.

Although it's generally accepted that Antigone is the hero, or protagonist, of this play, her juxtaposition to Creon poses some interesting questions about the nature of what constitutes a protagonist and an antagonist.

At the opening of the play, Antigone's brothers, Eteocles and Polyneices, have killed each other in a duel. King Creon considers Polyneices a traitor to his city, so he has ordered that no one may bury him. Antigone is determined that her brother should have ''his honor among the dead men.'' She is determined to bury Polyneices despite Creon's order that anyone who buries Polyneices will be executed.

Antigone, however, is also plagued by a hamartia, or tragic flaw. This is a typical feature among tragic heroes. She is besieged by pride, and does not listen to reason, despite her sister Ismene's pleas for reason and Creon's willingness to pardon her. Antigone prefers a righteous death to a morally passive life.

Creon's motivations are a bit more complex than the average villain. Throughout the play, he speaks to lawful reason. He is pragmatic to a fault and, like Antigone, he is also a victim of extreme pride. Unlike Antigone, however, Creon is willing to set his convictions aside and forgive Antigone's crime. Upon hearing from the prophet Teiresias that Antigone's death will bring about death in his own house, Creon decides to free Antigone, but it's too late. She has hanged herself.

Motivated by his pride and his lawful convictions, Creon's actual villainy is debated among scholars. His flaw, like Antigone's, is relatable. Villains in Greek tragedies are generally loathsome characters, but Creon bows to reason and an emotional appeal from Teiresias, revealing his emotional vulnerability. In the end, once Antigone's death triggers his son Haemon's suicide, which in turn triggers his wife Eurydice's suicide, Creon is despondent, calling himself ''vain'' and ''silly.''

Although audiences may relate to both characters, the conflict between Antigone and Creon develops long before the play begins. Creon has ascended to the throne because Antigone's father, the king before Creon, is deceased, and her brothers are essentially outlaws. Both brothers plotted against their father, and then fought each other over the throne after his death.

In a more modern context, Antigone may have been queen, but Creon adopted his nieces, Antigone and Ismene, claiming the throne for himself. Although Antigone does not challenge Creon's right to the throne, he is still threatened by her. She openly mocks his authority by disregarding his decision to not allow Polyneices' body to be buried.

Throughout Creon's speeches, there is also a strong tone of misogyny: ''So we must stand on the side of what is orderly, we cannot give victory to a woman.'' When his own son, whom he proclaims to love, comes to Antigone's defense, Creon lashes back: ''Your nature is vile, in yielding to a woman.''

In a way, Antigone yields to Creon's authority by willingly dying for her cause, despite Creon's irrational stance. She does not disavow his authority in any way, but she does use her disobedience to punish him, stating that, ''if Creon and his people are the wrongdoers let their suffering be no worse than the injustice they are meting out to me.''

Antigone and Creon have more in common than meets the eye. They are both flawed in the same way. Their strong convictions blind them to reason, but they stand on opposite sides of an emotionally divisive issue.

Creon is the pragmatic and prideful ruler whose authority must be absolute. He also shows some signs of insecurity over his right to reign and must squash Antigone's disobedience at all costs to convince himself and the city that he is the rightful king.

Antigone has lost every member of her family, except for her sister, and feels morally obligated to honor both of her brothers despite the circumstances of their deaths. She is outraged that Creon chose to honor Eteocles, but not Polyneices, and feels that she must set things right or suffer in the afterlife.

In the Greek definition of a protagonist, a tragically flawed character of high moral regard, one could argue that Antigone and Creon both display heroic qualities, and yet there is no greater villain than both of these characters. Perhaps the playwright, Sophocles, was trying to convey the idea that lines between protagonists and antagonists, or villains, were actually quite blurry, and perhaps the hero's truest enemy is herself.