Hayley is an experienced, certified teacher of English and art who holds a Master's degree in literature.She has taught all levels from elementary through college.

Explore the numerous literary conflicts to be found in Anne Frank's 'Diary of a Young Girl,' which was written when the Franks were in hiding from the Nazis in Holland during World War II.
Create an account

What Is Literary Conflict?

Have you ever felt at odds with the whole world and even with yourself? These are the feelings shared by Anne Frank in her diary, Diary of a Young Girl. Anne was thirteen when her Jewish family went into hiding from the Nazis in 1942 in order to escape deportation to a concentration camp. The Franks, the Van Daans, and Mr. Dussel were hidden by a few of Mr. Frank's trusted employees on the top level of Mr. Frank's business complex. Anne called their hiding place the Secret Annex. For a fun-loving, hyper teenager like Anne, it was almost unbearable to be stuck indoors 24/7. Although all were hiding for the same purpose, they were not free from conflict with themselves and each other.

Literary conflict is a character's struggle between opposing forces, both inside and with others. There are two major categories of conflict: internal, personal struggle within the character, and external, struggles the character has with forces outside himself or herself. The Diary of a Young Girl is full of Anne's internal and external conflicts. After all, isn't a diary the perfect place to vent about one's struggles? Anne certainly thought so, and her diary was her closest confidante when she lived in the Secret Annex between July of 1942 and August 4, 1944, the date of the Gestapo raid on the Annex and the arrest of all of its inhabitants. 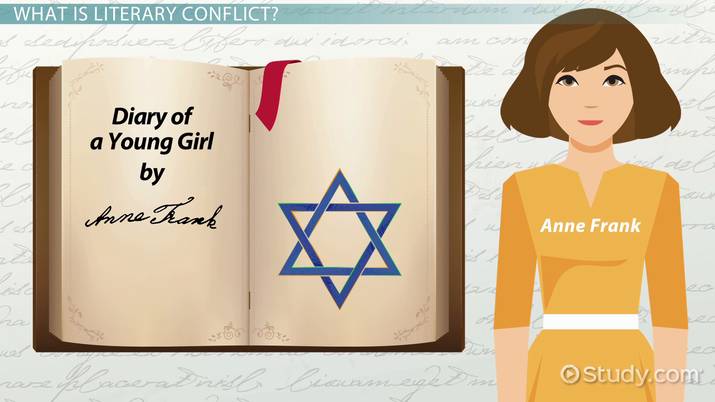 Coming up next: Hope in Anne Frank's Diary of a Young Girl: Quotes & Examples

Anne Frank's internal conflict stems mainly from the adolescent turmoil that most teenagers experience. She wanted very much to be a normal, goofy teenager. At some points, Anne stated that she felt like two different people. One was the fun, noisy, annoying Anne, and the other was deep, quiet, serious, and afraid to let it show because of her fear of being laughed at by others. Anne also shared her struggles with a lack of self-confidence. She dreamed of being a journalist or writer, but she questioned how she could accomplish such a dream due to her shyness and insecurities.

Anne often wrote about how she felt grown up one minute and like a child the next. She experienced tumultuous feelings about sex and relationships with boys. In particular, Anne wondered whether she and Peter Van Daan should be platonic friends or in a romantic relationship.

The Diary of a Young Girl reveals two different types of external conflict. The first one is called person vs. society. In this type of conflict, the main character struggles against prevailing forces in his or her society, community, or country and government. In the second type of conflict, person vs. person, the protagonist is pitted against one or more characters in the literary work.

Many of Anne's struggles were the result of the anti-Semitic society in which she lived, which ultimately led to Hitler's Nazi regime. Anne wrote about the awful reality that being a Jew meant having to live like a prisoner and eventually being put to death for the ''crime'' of being Jewish. She detailed what it was like to live under the repressive German Nuremberg Laws, and ultimately being deported to ''work camps'' which were actually concentration camps.

Anne struggled a great deal with living in the Secret Annex, which would not have been necessary at all had the Nazis never come to power. What Anne at first likened to ''a holiday in a strange little hotel'' soon became an oppressive, claustrophobic fishbowl, in which people argued constantly over petty issues and frequently grew irritated with one another. Anne and the other inhabitants of the annex had to tiptoe around and be virtually silent until all of the workers left the building at the end of each work day; they were not even allowed to use the bathroom during the day.

She wrote about the terror of nighttime bombing raids and fear of every strange sound. As food supplies dwindled, Anne and the other inhabitants struggled with semi-starvation. Anne poignantly wrote on October 29, 1943, ''I am a bird without wings who can't escape…A voice inside me cries, 'Let me out! I want to go into fresh air. I want to hear people laughing!' ''

The too-close quarters in the Secret Annex as well as Anne's adolescent moodiness sometimes brought out the worst in her. While Anne struggled with both Mr. and Mrs. Van Daan, Mr. Van Daan was the worst. The Van Daans found Anne to be an annoying little pest and often told her so. While Mr. Van Daan insulted Anne, Mrs. Van Daan constantly nagged and criticized her. The final straw occurred when Mr. Van Daan began to steal from the communal food supply at night.

While most teenage girls struggle with their mothers at least somewhat, the close confines of the Secret Annex brought the simmering tensions between Anne and her mother to a boil on more than one occasion. Mrs. Frank criticized her daughter and made what Anne called ''unkind jokes'' at her expense. Anne had to share her bedroom in the annex with the stingy, eccentric Mr. Dussel. While at first Anne attempted to get along with him, soon they fought day and night. Finally, Anne also struggled with her crush, Peter Van Daan, who was moody, sullen, and not at all interested in Anne at first.

There is a great deal of literary conflict to be found in Anne Frank's Diary of a Young Girl, both internal and external. Anne's internal conflict mainly stemmed from the growing pains experienced by most teenagers. The external conflicts in the diary are of two types.

First, there is a person vs. society conflict. Anne struggled and chafed against the Nazi regime that unjustly wanted to annihilate the entire Jewish population. Hitler's repressive laws and the anti-Semitic society in which Anne Frank lived caused her and her family to go into hiding in the first place and suffer fear, deprivation, and near starvation.

Second, there is a lot of person vs. person conflict in The Diary of a Young Girl. Anne experienced numerous conflicts with Mr. and Mrs. Van Daan, her mother, Mr. Dussel, and Peter Van Daan. Since Anne Frank's diary abruptly stops after the raid on the Secret Annex on August 4, 1944, the majority of conflicts in The Diary of a Young Girl sadly remain unresolved for the reader.

Conflict in Anne Frank's Diary of a Young Girl Quiz

Conflict is a significant literary element in Anne Frank's Diary of a Young Girl. What is literary conflict?