Each day we face conflicts, some large, some small. In this lesson we will analyze the conflicts in the play 'Antigone' and decide how they impact the work as a whole. Updated: 11/27/2020
Create an account

In literature, a conflict is a problem or struggle that a character deals with in a story. But of course, like characters, we deal with the same challenges in the real world. While real-life conflicts may not necessarily be as dramatic as fictional conflicts, as readers we can connect to the plight of our characters through personality traits and similar emotional experiences. Let's take a look at the conflicts in the play Antigone by Sophocles and analyze the importance of each through the characters' perspectives. 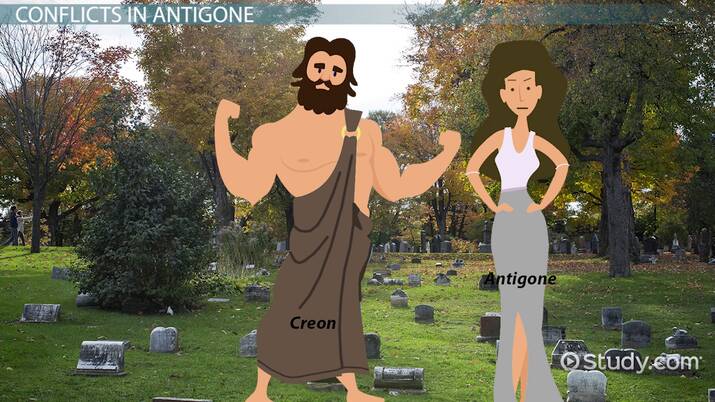 Coming up next: Antigone Vocabulary

The play opens with two sisters, Antigone and Ismene, discussing the death of their brothers, Polyneices and Eteocles. Their father, the infamous Oedipus, exiled himself and left the two brothers to take over the throne. Disagreements caused Polyneices and Eteocles to fight, and eventually Polyneices was banished from Thebes. He returned with an army to fight his brother for the throne, but both men ended up dying. This tragedy left the throne to their Uncle Creon, whose son Haemon happened to be engaged to Antigone. Talk about family drama...

Creon was close with Eteocles and felt that, since he remained in Thebes, Eteocles was true to his city. So, Creon buried his body with military honors. But Polyneices fought against Thebes, and Creon felt he was a traitor. He left his body to rot in the street and ordered that anyone who buried the body be stoned to death.

Antigone is heartbroken at the news of her brothers' deaths and decides she must bury the body to honor the laws of the gods. But when Antigone buries the body, she's going against the law of the newly appointed King, who happens to be her uncle. Creon, attempting to keep control over the people, must decide what to do with his niece. He decides to follow through with his stated punishment of death so he does not look weak.

Let's start by look at the internal and external conflicts experienced by Antigone in the play.

Finally, let's take a look at some of Haemon's conflicts.

Because of these conflicts, many characters in the play end up resolving their conflicts by taking their own lives. It seems power and control cause several characters to change their loving and compassionate ways, unable to see past the heat of the moment and realize how their actions could affect others on top of their own futures.

Antigone is unable to see beyond her pride, and along with Creon, suffers the consequences of stubborn ways. Ironically, both are fighting for family loyalty and unable to realize how similar they truly were, losing everything and everyone they care for in the process. Their conflict costs the lives of two others, Haemon and his mother, leaving the stage a bloody mess.