In 1951, social psychologist Solomon Asch conducted an experiment to study conformity and the effect of the group on individual decision-making. Learn about Solomon Asch's conformity study, the difference between informative and normative conformity, and the impact of Asch's experiment on psychology. Updated: 08/25/2021
Create an account

How much do you trust your own judgment? How likely are you to go along with a group, even if you think they might not be right? You might think you know the answers to these questions, but you might be surprised when you're put in a situation where you have to make a choice between what you think and what the group around you believes.

Solomon Asch was a famous social psychologist who studied conformity, or the extent to which people go along with the larger group. In his most famous study, Asch put subjects in a situation where they had to choose between the opinion of a group and their own opinion. You might be surprised at the result. 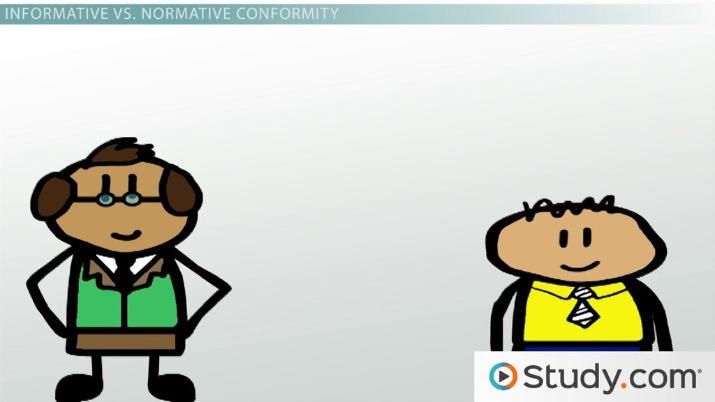 The study went like this: a participant came into the room with seven other people who the participant believed were also part of the study. In truth, the other people were confederates, or researchers who were pretending to be subjects.

Asch put two cards in front of the participant and the confederates. On one card was a line. The other card had three lines of different lengths. Everyone was asked which of the three lines was the same length as the line on the other card. Pretty straightforward, right?

But wait! Asch asked each person at the table to answer out loud, one at a time. Remember that all but one of the people there were really confederates. As they went around the table, each confederate gave the wrong answer. By the time they got to the real participant, he had already heard everyone else say an answer that was different from what he thought.

Believe it or not, most of the participants in the study gave the wrong answer. In fact, after doing the exercise several times with different cards, Asch found that about 75% of people changed their answer at least once to match the wrong answer given by the confederates.

The first answer is an example of informative conformity. Informative conformity is when people go along with a group because they think that the group must be right or must know something that they do not. This happens a lot when people are in a group with a powerful person, such as a boss or professor. When the boss starts saying something they disagree with, they think, 'Well, he's the boss, so he must be right,' or 'I guess my professor knows this better than I do.'

Asch's experiment was done in 1951, and it has had a lasting impact on the world of psychology. The study opened the door for other experiments on conformity and on related topics, such as obedience. In fact, the most famous obedience study, done by Stanley Milgram in the early 1960s, was directly inspired by Asch's experiment.

Asch himself did many variations on the study to see how different factors affected conformity. He found that a larger group and a harder task increased conformity. Meanwhile, he found that when people were allowed to answer privately or when the group was not unanimous, conformity decreased.

Some modern psychologists have found that the percentage of people who conform is significantly lower than what Asch found.

This might be because times have changed. In 1951, conformity was seen by and large as a good thing, but since then, independence has been seen as ideal. The difference in Asch's findings and those of others might also have to do with the people being tested. Asch used all white men of about the same age. When other races, genders, and ages are included in the group, things change.

No matter what the differences, though, Asch's original study remains an important one in the history of social psychology.

Solomon Asch was a social psychologist who studied conformity. In his most famous study, he found that people would often give the wrong answer to a question, even if they knew it was wrong, just to go along with the group. Out of this study, Asch identified two types of conformity: informative conformity, when people believe that they were wrong and the rest of the group was right, and normative conformity, when people believe that they are correct but go along with the group to fit in.

What did Asch find caused LESS conformity in his studies?

Sperm's Journey from the Testes to Urethral Orifice

What Is Social Psychology? - Definition & Professions in the Field

What is Cognitive Psychology? - Definition & Theories