Statistics can be a powerful tool in research. Unfortunately, statistics can also have faults. In this lesson, you will learn about the faults in statistics and how to critically examine research. Updated: 10/15/2019
Create an account

Statistics are pretty useful tools when placed in the proper hands. They can help politicians figure out how to best plan their campaigns, alert educators to students with exceptional needs, assist researchers in creating new medications, or provide businesses with some idea of how their customers act. However, in unskilled hands, statistics can be more trouble than they're actually worth. Even when intent is honest, statistical analysis can often prove things that are far from true. In this lesson, we're going to look at two particular problems that affect statistics, as well as looking at examples of their incidence. 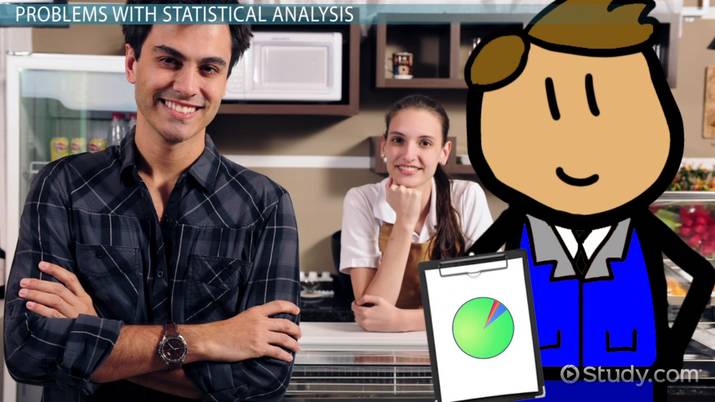 Coming up next: Confounding Variables in Statistics: Definition & Examples

When planning a statistical analysis, whether it is a simple poll or a double-blind study, researchers should be wary of introducing any sort of problem into the sample. After all, figuring out what a set of data predicts is often hard enough without having to sort through added mistakes! Any sort of problem that lessens the likelihood of statistical data to be able to present a firm and realistic set of answers is called confounding. Confounding can happen when a data set is corrupted through poor gathering techniques, as well as when the whole experiment itself is set up without enough controls. Controls are the methods used by statisticians to make sure that only the issue at hand is being examined. For example, if you were going to ask a group of affluent people where they went to the grocery store, some controls would include only asking wealthy people or only asking people who live in an area with many grocery stores. Likewise, if you were preparing a double blind study to see if one soft drink was more popular than another, you would control for race, gender, and economic background.

Whereas confounding refers to issues with the structure of the data gathering, bias refers to a problem with the way the data is gathered. The final result of this is a data set that is drastically different from the reality. There are many ways to create bias in data. Selection bias occurs when only certain individuals are chosen to answer a question. In one of the examples above, we were interested in finding out the grocery shopping habits of wealthy people. Remember, confounding would happen by not using controls like asking people with a choice of grocery stores. Selection bias would be only polling people who shop at one location and extrapolating their answers into more generalized data. It could be that the site is actually quite unpopular, but your data would predict otherwise. In fact, if the study was being paid for by the grocery store in question, you could have allegations of funding bias, in which questions could be asked about the objectivity of the study due to the source of funding to the study. Furthermore, recall bias, in which a person cannot accurately recall exact events, could happen when a person is asked how many times they visited several stores over the past year. Finally, observer bias could occur if the person is swayed by the person asking the questions. If someone is even hinting at what could be a correct response, it could be enough to convince someone to let them hear what they want to hear.

Even the best polls and surveys suffer from the danger of confounding and bias. Confounding exists when data gathering is not properly structured with sufficient controls. Remember that a control helps to make sure that only the variable in question is tested by limiting the input of other factors. Bias, on the other hand, is a problem with the study itself, not the way it is structured.

Bias can exist in many forms, including:

What is Tertiary Prevention? - Definition & Examples

Bias Types & Examples | What Does it Mean to be Biased?

What is Factorial Design? - Definition & Example