Conifers are trees that use pinecones to reproduce. Learn about the different species and types of conifers, explore their main characteristics, and discover how they use pinecones to spread seeds and pollen for reproduction. Updated: 09/07/2021
Create an account

They are the giant towering redwoods of California. They make up the thick Northern forests from which we get lumber for our homes and furniture. They're used to decorate many of our houses every Christmas. And they provide endless homes for forest creatures, such as squirrels, raccoons, and countless birds. Some may call them pine trees, some say evergreens, but the correct term is conifers.

Conifers are trees with needles or scaly leaves that produce pinecones as a reproductive structure. 'Conifer' is derived from the Greek word konos, meaning 'cone,' and phero, meaning 'carry.' 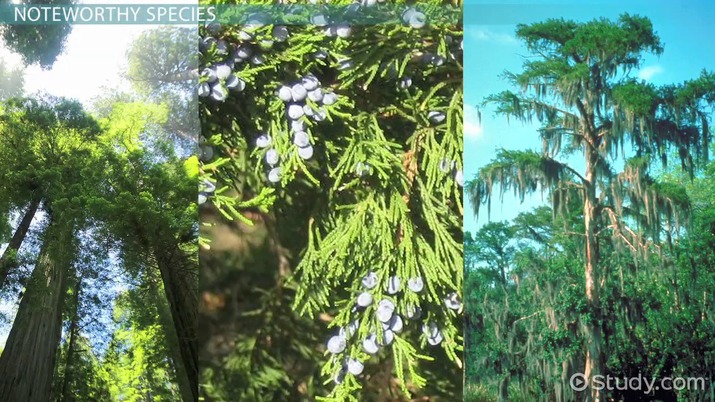 Try it now
Back
Coming up next: Dicot: Cross Section, Definition & Plant Examples

Conifers belong to a greater classification of trees called gymnosperms, including those trees whose seeds are not enclosed inside a fruit. Gymnosperm means 'naked seed.'

Many of us are familiar with the general characteristics of conifers. We know them as trees that have needles instead of leaves. Most of them are evergreens, meaning they don't lose their needles in the winter and they stay green all year round. And most importantly, conifers produce pinecones.

But conifers can vary greatly, ranging from massive giants to small shrubs. They can thrive in wet climates or in the high desert. Needles can be short or long, smooth or scaly. And the cones they produce can also vary greatly in size and shape.

Conifers tend to be classified by their needle type. While some are flat, square, long, or short, others may be sharp and pointy, or soft and scaly. Some are awl-like, and some are flat and pointed like a blade. Although there are over 500 conifer species, many fall into one of four categories: spruces, firs, pines, and cedars.

Trees in the spruce family have very stiff needles, some of which are very sharp. The needles are also fairly short, up to about 1/2 inch long. If you have ever bumped up against a blue spruce, you don't need to be reminded about their sharp needles.

By contrast, the needles of trees in the pine family are quite different and typically found in bundles of two to five, depending on the tree. These needles can also be quite long, as in the case of the ponderosa pine, which can be up to ten inches long. These needles are much softer than those of the spruce and more flexible.

Fir trees have needles of average length, about one inch. Firs, such as the noble fir, are a top choice for many people when it comes to choosing a Christmas tree.

The cedar tree is unique in that its needles are very soft, flexible, and flat. They tend to grow in damp climates and have the potential to become quite fat and tall.

As we mentioned earlier in the lesson, there are over 500 species of conifers. Let's look at a few of the more interesting and unique species.

For example, the California redwood is the tallest living organism in the world, measuring over 300 feet tall. The giant sequoia can grow to a height of over 300 feet and develop a girth of over 50 feet.

The larch tree is another species of conifer, typically found in cold European climates. As a deciduous (instead of an evergreen) conifer, it changes color and loses its needles in the winter. The bald cypress is another example of a deciduous conifer.

You may recognize a juniper as a scrubby tree or bush with scaly or traditional needles, which grows well in dry climates. Arborvitae is a shrubby tree with flat, scaly needles that can be grown as a privacy screen.

As previously mentioned, pinecones are reproductive structures. What does this mean when it comes to a tree? To reproduce, the tree must somehow sow its seeds. This is where a pinecone comes into play. A pinecone contains the developing seeds within its scaly structures.

Conifers have two types of pinecones: larger, woody ones called ovulate cones and pollen cones, which function like sperm.

Ovulate cones contain the ovule, much like an egg in reproductive terms. When the tree pollinates, the wind blows pollen from the pollen cone to the ovulate cone. Fertilization occurs, but maturation of the ovulate cone usually takes more than a year. A tiny tree embryo within a seed coat eventually falls to the ground and takes root.

There are two main ways in which the seeds of conifers are distributed: wind and dispersal. Seeds carried by the wind tend to be light and contain a structure, like a wing, which allows them to be carried far away. Animals are key to the dispersal process in that they either stash seeds to eat later, or abandon them, whereby the seed germinates and produces a seedling.

In juniper and arborvitae conifers, the female seed cones resemble bluish berries. Berries found on the juniper tree are used to flavor gin.

Conifers are trees that have pinecones as their reproductive structures. Pinecones are important because they contain developing seeds, produce pollen, and help conifers reproduce. Conifers are members of the gymnosperm family, or trees with seeds not enclosed within a fruit.

Conifers are typically evergreen and have needles instead of leaves, which can help to classify them. For example, the needles of a juniper conifer, a unique species of conifers, are flat and scaly. There are more than 500 different kinds of conifers; the most common types include spruces, firs, pines, and cedars.