What Is Conservation of Momentum?

Conservation of momentum says that momentum is neither created nor destroyed, it only moves from one place to another. So, if two cars hit each other in a crash, all that momentum goes somewhere. The reason it seems like it disappears is that momentum can be absorbed into the earth. 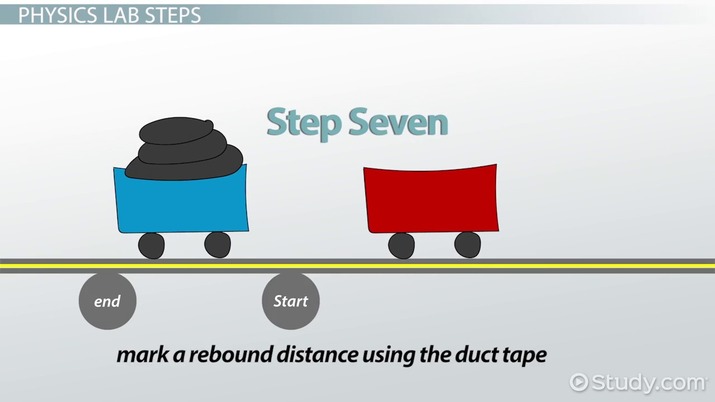 For this physics lab, you will need:

Step 1: Add some mass to one of the carts so that the two carts have different overall masses. Measure the masses of each (including the cart) on a scale and write it down.

Step 6: Press the starter again. This time, use the stopwatch to measure the time it takes for the lighter cart to travel the marked distance. Write it down and repeat five times.

Step 7: If the heavier cart rebounds or otherwise continues to move after impact, mark a rebound distance using the duct tape, and measure the time it takes to travel that distance, too. Write it down and repeat five times.

Average your sets of five trials to find the average time in each case. Use the speed = distance / time equation, to calculate how fast each cart was traveling in the period you timed it for.

You can collect your data in a table. If you haven't already, now it's time to pause the video and get started. Good luck!

To analyze this data, we want to check to see if conservation of momentum holds. Clearly, it won't be perfect, because nobody is perfect at using a stopwatch and measuring distances. But we can still have a go at seeing how close we can get our data.

This equation is the equation for conservation of momentum:

Plug all your numbers in and solve both sides, and see how close to equal they really are.

They should be pretty close; though even with air tracks, the earth does take some of the momentum. If they're not close, ask yourself what you could have done differently in your experiment to improve your data. Spend some time analyzing and thinking, and maybe try it again.

It's worth noting that the biggest source of error (otherwise known as uncertainty) in the experiment, by far, is the timing for pressing the stopwatch buttons -- and every experiment has some uncertainty. The best we can do is reduce and minimize it.

This is the equation for conservation of momentum: (m1*v1 + m2*v2) before = (m1*v1 + m2*v2) after. So if we can make two objects collide, measure the masses, and their velocities before and after the collision, we can use this to confirm that momentum is indeed conserved. Though, this will only work if there isn't much friction, and momentum isn't transferred to the earth itself.

Project Based Learning for Science

Project Based Learning for Science