The use of sounds, words, and/or phrases help create mood or develop characters in written works. Discover examples of how consonance, assonance, and repetition add to the plot and/or mood of literary works. Updated: 08/26/2021
Create an account

One of the best pieces of advice I ever received about reading Shakespeare came from my high school theater teacher. My teacher told us that when Shakespeare repeated something - sounds, words or phrases - he was trying to tell you something.

When a character keeps using words that contain an 's' sound, they end up sounding a lot like a snake (or a Disney villain), revealing that they shouldn't be trusted. When characters like Hamlet and Lady Macbeth repeat the same word over and over, they demonstrate their growing madness and fixation on a single idea.

It makes sense if you think about it. Playwrights like Shakespeare need to convey emotion as quickly as possible and what better way to do that than through word choice and repetition? Repeated sounds can mirror the mood of a piece, while a word or phrase repeated over and over hits the reader over the head with intent.

This lesson focuses on three literary devices that use careful word choice: consonance, assonance and repetition. All three are repeated sounds, words or phrases that add to a work of literature, developing characters, adding to tone and strengthening dialogue. 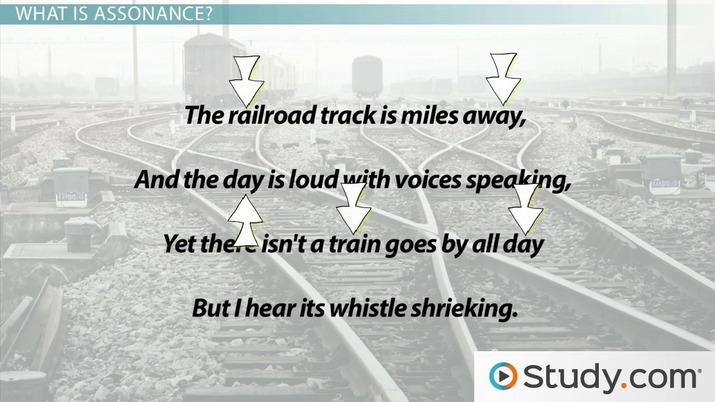 Consonance is the repetition of consonant sounds, often at the beginning of words. Tongue twisters are the most obvious use of consonance, as in 'Peter Piper picked a peck of pickled peppers.' American writer Edgar Allan Poe used consonance to great effect in his gothic poem, 'The Raven' (1845). Listen for the repeated sounds:

'And the silken, sad, uncertain rustling of each purple curtain

Thrilled me - filled me with fantastic terrors never felt before.'

The first line of this excerpt contains four repeated 's' sounds, from the s's in 'silken,' 'sad' and 'rustling,' and the soft 'c' in 'uncertain.' Did you notice that the phrase 'silken, sad, uncertain' sounds a lot like the sound made by rustling curtains? In the second line, the repetition of the 'f' sound in the words 'filled,' 'fantastic,' 'felt' and 'before' is similar to a cartoon character stuttering in f-f-f-fear. Both sets of repeated sounds add to the spooky vibe Poe is known for.

'The railroad track is miles away,

And the day is loud with voices speaking,

Yet there isn't a train goes by all day

But I hear its whistle shrieking.'

The long 'a' sound is repeated in 'railroad,' 'away,' 'day, 'train' and 'day' (again) and makes an end rhyme at the end of the first and third lines with 'away' and 'day.' Along with giving the poem that familiar singsong quality rhyming poems have, the repeated sounds have a cadence much like the sound of a railroad train chugging along. The rhyming ends up mirroring the content of the poem.

The king of clever rhymes, Dr. Seuss, uses consonance and assonance to create rhyming couplets - two lines of verse, one right after the other, that have rhyming end sounds. Take, for example, the rhyming couplet at the beginning of 'West Beast East Beast.'

'Upon an island hard to reach,

The East Beast sits upon his beach.'

The two lines contains four words with the long 'e' sound, 'reach,' 'east,' 'beast' and 'beach,' making them upbeat and fun to read aloud to kids.

Repetition of words and phrases is so common in literature that it is often overlooked as a literary device. Repetition is used by authors and poets in a lot of different ways and with varying effects. Poe, for example, was a big fan of repetition. In 'The Raven,' he repeats the same phrase at the end of two lines.

'So that now, to still the beating of my heart, I stood repeating

'Tis some visitor entreating entrance at my chamber door -

Some late visitor entreating entrance at my chamber door; -

This is it and nothing more.'

The repetition adds to the plot and mood of the poem. The speaker, terrified by a late night intruder at his door, repeats himself, looking to understand what is happening. The effect is that we, as readers, grow terrified too.

Repetition can reoccur at the beginning, middle or end of the lines of verse. (Or the beginning and end as in, 'The king is dead; long live the king.') One word can be used throughout a paragraph or the same sentence. There are even times when a word or phrase is used twice to make a play on the word's meanings.

In Shakespeare's Henry V, a character shares his plans to go abroad to pursue a life as a thief: 'To England will I steal, and there I'll steal,' he says, a pun using the different meanings of the word 'steal.'

How to Identify Errors in Idiomatic Expressions