Richard Cardenas has taught Physics for 15 years. He has a Ph.D. in Physics with a focus on Biological Physics.

Constant motion refers to any type of motion when either the distance traveled by the object is the same for each second, or the speed of the object changes by the same amount each second. 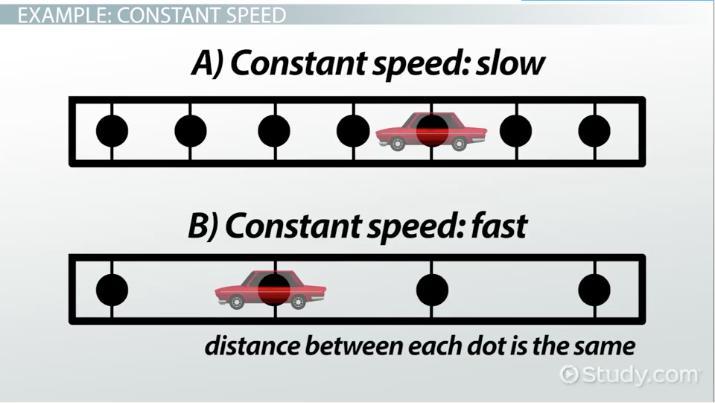 Coming up next: Convection in Science: Definition, Equation & Examples

Now let's discuss an example of constant motion. Let's say you are driving interstate I-10 from San Antonio to El Paso, Texas. Most of the sections of this path are fairly flat and straight. You reach a cruising speed of 75 mph when you decide to engage your cruise control. The cruise control system keeps the vehicle speed at 75 mph until you hit the brakes or accelerate. While you are using the cruise control, you are moving with constant speed. This table illustrates the distance traveled during a four-hour trip on cruise control.

These figures illustrate constant speed using dots. Each dot shows the location of the object for each one second interval. Figure A represents a slow-moving object since the dots are closer together. Figure B represents a fast-moving object since the dots are farther apart each second. Note that the distance between each dot is the same in each figure. Therefore, the object represented by the dot is moving with constant speed in both cases. These figures make up what we call a motion diagram.

The position versus time graph below illustrates constant speed in a different way. During each second, the object moves the same distance.

Both of these types of motion occur when you parachute from an airplane. As soon as you jump out of the airplane, you are falling at a rate of about 10 m/s for each second of the fall. However, when the strength of the air resistance is equal to your weight, you reach what is called terminal velocity, or terminal speed. When you reach terminal speed, you are no longer accelerating and you fall with the same speed until you deploy your parachute.

Finding Distance with the Pythagorean Theorem

What Is a Compound? - Combining Elements with Chemical Bonds

Scalars and Vectors: Definition and Difference

The Normal Force: Definition and Examples