Copyright
Lesson Transcript
Instructor: Crystal Ladwig
How would you feel if you saw people being bullied or even beaten just because of what they believed? Constantine saw that happen, and it changed his life forever. Read on to find out what this Roman Emperor did about it. Updated: 06/04/2020
Create an account

You may have heard of Emperor Constantine, the first Christian emperor of the Roman Empire. Even if you have, you may not know everything about his life, which is what we'll be looking at today.

Flavius Valerius Constantinus, later to be known as Constantine I, was born about the year 280 CE in what is now the country of Serbia. His father was a military man who rose through the ranks and eventually became one of the leaders of the Western Roman Empire.

As a boy, young Constantine was sent to live with the Eastern Roman Emperor and learned Latin, Greek, and philosophy. He also became a warrior. It was during this time that Constantine probably saw a lot of persecution of Christians. This means that people who believed in and practiced the Christian faith were punished for those beliefs, sometimes violently. 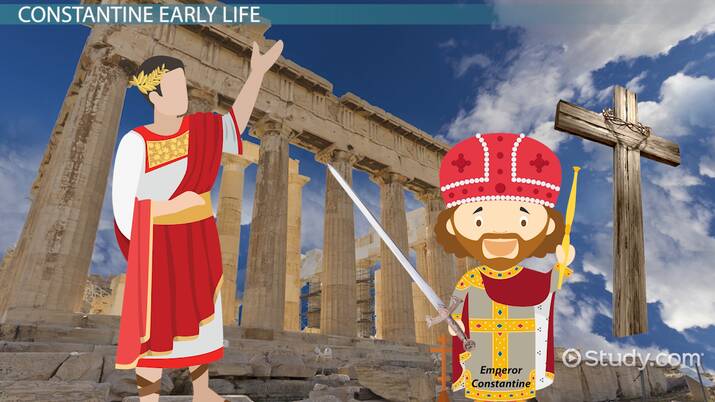 Coming up next: Fall of Rome Lesson for Kids

As emperor, Constantine made revolutionary changes. Crediting much of his success to his new Christian faith and likely remembering how he'd seen Christians persecuted as a young man, Constantine took action to stop the mistreatment of people based on their beliefs. Constantine was one of the leaders that issued the order known as the Edict of Milan, which legalized Christianity and allowed people to worship freely.

During his reign as Roman Emperor, Constantine called together the Council of Nicea. He wanted this council of Christian leaders to clarify several religious questions, including who Jesus was. Out of this council came the Nicene Creed (or statement of faith), which declared that Jesus was a divine (godly) being and the Son of God.

Constantine died at the age of 57 on May 22, 337 CE, just after he was baptized as a Christian. He was buried in Constantinople in the Church of the Apostles.

All right, let's review what we've learned about Constantine. Constantine the Great, also called Constantine I, was the first Christian emperor of the Roman Empire. With the signing of the Edict of Milan, he officially ended the persecution of Christians. In the Council of Nicea, Constantine organized Christian leaders to clarify basic ideas about the Christian faith, which still thrive today in the Catholic Church. This is why it makes sense that his name carries so much weight today.

The Conversion of Constantine and the Ascent of Christianity

Frankish History: Clovis and the Merovingians

The Great Schism Between the East and Western Churches

The Western Schism and the Tale of 3 Popes

Importance of Julius Caesar to History