Kelly has taught fifth grade language arts and adult ESL. She has a master's degree in education and a graduate certificate in TESOL.

For thousands of years, people have seen shapes and patterns made by the stars in the sky. The shapes we recognize today, known as 'constellations,' help people to understand time, space, and directions. Updated: 04/17/2020
Create an account

When we look up into the sky on a clear night, we can see thousands of stars. Sometimes we might even use our imaginations to see pictures in the stars. These pictures have a scientific name: constellations. It might be helpful to imagine a constellation as a connect-the-dot picture where the stars are the dots.

Finding pictures in the sky can be fun, but did you know that star pictures can also serve a purpose? Constellations have been used by people for thousands of years to give directions and tell time.

Astronomers are scientists who study outer space. These space experts have named 88 constellations that can be seen from planet Earth. Constellations give us outlines of people, objects, and animals that can help us learn about the earth and stars. 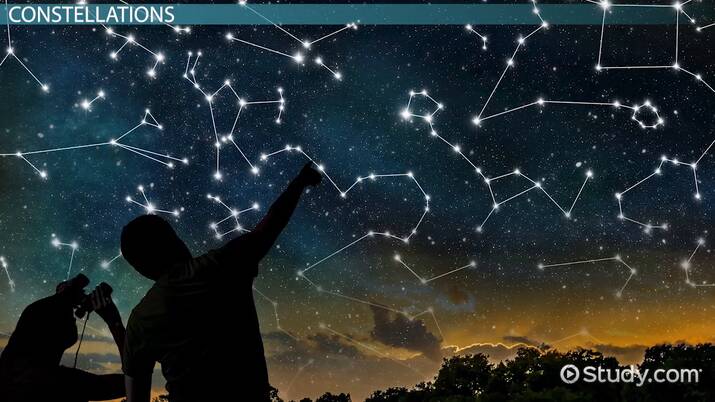 Coming up next: Astronauts Lesson for Kids

The Names of the Constellations

'Orion' is the name of a hunter in Greek mythology. You can see by this picture that it takes some imagination to see the shape of a hunter when the lines are not drawn!

You might have heard the name 'Hercules' in cartoons, movies, or books. This name also comes from Greek mythology. A constellation was named after this Greek hero.

Many constellation names come from other languages. For example, Ursa Major and Ursa Minor are Latin names for Big Bear and Little Bear. (The Big Dipper and Little Dipper are parts of these constellations.)

Constellations can help airplane pilots, ship captains, and other people find directions. This was especially important years ago when maps were not available. Some stars and constellations always point in a certain direction.

Constellations can also help people recognize the changing of seasons. Thousands of years ago, people did not have maps, computers, and televisions like we do today, so the stars were really helpful.

There are 88 constellations (star pictures) that astronomers (scientists who study outer space) use to identify stars in the sky. Many constellations are named for characters from myths from a long time ago. Other constellations look like everyday things and animals. Some of the names sound funny because they're not in languages that we know. Constellations help us to locate certain stars. They can also help us find directions when we do not have a map. On the next starry night, look up at the stars and see what you can see!

Facts About Saturn: Lesson for Kids