When two waves meet while traveling in the same medium, they disrupt each other in a process called interference, which produces an entirely new wave. Discover the two types of interference, constructive and destructive, and learn how a single wave can interfere with itself. Updated: 08/27/2021
Create an account

I remember when I was in elementary school I used to play jump rope with my friends at recess. We sometimes got bored with actually jumping over the rope and just started making waves with it. Each of us would hold one end of the rope, and we'd both swing our arms up and down, sending giant waves toward each other down the length of the rope. We noticed that the waves would sort of crash into each other, making the rope jump up and down in crazy patterns. Sometimes, though, we'd get the waves going so that they made a perfect pattern that seemed to stand in one place. Standing waves are intriguing phenomena that occur when two waves interfere with each other. To understand why they happen, let's learn more about how interference really works. 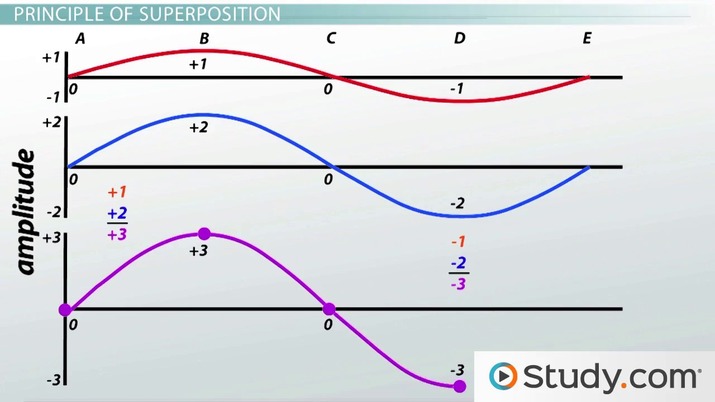 Try it now
Back
Coming up next: The Doppler Effect: Definition, Examples & Applications

Inevitably, some waves are going to cross over or meet with each other. When they do, the reaction between the waves is known as interference. This is the meeting of two or more waves traveling in the same medium. Waves meeting in the same medium actually disrupt each other's displacement. They interfere with each other so that the resulting wave is a completely new and different wave from either one of the original two.

Let's take a look at these two waves:

They're traveling toward each other in the same medium. One's traveling left and the other's traveling right. They both have the same amplitude of 1 meter. When the two waves meet up, there comes a moment when the crests of both waves end up in the same spot. Their crests overlap, and so their amplitudes add together. Instead of the crest being 1 meter tall, it's 2 meters tall!

Let's take our same two waves that we had before. They're still traveling toward each other and they're still 1 meter in amplitude each. But this time, it just so happens that the crest of one wave lines up with the trough of the other wave. Do you know what will happen to the overall amplitude? Well, there won't be any! The crest of the first wave will cancel out the trough of the other wave. The medium experiences zero displacement. The net result is a completely flat surface.

We'll take two waves that have the same wavelength. One has an amplitude of 1 meter; the other has an amplitude of 2. Let's say they interfere in such a way that all the crests and troughs line up together. So, we'll add up the displacement of both waves at every point, and that will give us the total displacement for the resulting wave when they meet.

It looks like we got some constructive interference here. Our waves of amplitudes 1 and 2 gave us a resulting wave with a total amplitude of 3.

The exercise we just did illustrates the principle of superposition, the basic rule that tells us how to find the resulting wave from the interference of two different waves. You just treat all the crests as positive numbers and all the troughs as negative numbers. Then, you add up the displacement of the waves for every point. For two interfering waves, the displacement of the medium at any point is the sum of displacements of the waves at that point.

Let's try lining up these waves in a different way. We'll shift our second wave over so that its crest lines up with the trough of the first one. Now, at point A we still have a sum of 0, and the same is true for points C and E. But at point B, the plus 1 for the first wave is countered by the minus 2 of the second wave.

This shows a little bit of destructive interference, meaning our resulting amplitude is a measly minus 1. At point D, our minus 1 trough is countered by the plus 2 crest. So, the amplitude here is plus 1.

As you can see below, the principle of superposition helps us find the resulting amplitude for every point along two interfering waves.

It's one thing to talk about waves that meet each other in a big open space, like the ocean, but waves can also interfere with themselves when they are reflected off another object. For example, if I'm holding one end of a jump rope and my friend is holding the other, then I can send a wave through the jump rope that will reflect off of my friend's hand and travel back toward me. If I'm still sending more and more waves down, then these will interfere with the waves that are traveling back. Interference occurs between the incident and reflected waves, and it usually looks pretty messy.

However, if I time my wave propagation just right, I can get it so that the reflected waves line up perfectly with the incident waves. That is, each reflected wave interferes constructively with an incident wave. The waves double back on each other in such a way that some parts of the medium appear to be perfectly still.

This type of phenomenon is called a standing wave. It's called 'standing' because it really looks like it is standing in place instead of traveling along the length of the rope. In reality, the incident and reflected waves are traveling back and forth. They're traveling at just the right frequency to converge on each other and add together through constructive interference.

Because there has to be a reflective surface, standing waves only occur in media that are contained. For example, a guitar string is contained by its attachments to the guitar at both ends. When the string is played, it forms a standing wave between the two stationary ends. Standing waves are also generated in wind instruments like flutes. The ends of the flute act as containers for the medium, which is the column of air inside. The different notes that the flute can play are related to the different types of standing waves that are made within the column.

Standing waves might seem like a completely different type of wave altogether. But really, they're just the result of constructive interference between reflected waves. A standing wave is simply a special case where interference and reflection work in perfect harmony.

Interference is the meeting of two waves that are traveling in the same medium. When two waves meet, they disrupt each other's displacement to form a completely new resulting wave. The principle of superposition describes how the amplitudes of each wave are added together to determine the amplitude of the resulting wave at every point.

Standing waves are phenomena that occur when waves are contained and reflect back on themselves through the medium. This combination of reflection and constructive interference produces a wave that appears to be standing in place.

After watching this video, you'll be able to: