Contrapuntal motion is an element in music that describes how different lines in music affect and interact with each other. Learn about the definition of contrapuntal motion as well as parallel, similar, contrary, and oblique types of motions. Updated: 12/29/2021
Create an account

Imagine building a four-lane road. Each lane needs to bend and twist in order to avoid mountains and rivers and structures, but they don't necessarily have to move in the same direction. One can curve east, the other west. Ultimately, there are only two things that matter: that they all get to the same destination and that they don't run into each other.

Writing for four-part music is pretty similar. You've got four lines of music (the soprano, alto, tenor, and bass), and they need to all work together to move the melody and harmony along. However, they can move in different ways.

We call the relationship between the movements of any two lines contrapuntal motion. It's a big part of how we ensure that each line stays active without crashing into the other lines. The point of having four-point music is to have four parts - there's no merging lanes on this music expressway! 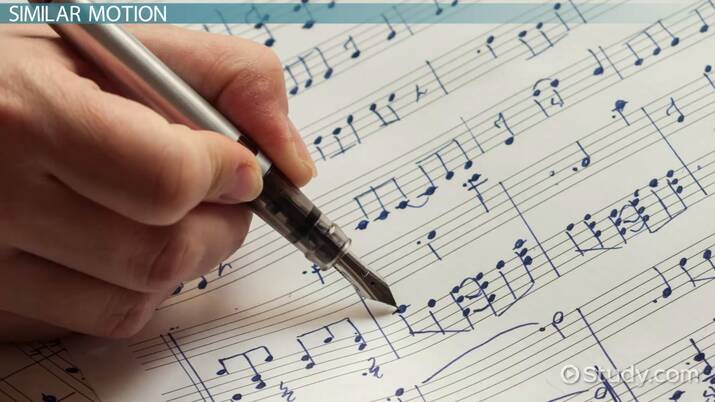 In general, there are four basic forms of contrapuntal motion that help design the pathways of each individual line, or voice. The first is parallel motion, a form of contrapuntal motion in which two voices move in a certain direction. Both voices move in the same direction (up or down) and by the same intervals. If you drew a line connecting the notes in each voice, you'd literally have two parallel lines.

Imagine that your soprano voice contained the notes G, E, C, E, G, upper C (the first six notes of the Star Spangled Banner, where you sing ''o-oh say can you see''). If you wanted your alto voice to develop in parallel motion to the soprano, you'd follow the same structure (down a third, down a third, up a third, up a third, up a fourth). So, if your alto voice started on A, the full line would be A, F, D, F, A, upper D. The structure is exactly the same, as is the interval between each note in both lines.

There's something you need to watch out for here. In our example, the two lines are a seventh apart (A to G is a seventh, F to E is a seventh, etc.). When building parallel motions, you want to avoid creating multiple notes in a row that have an interval of a fifth or an octave between the two voices. For example, if one line has a G, E, C, the line above it can't be D, B, G. Yes, that's parallel motion, but parallels of a fifth or octave are so similar that the voices become basically indistinguishable. We call this a parallel or consecutive fifth or octave. It's definitely something you want to avoid.

But, what if you don't want to develop two voices with parallel motion? You could have them build in the same direction, but at different intervals. That's called similar motion. For example, both lines could be getting higher, but the intervals between the notes changes.

If we consider that line from the Star Spangled Banner of G, E, C, E, G, upper C, our motion is down, down, up, up, up. In parallel motion, our second line changed at the same intervals. But with similar motion, we could do something like this: A, F, E, F, G, A. The intervals between the lines changed, even if the direction of each voice stayed the same.

Now consider this: both voices move in different directions: one gets higher, while the other voice gets lower. That's called contrary motion. So, if the Star Spangled Banner has a motion of down, down, up, up, up, then contrary motion would create a voice that goes up, up, down, down, down.

The last of the main forms of contrapuntal motion is oblique motion. Let's start with our star-spangled line of G, E, C, E, G, upper C: that's one voice. With oblique motion, our second voice would look like this: B, B, B, B, B, B, where one voice moves up and down and the other voice remains the same. You can play that stagnant voice as six independent notes, or as a single whole note. Either way, you have one voice establishing a drone or possibly a pedal tone, while the other develops melodically. As long as both lines get to where they're going, this is a perfectly valid form of motion.

Let's review. In four-part music, it's important to maintain the distinction between all four lines. This means paying attention to contrapuntal motion, or the movement between two lines relative to each other.

There are four main kinds of contrapuntal motion:

By understanding these kinds of contrapuntal motion, you can develop all four lines while keeping each independent and distinct. Otherwise, your composition may just crash and burn!

Ostinato Music: History & Examples | What is an Ostinato?

What Is a Phrase in Music? | Antecedent & Consequent in Music

Sonata Form Music, Structure & Examples | What is a Sonata?

Melodic Contour Overview & Examples | What is a Contour in Music?