That sounds pretty straightforward at first. All Hannah has to do is to give her drug to a bunch of depressed people, and if they feel better, she's proved her point, right? Well, it might not be so simple. There are a lot of things that could cause people to be less depressed. What if the people Hannah gives the drugs to start to feel better for some reason other than the fact that they got the drug?

Extraneous variables are factors other than the independent variable that might affect the dependent variable. For example, maybe the people to whom Hannah gives the drugs think, 'Since she's giving me the drugs, I'm going to start feeling better.' Maybe, in anticipation of feeling better, they start exercising and eating better. These are things that could affect depression levels. So, maybe they're less depressed at the end of the study because of their lifestyle changes, not Hannah's drug. Let's look at some ways to control for extraneous variables. 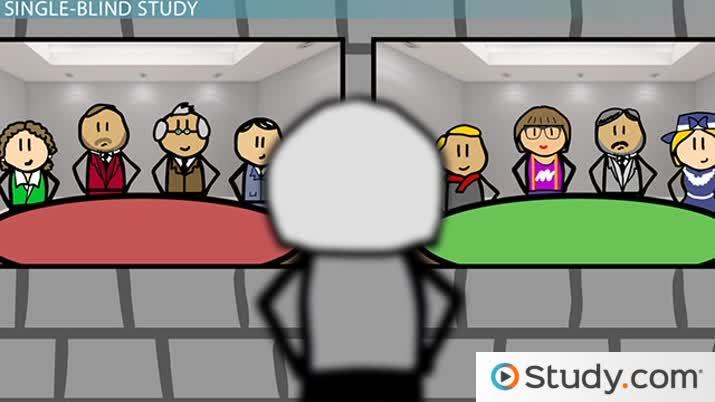 Coming up next: What is External Validity in Research? - Definition & Examples

But, there's a problem with that: if she gives the treatment group a pill and doesn't give the control group anything at all, the results might not be reliable. This could be for a couple of different reasons. First, the people in the treatment group might tell Hannah what they think she wants to hear; they'll say, 'Yeah, your drug works. I feel much better.'

A single-blind study could help Hannah eliminate the reactions of the subjects, but there is still another issue that might crop up: what about Hannah's own reactions? Imagine that Hannah interviews each subject at the end of the study. She has to figure out how depressed each subject is. Because they don't know which group they're in, the subjects are all truthful.

But, Hannah still has to take what they say and do and give them a number: 1 for not depressed at all and 10 for very, very depressed. By listening to their thoughts and observing their actions, Hannah can see clues as to how depressed each patient is, and she makes a determination about what number to give them. The problem is that Hannah really wants her drug to be better than the placebo. She might score the people given her drug as less depressed, either intentionally or subconsciously.

A double-blind study is when neither the subjects nor the researcher knows which group each subject is in. For example, Hannah could have another person assign the subjects to the treatment or control groups and not tell her. Then, after the study has been done and Hannah has already scored all of the subjects, she can find out which subject is in which group.

In research, an extraneous variable is a factor that is not the independent variable but still affects the dependent variable. One example of an extraneous variable is the placebo effect, which occurs when a person feels better just because they're given a treatment, even if that treatment doesn't do anything. One way to control for the placebo effect is through a single-blind study, in which subjects don't know whether they are getting a real treatment or a placebo. An even more rigorous experimental design is a double-blind study, in which neither the subjects nor the researcher knows who is getting the real treatment and who is getting the placebo.

Once this lesson has been completed, you may find that you can:

Why is Evidence Based Practice Important?

What Is a Non-Traditional Family? - Definition of Options

Validity and Reliability: How to Assess the Quality of a Research Study