Definition of a State

Throughout time, states have switched alliances. For instance, the American Revolution saw the American colonies fighting against Britain. However, both World Wars saw the US and Britain joining forces to take on Germany, while modern-day times have seen all three of these states stand together against the Eastern Block of the former Soviet Union.

Putting things simply, when it's in their best interest, states will choose to cooperate with one another. Today's lesson will explore this concept of political cooperation, specifically in the form of military and economic alliances.

However, before we get to these alliances, we should probably take a few steps back and define what we mean by a 'state'. A state is an autonomous political unit, including many communities within its territories, over which it has legitimate centralized power. Breaking this definition down, a state is a sovereign entity holding supreme rule over its territory. For this reason, the world's modern nations fall under the broad umbrella of being states. With this in mind, let's get moving on to political cooperation. 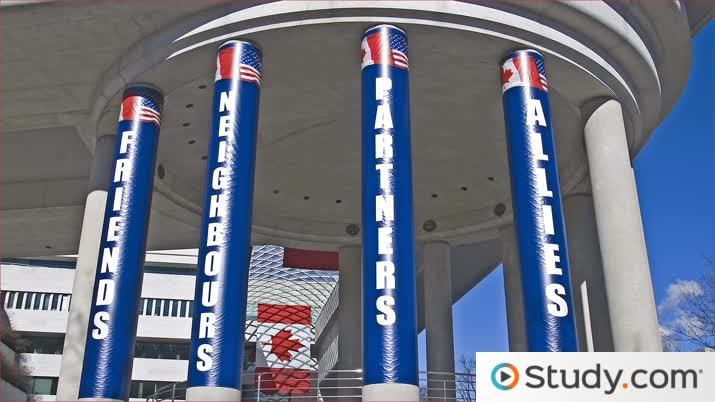 Coming up next: What Is IPAT? - Factors of the Human Impact on the Environment

Being more of a concept than a term, political cooperation broadly denotes the governments of differing states working together toward a common goal. This cooperation can occur in areas like military alliances, economic affairs, and the deciding of territorial boundaries.

When speaking of political cooperation, it often comes by way of treaties. Again, speaking rather broadly, a treaty is formally approved agreement between two states. One of the world's most famous modern day treaties was the Treaty of Versailles, which signaled the end of World War I. Speaking of war, let's move into the idea of military alliances between states.

Again, being more of a concept than a clear term, military alliances can be loosely described as collaborations between the armed forces of two states. Adding to this, it can also denote agreements between states surrounding the use of sanctioned force. Probably one of the best examples of military alliance occurred during World War II, as countries like the US, Britain, and France stood together fighting side by side against Nazi Germany.

Interestingly, military alliances don't just take place during times of war. Many times, military cooperation exists almost as a promise to come to the aid of another country should the need arise, sort of a 'we've got your back' kind of situation. One of the world's strongest examples of this can be found in US and British relations. Almost sounding like high-schoolers dating, the term for this close alliance is actually termed the special relationship, or the exceptionally close political, military, and economic relations that exists between nations. Historically, this terminology is used in reference to the US and the United Kingdom.

A great example of an economic alliance is NAFTA, the North Atlantic Free Trade Agreement, which removed many tariffs between the three countries of Mexico, Canada, and the United States. Jumping across the Atlantic, another example of an economic alliance can be found in the European Union. Often referred to simply as the EU, this is a group of European countries which have agreed to recognize the Euro as an official currency.

A state is an autonomous political unit, including many communities within its territories, over which it has legitimate centralized power. A state is a sovereign entity holding supreme rule over its territory.

Throughout history, many states have chosen to partake in political cooperation, the governments of differing states working together toward a common goal. A great example of this is the United Nations an intergovernmental organization tasked with the job of promoting and maintaining political cooperation among the world's nations.

Political cooperation also takes the form of economic alliances, collaborations between states in the area of money, resources, and wealth. Economic alliances have boomed since the onset of economic globalization, the financial integration and interdependence of economies across the world.

View this lesson in preparation to:

The Nature of Modern Wars & Conflicts

State Types, Development & Examples | What is a State?

Effects of the Cold War in South Africa & Nigeria