Countee Cullen was an important poet at the center of the Harlem Renaissance. Explore an analysis of his landmark poem, 'Heritage,' and discover its impact on the era. Updated: 09/27/2021
Create an account

With very few exceptions, the American cultural scene, including writers, thinkers and musicians, was dominated by white artists pretty much right through World War I. Then came the Harlem Renaissance. The Harlem Renaissance was a major cultural movement in the 1920s and 1930s in which African American artists moved into the mainstream. What had been sporadic voices became a flood of amazing talent, offering their own perspectives, history and culture.

It was the age of W.E.B. Du Bois and Marcus Garvey. Jazz, that uniquely American music, became huge in both popularity and importance, as audiences first heard Billie Holiday, Louis Armstrong and Ella Fitzgerald. And there were exceptional works published by authors, including Langston Hughes, Zora Neale Hurston and Claude McKay. 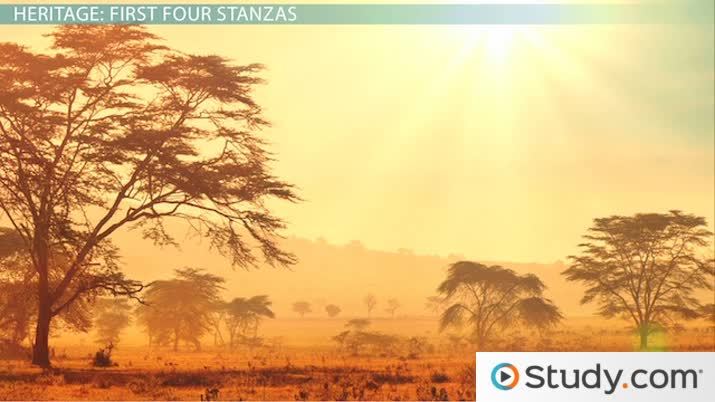 Coming up next: Zora Neale Hurston's Their Eyes Were Watching God: Summary & Analysis

There was also poet Countee Cullen. He was at the center of the Harlem Renaissance, literally and figuratively. He came of age in Harlem, burning brightly for several years. How significant was he? Well, when he married W.E.B. Du Bois's daughter, Nina Yolande Du Bois, in 1928, it was the black community's royal wedding, with thousands attending. Its significance was akin to Michael Jackson marrying Lisa Marie Presley. (And, in fact, both marriages ended badly after just two years.)

In this lesson, we're going to focus on one of Cullen's major poems: 'Heritage.' This poem was published in his debut collection from 1925, Color.

'What is Africa to me:

Women from whose loins I sprang

When the birds of Eden sang?

From the scenes his fathers loved,

What is Africa to me?'

This first stanza delivers the central question of the poem. For an African American man in the 1920s, what is Africa? It was three centuries earlier that his ancestors were stolen from its shores as slaves. He's never been there, so he's questioning what Africa means to him and his life.

In the second stanza, he elaborates:

'So I lie, who all day long

Want no sound except the song

Juggernauts of flesh that pass

Plighting troth beneath the sky.'

He is thinking, dreaming of Africa. He's using stock images - the juggernauts of flesh might be elephants - to describe a place he's never been. Then he romanticizes Africa with the lovers in the grass. Notice the powerful nature of the diction - words like barbaric and massive. Even the grass is defiant.

We soon get to his conflict:

'So I lie, whose fount of pride,

Is my somber flesh and skin,

With the dark blood dammed within

That, I fear, must burst the fine

Channels of the chafing net

Where they surge and foam and fret.'

He is connected to Africa through his skin color. With an allusion to the nets that brutally captured his ancestors, he describes his African pride that is deep within, wanting desperately to emerge. That pride is surging and foaming and fretting.

But in the third stanza, we learn how distant he feels from his homeland:

'Africa? A book one thumbs

Unremembered are her bats

Circling through the night, her cats

Crouching in the river reeds,

Africa is not a memory to him but a place in a book. Notice in those first two lines how dramatically the language softens. The book is 'thumbed, listlessly' while going to sleep. It's incredibly passive. And, again, this is a place he doesn't know from being there. He doesn't remember the bats or lions. They are 'unremembered.' He only knows them from a book.

When he goes on to say:

'What is last year's snow to me,

We see that he's not at home in America either. He's a man without a home. He's three centuries removed from Africa. And America has no ancestral meaning to him.

In the fourth stanza, there's more of this internal conflict:

'So I lie, who find no peace

Night or day, no slight release

Made by cruel padded feet

Walking through my body's street.'

The fifth stanza is a short one, but it packs a punch in bringing religion to the table:

Black men fashion out of rods,

Clay, and brittle bits of stone,

I belong to Jesus Christ,

Heathen gods are naught to me.'

Here, we see the contrast between the gods of Africans and the white, Christian God who was passed on by white evangelists and slave owners to the black community.

In the sixth stanza, he reflects further on his Christianity:

'Ever at Thy glowing altar

Must my heart grow sick and falter,

Wishing He I served were black,

Thinking then it would not lack

Precedent of pain to guide it,

Surely then this flesh would know

Yours had borne a kindred woe.'

In other words, if Jesus were black, our speaker would feel a closer connection to his suffering. His African ancestors made their gods in their own images, as most cultures do. But, as is still often too true today, Jesus is portrayed as a white man.

Then we get to the final stanza. Here, Cullen's inner turmoil is fully brought into focus. There is this perpetual war raging inside him, and it's always on the verge of bubbling over:

'All day long and all night through,

One thing only must I do:

Quench my pride and cool my blood,

Lest I perish in the flood.

Lest a hidden ember set

Timber that I thought was wet

Lest the grave restore its dead.

Not yet has my heart or head

In the least way realized

They and I are civilized.'

We could interpret this poem as saying that African Americans are in two worlds: Africa and America. Yet they fully exist in neither.

As a major poem of the Harlem Renaissance, 'Heritage' is a revelation. On one level, it describes a uniquely African American experience. It's a voice that wasn't represented in popular American poetry before the 1920s.

But like so much great art of the movement, it speaks more universal truths about the human condition. You don't need to be a descendent of slaves to identify with the themes in this poem. We all struggle with our identity and our place in society. We all grapple with finding our way in the context of those who came before us.

In this lesson, we explored Countee Cullen's 'Heritage.' This poem is one of the most representative works of the Harlem Renaissance, that amazing period in the 1920s and '30s when works of African American writers, musicians and thinkers exploded into the mainstream.

'Heritage' wrestles with the role of Africa in the hearts and minds of African Americans. In some ways, it is more a place in a book than a real part of themselves. The poem suggests that African Americans are stuck belonging to two worlds but wholly existing in neither. Like other great works of the Harlem Renaissance, though, 'Heritage' transcends the African American experience to offer insights into struggles we all face.

William Carlos Williams's Poems: 'The Red Wheelbarrow' and 'Landscape with the Fall of Icarus'

Robert Frost's Out, Out: Summary & Analysis

The Death of the Ball Turret Gunner: Summary & Analysis

The Lost Generation | Expatriate Writers of the 20th Century

On Being Brought from Africa to America by Phillis Wheatley: Summary & Analysis

Robert Frost Poetry Analysis | The Road Not Taken & Other Poems